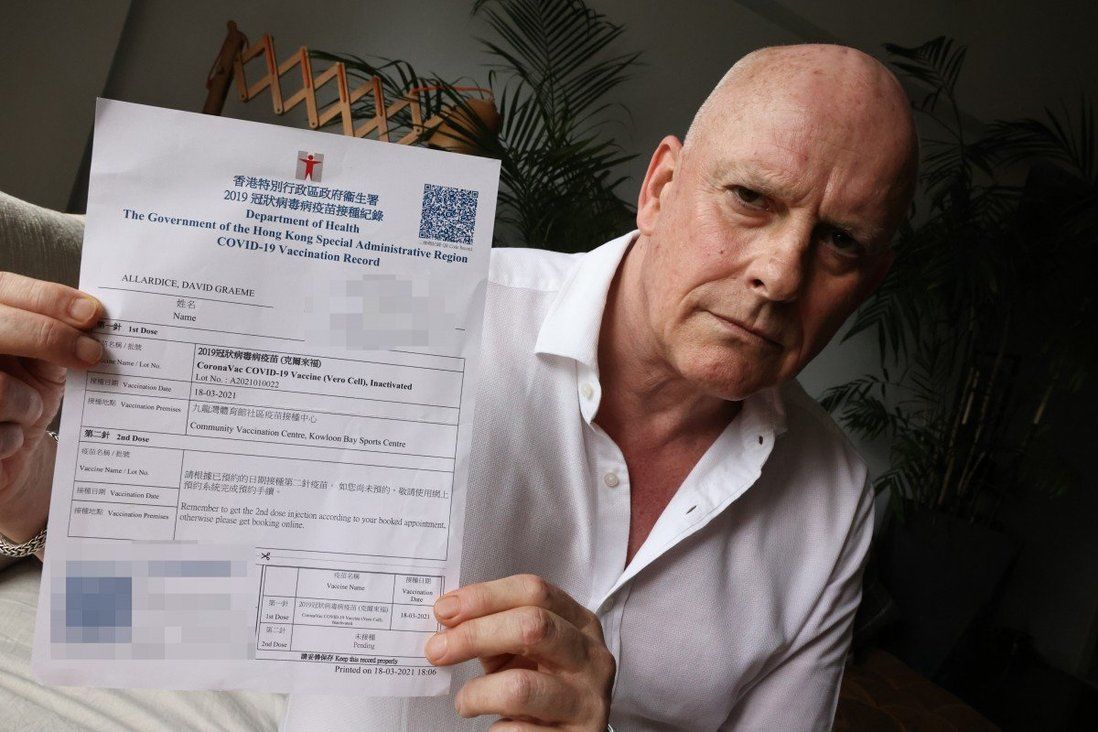 Blood cancer patient David Allardice was relieved to get his first dose of Covid-19 vaccine two weeks ago, putting him a step closer towards protection against the deadly respiratory disease.

But relief turned to shock when it emerged the 55-year-old Hong Kong resident had gone to the wrong vaccination centre – and was given the China-made Sinovac jab rather than the BioNTech one from Germany he actually booked.

The mix-up only came to light after the government sent him a text message saying he did not turn up to his vaccine appointment.

In fact, Allardice had turned up at the wrong venue, but was waved through without proper checks to be given a dose that he earlier made a deliberate decision not to have after consulting his doctor.

“I was desperate to get vaccinated so I could get a little bit of my life back. If I got Covid-19, I would not survive … I’ve lived with that panic for over a year now,” he told the Post.

“Only once I’ve had a second dose would I then have a greater degree of confidence to go out anywhere other than to chemotherapy.”

Allardice and his vaccination companion booked a 6.30pm BioNTech slot on March 18 at Hiu Kwong Street Sports Centre in Kwun Tong. But they mistakenly went to Kowloon Bay Sports Centre, which is about 3km away and only administers Sinovac jabs.

He recalled the two of them arrived at the centre at about 6pm and were directed inside after showing their identity cards.

“I don’t think anyone checked whether I had a booking or not. It didn’t seem very obvious. But if they had checked, there would have been no booking at Kowloon Bay.

“It seems quite wrong that they didn’t individually check with each person. There are some people who aren’t suitable for certain vaccinations,” Allardice said.

“No one at any point said to me ‘you’re in the wrong place’ or ‘you’re getting the wrong vaccination’. It came across as if the systems that should be in place weren’t in place.”

David Allardice was given a Sinovac dose, rather than the BioNTech one he wanted.

The Civil Service Bureau – which runs the city’s Covid-19 vaccination drive – admitted reception staff at Kowloon Bay Sports Centre failed as required to screen Allardice and his companion, who is over 70 years old, allowing them to enter the wrong vaccination centre.

“Although the vaccine was only administered with the [vaccinated person’s] consent to the health care staff at the information zone and the vaccination booth, we sincerely apologise for the mishap,” the spokesman said.

But Allardice responded by saying the consent he was said to have given was not informed because he was not told he would receive the Sinovac vaccine.

After receiving the injection he was given a “CoronaVac Covid-19 vaccine” certificate, which refers to the brand name of the Sinovac product. But Allardice said that did not ring any alarm bells because the vaccines tended to be identified by their manufacturers.

The bureau said it would remind reception staff to check bookings for the recipient’s choice of vaccine, date and location to avoid similar cases in the future. Booking confirmations and appointment reminders have also been revised to include both the vaccine name and its manufacturer for easy identification.

Asked if the bureau had received other reports of the wrong vaccine being administered, the spokesman declined to comment further.

Allardice admitted he was partly responsible for the bungle, but said vaccination centre staff should bear responsibility for everything that happened once he was inside the venue.

“I went to the wrong place, but there, at that point, the responsibility then falls exclusively on the vaccination centre,” he said, adding he had lodged a formal complaint with the bureau. 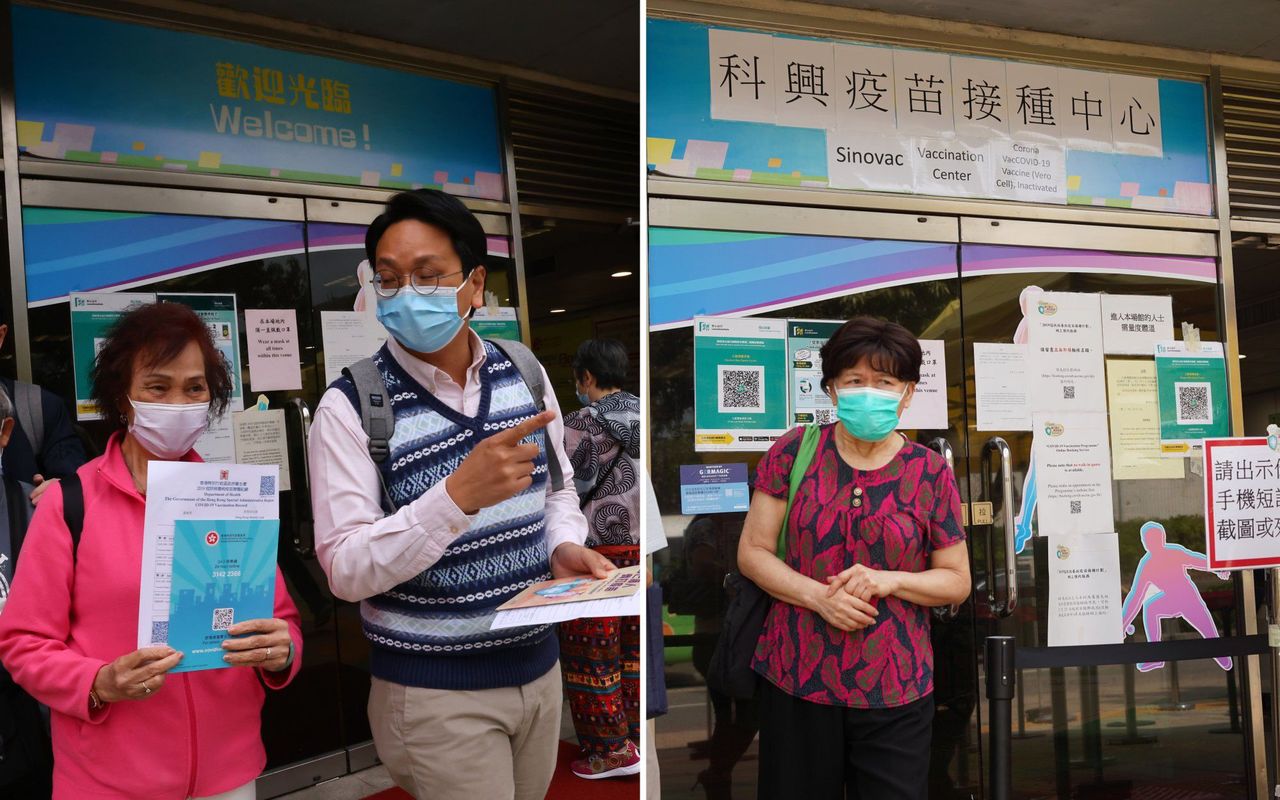 The Kowloon Bay Sports Centre with the welcome sign at the entrance on March 26 (left) and the new sign on Wednesday.

Residents aged 60 or above and specific groups, such as health care workers and care home staff, were initially prioritised for the jabs. Those aged at least 70 have the option of bringing up to two people with them to be inoculated at the same time, allowing Allardice to be vaccinated alongside the older person he shared the booking with.

The programme, which was launched in late February, was later expanded to cover all residents aged 30 and above. Domestic helpers and students aged 16 or older who are studying overseas are also eligible.

Allardice said he had spoken at length with his doctor about which vaccine to take and chose the BioNTech shot – which goes by the brand name Comirnaty – because it had a higher efficacy rate than Sinovac’s CoronaVac jab.

“When you’re doing chemotherapy, the efficacy is going to be reduced. It will also be reduced as a result of leukaemia. So with a double reduction of what is already quite a low efficacy [for CoronaVac], I’m not going to be left with a large amount of coverage, which is my concern. It removes the confidence of going out that I’d hoped I would be getting,” he said.

Allardice said his doctor was shocked to learn of the vaccination bungle.

“His jaw sort of dropped at the table,” he said, adding the physician advised him not to proceed for the second Sinovac shot and just start over with the BioNTech vaccine.

But Allardice said he had not yet made up his mind. A native of Scotland, he was hoping to return to his homeland when travel resumed, and would take the second Sinovac shot if holding the fully vaccinated status enabled him to travel.

The government recommends the public receive both doses of the same vaccine. In Hong Kong, only the BioNTech and Sinovac shots – both of which require two doses – are currently available.

Phase-three studies of the BioNTech vaccine found two doses of the shot to be 95 per cent effective against Covid-19, compared with a placebo.

The most recent data from Sinovac showed an overall efficacy rate of 50.66 per cent among the 18-60 age group, which would rise to 62.3 per cent after a second dose was given four weeks later.

The medical services provider said a jab recipient would normally need to present the text message showing the booking to administrative staff upon arrival at a vaccination centre, for the purposes of identity verification.

They would also be asked to watch a video about the vaccination and sign a consent form before getting the shot.

“For individual cases who claim they did not know which vaccination they were going to receive even after several rounds of checking, we think it is difficult for us to give a comment,” the company told the Post.

Alex Lam Chi-yau, chairman of Hong Kong Patients’ Voices, said the failure to check a person’s vaccination booking before proceeding with the injection was “unacceptable”.

“A vaccination centre has the ultimate responsibility to perform the gatekeeping duty – to check whether the person has a booking, which vaccine they intend to receive … and whether there should be pre-screening to make sure vaccine recipients have informed consent,” Lam said.

“This incident showed that a vaccination centre wasn’t performing its gatekeeping function … or [they] made mistakes when carrying out this duty.”

A check by the Post on Wednesday, a day after it inquired about Allardice’s case, found a new sign had been placed on the front door of the Kowloon Bay Sports Centre specifying it administered Sinovac jabs. The sign covered the welcome message that was seen earlier.