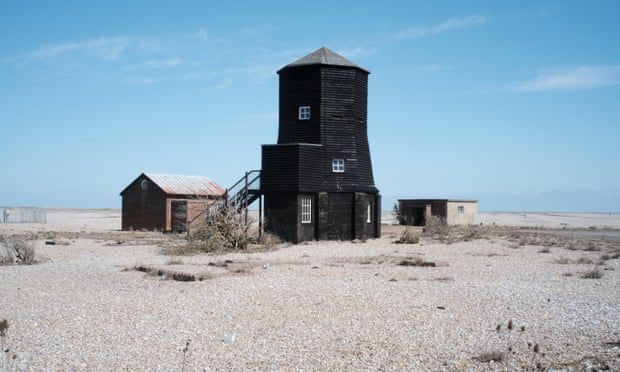 Home is where the art is: Suffolk’s creatives throw open their doors

Most people head to Suffolk for the beaches and the fish and chips. Maybe a bit of crabbing or birdspotting if they feel energetic. This autumn there’s a surprising attraction: a cornucopia of contemporary art.

Orford Ness is a nature reserve best known for its unique wildlife and military history. But it’s currently also host to Afterness, an exhibition by the groundbreaking organisation ArtAngel, which includes poetry by Ilya Kaminsky and an installation by composer and sound artist Chris Watson. Over in the market town of Melton, award-winning conceptual artist Ryan Gander hosts a group show, Flatwork, in his own studio – a converted radio factory next to a tractor showroom – which features sound artist Cory Arcangel and Simeon Barclay among others. 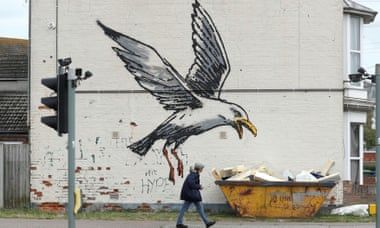 A gull eats ‘chips’ of insulation material from a skip in one of Banksy’s four Spraycation works in Lowestoft, Suffolk.

This embarrassment of artistic riches is not the result of a new grant – there are no Arts Council-funded visual arts organisations in Suffolk – or a commercial gallery. Nor are they created for an exclusive rural enclave, such as in Bruton in Somerset. While the county is home – or second home – to wealthy people, they mainly keep to towns such as Southwold and Aldeburgh. One of Banksy’s artworks is on Lowestoft’s London Road North. The town’s London Road South and Marine Parade area is the 25th most deprived area in England.

Gander and Lucas both live and work in Suffolk, having left London 13 and 20 years ago respectively. They are not the only ones. Jerwood Prize winner Maggi Hambling, Turner prize nominee Darren Almond, artists Kate Boxer, Abigail Lane and Glenn Brown also call Suffolk home. Artists moving out of London is nothing new, but it seems that those who headed for East Anglia have brought something special with them. 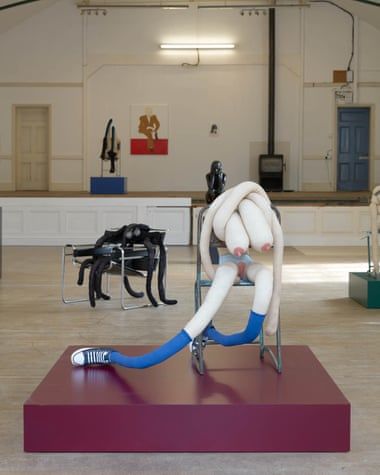 “There’s a dissident energy to many of the artists I know there,” says James Lingwood, co-director of ArtAngel. “They make their own scene. Perhaps this cluster of shows comes from that energy, as well as the fact we’ve all lived intensely local lives for the past 18 months.”

Lucas says she had been planning a show with Boxer before Covid struck and as time passed they decided to just make it local. “In the past, we used to put shows on whenever we could put our hands on a space – a help-yourself mentality. This show made me feel nostalgic for that.”

She says it does feel as if “something’s kicking off in Suffolk. When big galleries started opening spaces in the countryside, it seemed weird at first, but I think now we see there can be real substance in this.”

Gander also plans to stage another art show after the success of Flatwork. He thinks the surprise shouldn’t be the remote location of these exhibitions, but that there aren’t more like them. “There should be an art centre in every town in Britain, which perhaps could be achieved if funds were distributed with a more national spread,” he says.

“Look at the Kunsthalle systems in Germany and Switzerland and the FRAC system in France. Britain is pretty behind in delivering art to the nation. In that kind of situation, people who see a real need for art attempt to deliver it themselves.” 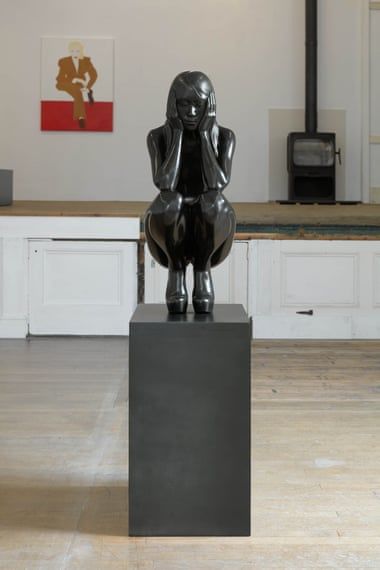 Hume, one of the artists in Pop Goes The Pastoral says being stuck at home has helped this cluster of shows in other ways too. “Normally if someone asks me to be in a show, I don’t have work as I’ll be booked to do so many exhibitions. For this, I could say, yeah, pop down to the studio and take your pick – I’ve got stuff I’ve been making for the last year. There’s been no competition as nowhere has been open for shows.”

Art can bring economic as well as cultural benefits. Banksy’s work has given the Great Yarmouth and East Suffolk area a boost as locals wait to find out if they’re made the shortlist for the next City of Culture 2025, an award that’s made a significant difference to previous winners such as Hull and Coventry. This is the first time a collection of linked or neighbouring towns have been eligible to apply together.

Whatever happens long-term with the Suffolk renaissance, visitors in coming weeks are in for a treat. Hume says he used to want visitors to react with “universal love” to his work, but he has given up on that.

“Art is a completely selfish activity, but there’s a generosity to it. You’re trying to enliven things, so I hope people coming to Suffolk see that.”