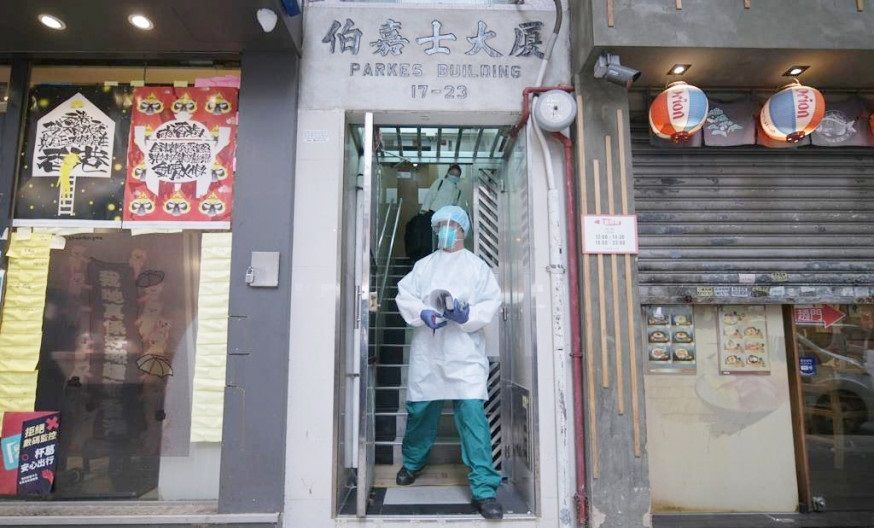 Hong Kong has confirmed the first Covid-19 infection with a mutant strain in the community, as health officials logged 18 new cases today.

Eight of the fresh cases were locally transmitted while the other 10 were imported.

The 29-year-old asymptomatic man, a carrier of the N501Y strain, was among the six untraceable local infections detected today.

Dr. Chuang Shuk-kwan of the Centre for Health Protection said the patient had landed in Hong Kong from Dubai in mid-March and have been living with a female friend in Parkes Building in Jordan since April 8, after completing a 21-day quarantine at a hotel in Tsim Sha Tsui.

The man was screened again on Thursday as he had planned to return Dubai the next day, but tested positive for the virus with a low CT value at 15 to 17.

Chuang said the man had been to various premises during his incubation period, including an Indian restaurant in Chong King Mansions and two banks on Nathan Road, where staffers have been ordered to take virus tests.

He also took the MTR and ferry to Cheung Chau and dined at a seafood eatery there on April 4.

Workers and travelers who had been to the Ramada Hong Kong in Tsim Sha Tsui, where the man had stayed in isolation, were also subjected to mandatory screening.

Authorities are still trying to identify the source of his infections, it remained unclear whether he caught the virus at the airport or in the community.

“He either had already got the infection in Dubai coupled with a long incubation period and those tests in the hotel couldn’t detect his infection. The other possibility is that he acquired the infection after arrival in Hong Kong, either in the flight, in the airport, in the hotel… these are all the possibilities that we have to examine,” Chuang said in a daily press briefing.

“And the third possibility is that after quarantine he went to the community, so he might get the infection from the community.”

Four of the remaining untraceable cases live in Tuen Mun, including an instructor, a cook, a taxi driver and a student.

Among the new imported cases today, four were also found to be carrying the N501Y strain, bringing the city’s number of cases involving mutant variants to 221. Ninety-three were from Britain, 27 were from South Africa and the other 17 were from unknown sources.

Health authorities have ramped up the toughest measure in efforts to keep the variant strain at bay, by sending 81 residents of 17-23 Parkes Street to quarantine centers for 21 days in an overnight lockdown at the building.

“The CHP decided to carry out prudent measures on infection control and prevention to arrange compulsory quarantine for asymptomatic residents of all units on all floors of Parkes Building, so as to stop the potential risk of spread of N501Y mutant strain,” a government spokesman said in a statement.

The city is also seeing around 20 preliminary-positive cases pending confirmation, most of which were imported.
#covid 19  #covid
Add Comment