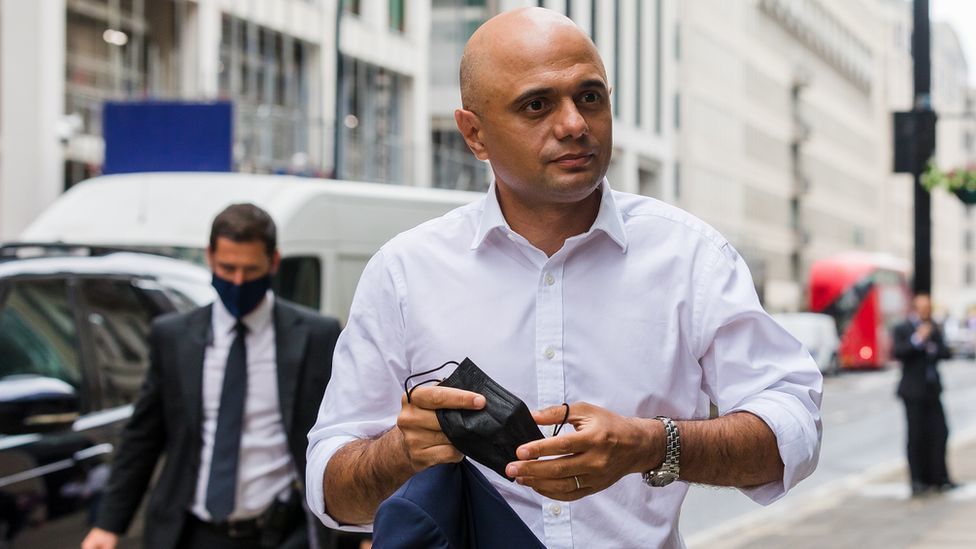 Mr Javid, who has received both vaccine doses, said on Saturday night a PCR test had confirmed a positive result he received by lateral flow test.

He said he would continue to self-isolate and work from home.

It is understood Mr Javid met Boris Johnson on Friday. It is not clear yet whether the prime minister will have to isolate.

It comes as the UK recorded more than 50,000 daily cases for the second day running, days before almost all legal restrictions on social contact are lifted in England on Monday.

The last time cases exceeded 50,000 was in mid-January.

In a video posted earlier on his Twitter feed, Mr Javid said he took the lateral flow test after feeling a "a bit groggy" on Friday evening.

He said: "I'm grateful that I've had two jabs of the vaccine and so far my symptoms are very mild."

Mr Javid later tweeted that the positive result was confirmed by a PCR test, which is checked in a laboratory.

He urged people who had not been vaccinated yet to "get out there and get them as soon as you can".

Mr Javid also said people who feel groggy or come into contact with someone who is positive should take a lateral flow test. 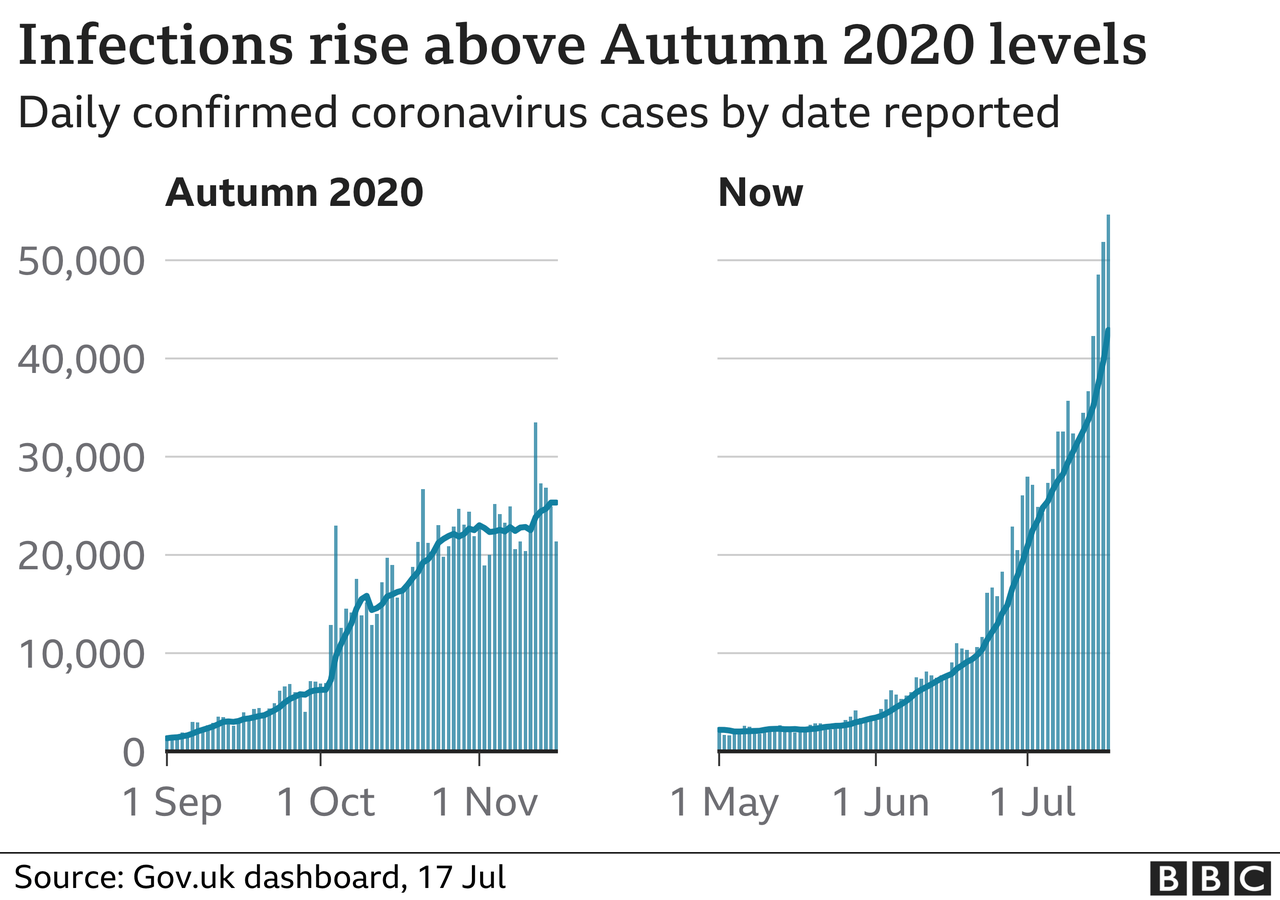 Mr Javid replaced Matt Hancock as health secretary less than three weeks ago after CCTV footage emerged showing his predecessor kissing a colleague in his office, in breach of social-distancing rules.

Mr Javid previously tweeted that he had received the Oxford-AstraZeneca vaccine.

A Public Health England study found two doses of the AstraZeneca vaccine was 60% effective at stopping symptomatic disease from the Delta variant, which is now dominant across the UK. Two jabs of the Pfizer vaccine was 88% effective.

A separate analysis from PHE found the vaccines were highly effective against preventing hospitalisations from the same variant, with two doses of the Pfizer jab 96% effective and the AstraZeneca jab 92%.

England's deputy chief medical officer, Prof Jonathan Van-Tam, said vaccines were not 100% effective but were likely to have saved about 30,000 lives in the UK.

Lateral flow tests provide a quick result, using a device similar to a pregnancy test and are intended for use in those without symptoms, according to the NHS. PCR tests are mainly used when people have coronavirus symptoms or have already had a positive lateral flow result, and are sent to laboratories to be checked. The NHS suggests people do a lateral flow test twice a week to check if they have the virus. 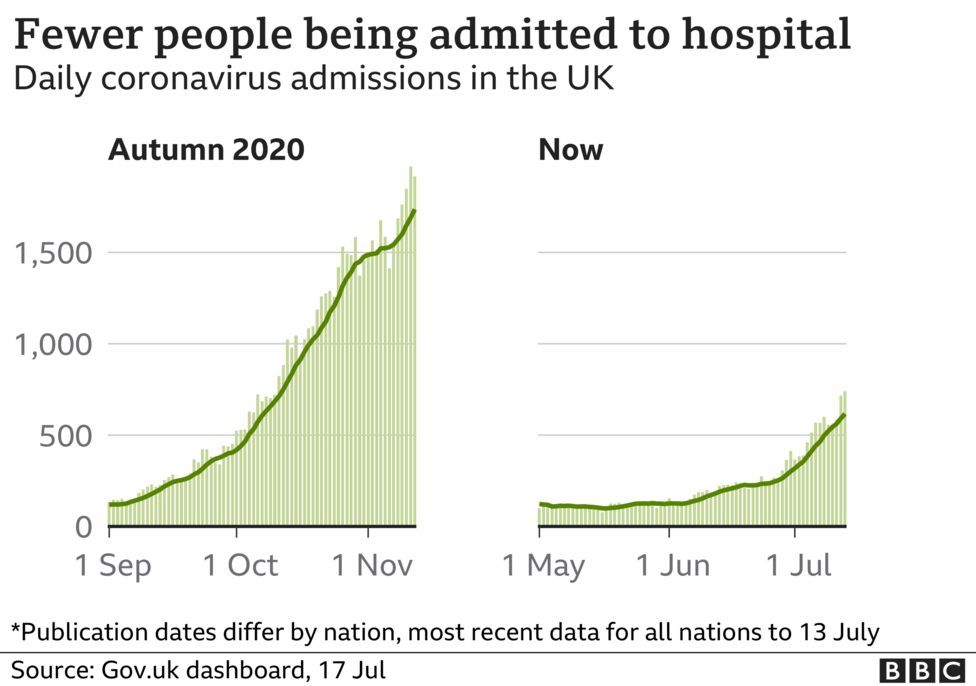 The health secretary's announcement comes as the government prepares to go ahead with the final lifting of lockdown restrictions in England on Monday.

Social-distancing rules will end, although government guidelines advise face coverings should still be worn in enclosed spaces such as in shops and on public transport.

Jeremy Hunt, the chairman of the Commons health select committee, warned there was a danger that England may have to go back into lockdown in the autumn if hospitalisation rates continued to increase during the summer.

"The warning light on the NHS dashboard is not flashing amber, it is flashing red," he told the BBC Radio 4 Today programme.

One scientist advising the government said the country could be facing a "protracted period" of rising cases running into the autumn.

Prof John Edmunds, of the London School of Hygiene and Tropical Medicine and a member of the Scientific Advisory Group for Emergencies (Sage), said new infections could reach 100,000 a day within weeks.

Prof Van-Tam warned the pandemic would carry on for a while and "there will be further twists and turns".

He added: "This is going to be a bumpy winter at times but, providing people don't tear the pants out of it and they go in a cautious, steady, gradual way, one hopes we'll be OK."