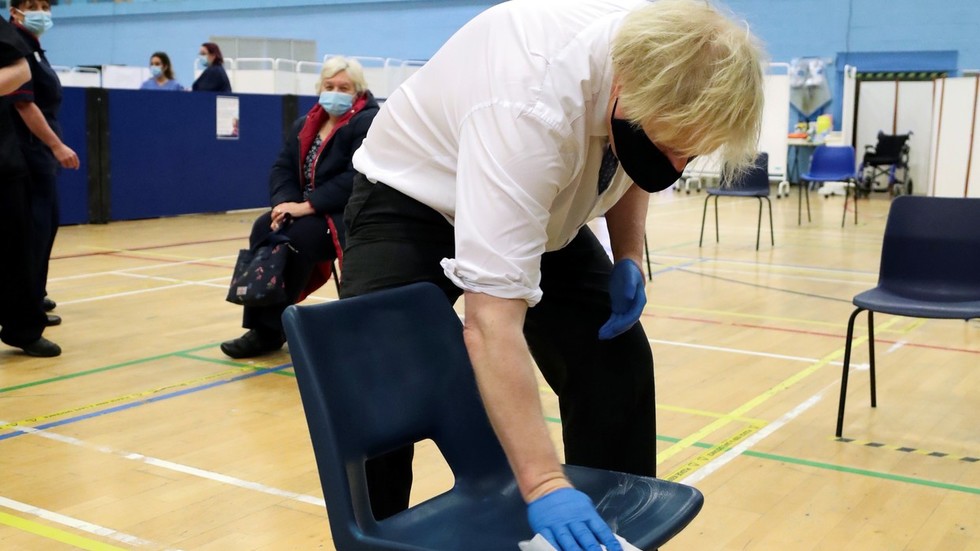 Got away with murder? Boris Johnson jokes at Covid vaccine centre as he tries to put on tight gloves ‘like O.J. SIMPSON’

UK Prime Minister Boris Johnson turned a photo op into an insensitive gaffe as he called his struggles in putting on a pair of tight rubber gloves at a Covid-19 vaccination centre in South Wales “like O.J. Simpson."

The quip harkened back to Simpson's double-murder trial in 1995. The former NFL star, who has huge hands, struggled to pull on a pair of bloody gloves that prosecutors alleged he wore while murdering his ex-wife, Nicole Brown Simpson, and her friend, Ron Goldman. Asking Simpson to put on the gloves during cross-examination backfired for prosecutors, as defense lawyer Johnnie Cochran famously argued, “If it doesn't fit, you must acquit,” in helping to win acquittal for his client.

As recently as 2017, 71 percent of Americans in a CBS News poll still believed Simpson was guilty. A civil jury unanimously found him liable for the two deaths in 1997, awarding $8.5 million to Goldman's family.

It was little surprise, therefore, that referencing the controversial moment that helped acquit a man of a grisly double-murder didn't go over well, especially in the context of a virus that has killed more than 118,000 people in the UK. It didn't help, either, that the man making the comment is the leader of the nation with the world's highest Covid-19 per capita death rate.

“Do you feel like O.J. Simpson because you've both got away with murder?” one Twitter user asked Johnson. Other offended observers were similarly harsh. As one said, “I agree that Boris Johnson should have never likened himself to O.J. Simpson. O.J. killed only two people, didn't he?”

Do you feel like O. J. Simpson, @BorisJohnson because you've both got away with murder? https://t.co/hL1EmqXoAr

Even Johnson's presence in South Wales amid a Covid-19 lockdown was controversial. The PM said he made the trip because it was important for him to see firsthand how the vaccination rollout is being managed. Welsh Mental Health and Wellbeing Minister Eluned Morgan told reporters that “as many people as possible should stay home” amid the pandemic.