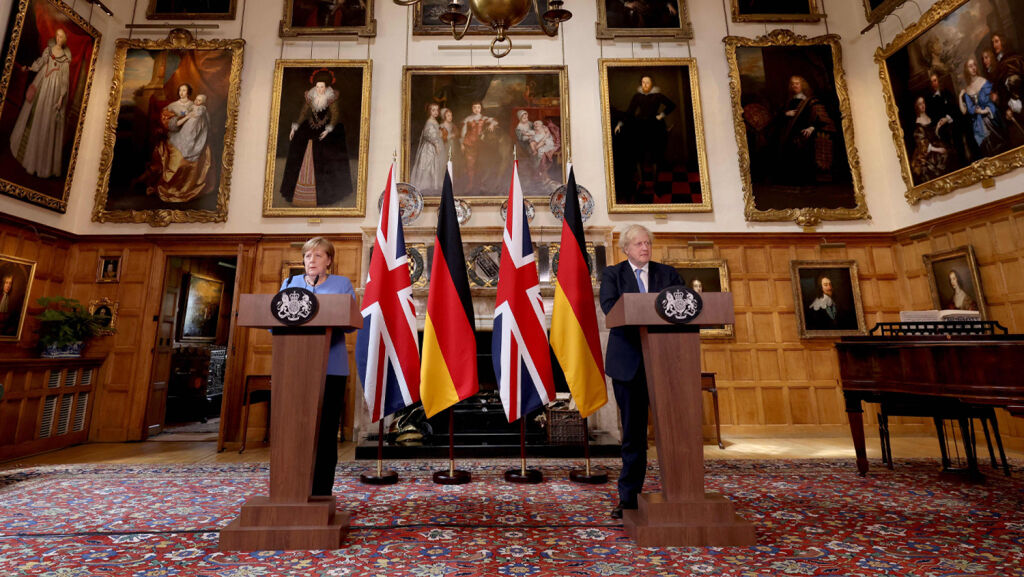 Germany and Britain Agree to Cooperate on Defense and Foreign Policy

Even after Brexit, Britain seeks to appease Germany.

The United Kingdom and Germany agreed to a 20-point post-Brexit joint declaration of cooperation on June 20. The two countries promised to cooperate on defense and work together to secure Germany a seat on the United Nations Security Council. Although British Prime Minister Boris Johnson worked to lead Britain out of the European Union, it now appears he is working to bind the country closer to Germany.

After German Chancellor Angela Merkel’s July 2 visit to Britain, Johnson noted that Merkel has “revitalized” the German-British friendship. The renewed commitment to the “strategic unity of Europe” between Britain and Germany “reflects Germany’s strong desire to maintain close relations with the UK despite its disappointment at Brexit,” the Guardian wrote. It also “shows that the UK does not wish to cut itself off from its main European partners on defense and foreign policy.”

Foreign policy and defense matters are of great urgency for Britain. Just before the declaration was signed, a British warship was accused of illegally entering Russian territory. Moscow threatened to bomb the British vessel in the Black Sea near the Crimean Peninsula. While Britain has disputed Russia’s report on the matter, Russian President Vladimir Putin boasted that Russia could have sunk a British warship without starting World War iii. Whatever the case may be, it is clear that Britain has no will to challenge Russia’s takeover of Crimea.

But German-British cooperation will likely not protect Britain from being bullied by Russia. To the contrary, the signed agreement advocates reviving dialogue with Putin. It is in Germany’s best interests to avoid a confrontation with Russia at any cost, and Britain is willing to play along. The agreement reads: “We are committed to conducting constructive dialogue with Russia through appropriate channels in order to make clear our expectations and to discuss our ideas for concrete solutions.”

“nato is the cornerstone of Euro-Atlantic security,” the declaration states regarding defense policies. “It remains the bedrock of our collective defense. We recognize the importance of a stronger and more capable European contribution to this. We remain jointly committed to nato-EU cooperation.”

Britain once opposed any advances by the EU that would lead to an independent, German-dominated, European army. This opposition has faded significantly over the years and Germany increasingly forms an independent European pillar in nato.

Britain is now also supporting Germany’s quest to become a permanent member of the United Nations Security Council. The Foreign Office stated that it would support Germany’s application. “British support for a long-standing German demand hardly requires the UK to expend great diplomatic capital but is seen as important in Berlin,” the Guardian noted.

Germany’s diplomatic leverage is growing rapidly and almost all of its demands are being granted. With each concession, it is becoming more and more difficult to tell Germany no.

“America, Britain and the Jewish nation of Israel almost grovel before Germany today,” Trumpet editor in chief Gerald Flurry writes in Nahum—An End-Time Prophecy for Germany. “Britain tried that approach before World War ii with Hitler. That approach will bring about our destruction!”

The current development in Germany’s relationship with Britain is remarkable if you consider Bible prophecy.

Late educator Herbert W. Armstrong repeatedly warned of the dangers of Britain aligning too closely with Europe. In July 1962, he said that Bible prophecy reveals “the frightful consequences sure to follow” that dangerous cooperation.

In 1961, he wrote that the European Common Market—a precursor to the EU—was “a Europe of united but sovereign nations.” He added, “On this basis, with each nation retaining its own sovereignty, Britain is seeking admission. But, later, it will develop into an actual revival of the ‘Holy Roman Empire’—with one central ruler, and 10 others placing all their military power in his hands. And prophecy says this giant new power will destroy American cities and conquer this great nation!”

He warned in 1980 that “Britain will not be in the ‘Holy Roman Empire.’ But Britain will be destroyed by it, along with the United States!”

In his book The United States and Britain in Prophecy, Mr. Armstrong explained that Britain and America are among the primary descendants of ancient Israel. Britain descended from Ephraim and the U.S. from Manasseh.

The Prophet Hosea warned of a time when Britain will have already left the EU: “When Ephraim saw his sickness, and Judah saw his wound, then went Ephraim to the Assyrian, and sent to king Jareb: yet could he not heal you, nor cure you of your wound” (Hosea 5:13). This prophecy makes no mention of Manasseh, or the U.S. Instead, as Mr. Flurry explains in Hosea—Reaping the Whirlwind, it refers only to Britain and the Jewish nation in the Middle East. Both of which will turn to Germany, or modern-day Assyria. The various stages of this prophecy are being fulfilled before our eyes.

Mr. Flurry notes in his booklet on Nahum:

When Germany is militarily strong, dealing with that nation is like dealing with a cluster of thorns. “For while they be folden together as thorns, and while they are drunken as drunkards, they shall be devoured as stubble fully dry” (Nahum 1:10). Their foreign policy is sharp and piercing. They are very difficult to reason with. Often they rip and tear by cunning, crafty and devious affairs with other nations.

Germany is rising to diplomatic and military power again. Great Britain is getting smaller and smaller; a nation that was once filled with boldness and courage is now groveling before its adversaries. What we are seeing is the result of a nation forsaking God. In Nahum—An End-Time Prophecy for Germany, Mr. Flurry shows where this disastrous decision will lead. He also explains in detail how God uses Germany to punish His people and how He will soon lead all mankind to repentance. Request your free copy for more information.
#angela merkel  #boris johnson
Add Comment