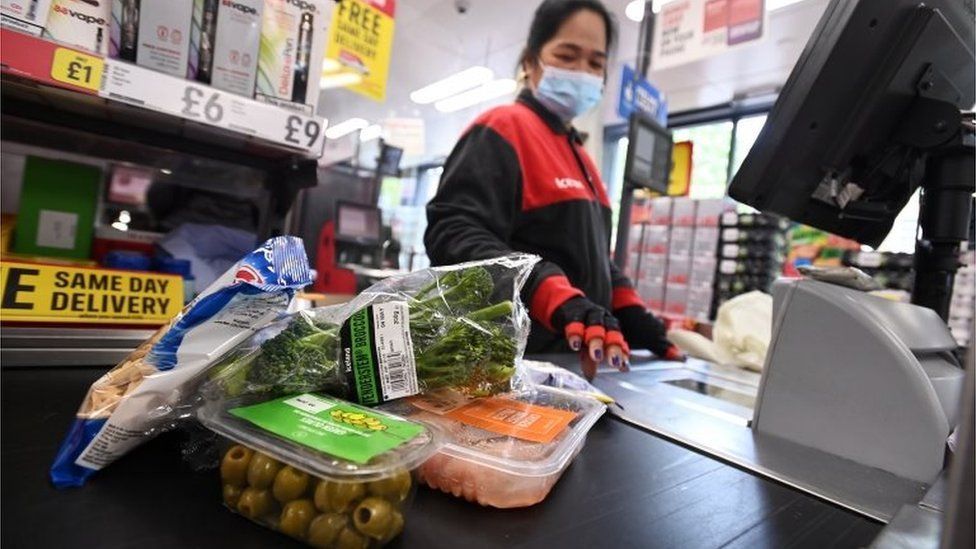 Environment Secretary George Eustice has been criticised as "out of touch" and "patronising" for advising those struggling with the rising cost of living to buy cheaper food items.

It comes on the last day of local election campaigns, where concerns over rising prices have featured heavily.

In recent months, UK inflation has risen to 7% - the highest in 30 years.

The Bank of England has warned inflation could rise further, potentially hitting double figures in October.

Asked about the squeeze on people's finances, Mr Eustice told the BBC the government had put in place a "package of measures" including a rebate on energy costs.

"We've got to take a proportionate approach to try to help people through that difficult time. We can't go too far, we can't mitigate all of the impacts otherwise we will fuel even greater inflation."

Later, he told Sky News that due to a "competitive market" the UK had the lowest household food expenditure in Europe.

He said people who chose value brands could "actually contain and manage their household budget".

"The response by the Conservatives to the cost-of-living crisis has been nothing short of insulting. They are out of touch and out of ideas."

Asked if he agreed with his minister's comments, Prime Minister Boris Johnson said the government wanted to "help people in any way we can through the aftershocks of Covid".

He said "immediate" support was available, through a rebate package and cold weather payments.

"Rather than bringing forward meaningful financial measures to help support families and to put money into people's pockets, the Tory government is instead sitting on its hands and resorting to treating people with contempt.

And the Liberal Democrat's Wendy Chamberlain said: " Families and pensioners who can't afford their weekly shop need more help, not patronising advice from a clueless minister."

Boris Johnson says the government wants to help people "in any way we can through the aftershocks of Covid".
#boris johnson  #johnson  #covid
Add Comment