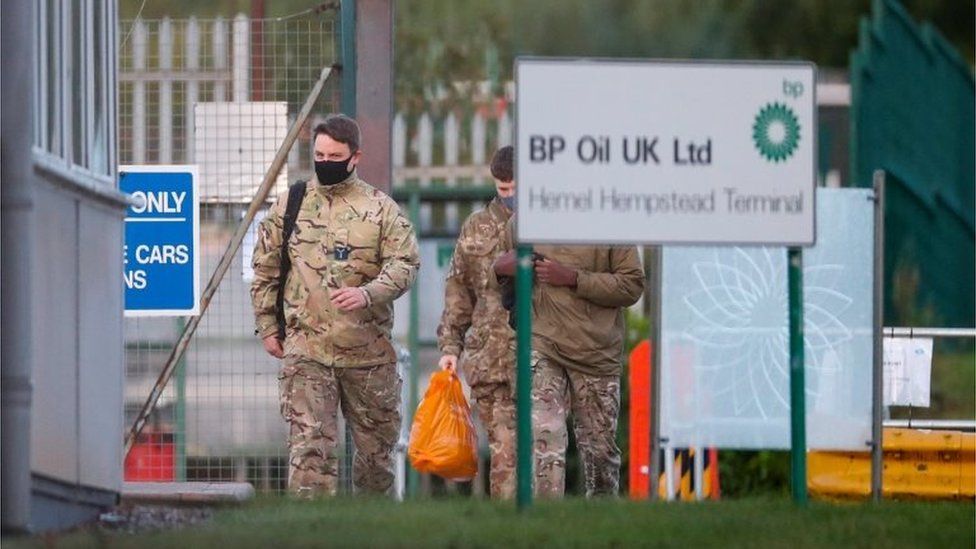 One in five forecourts in London and the South East of England are still without fuel, the body that represents independent fuel sellers has said.

The Petrol Retailers Association (PRA) said there had been a "marked improvement" across the rest of the UK thanks to "steady deliveries".

But conditions in the South East are "still challenging", the PRA said.

The improvement in supplies has led to forecourt firm EG Group to remove its £30 cap on buying fuel at its sites.

It said purchases were returning to normal levels in the majority of places, apart from the south of England.

However, the company, which has about 400 sites in the UK, added it expected supply issues to ease "in the coming days" due to the military driving tankers to restore supplies.

About 200 servicemen and women from the Army and RAF have been drafted in to deliver fuel from depots to forecourts.

The PRA said the situation around London and the South East was "still challenging". In these areas, it said 62% of the sites surveyed had both grades of fuel available, 18% had only one grade and 20% were dry.

In the rest of the country, the trade body said 86% of sites had both grades of fuel "thanks to steady deliveries and stabilising demand", with 6% having only one grade and 8% being dry.

"We are grateful for the support lent by the government through their provision of military drivers, although further action must be taken to address the needs of disproportionately affected areas," said Gordon Balmer, executive director of the PRA.

The PRA represents the interests of the independent filling stations across the UK, which account for nearly 5,500 of the UK's 8,380 forecourts.

The government has been criticised for not deploying the military earlier after panic-buying led to chaos and queues on some petrol station forecourts.

More than 65 drivers will start work, with plans to increase this to 200 personnel to be deployed in total, including 100 drivers.

The drivers have undertaken refresher training with the fuel delivery firm, Hoyer in order to take on the work.

A government spokesperson said there were signs of improvement in average forecourt stocks across the UK, adding that demand was "continuing to stabilise".

"More than half of those who have completed training to make fuel deliveries are being deployed to terminals serving London and the South-East of England, demonstrating that the sector is allocating drivers to areas most affected in this first phase from Monday," the spokesperson said.

*  23 September: BP temporarily closes some petrol stations due to a shortage of lorry drivers

*  25 September: After days of long queues at stations, with many running dry, the government announces a temporary visa scheme, allowing 5,000 lorry drivers to work in the UK in the run-up to Christmas

*  27 September: The Army is put on standby to help deliver fuel to stations hit by shortages

*  28 September: Prime Minister Boris Johnson says the situation at forecourts is "stabilising", while the PRA says there are "early signs" pressure is starting to ease at pumps

*  4 October: Army starts to deliver fuel to speed up replenishments

The crisis began more than 10 days ago when BP said it had run out of petrol in a number of its outlets. That prompted motorists to fill up more than usual, leaving deliveries unable to keep up with demand.

Many sectors of the UK economy, including food firms and petrol retailers, have been affected by a chronic shortage of lorry drivers, which the haulage industry has blamed on factors including Covid, Brexit, an aging workforce, and tax changes.

David Charman, who runs Parkfoot Garage in West Malling in Kent, told the BBC's Today programme there was a big task ahead to restore supplies.

"This is not panic-buying anymore, this is people that have waited as long as they possibly can and now they have no fuel. We're having to push cars that are in the queue to get to our site because they've run out of fuel," he said.

"We didn't have the normal two days of stock underground... because of Covid but we were still managing the situation perfectly well. But now, when we're all empty, it needs a huge influx of fuel deliveries to everybody, not just to me, to ensure that we can get through this."