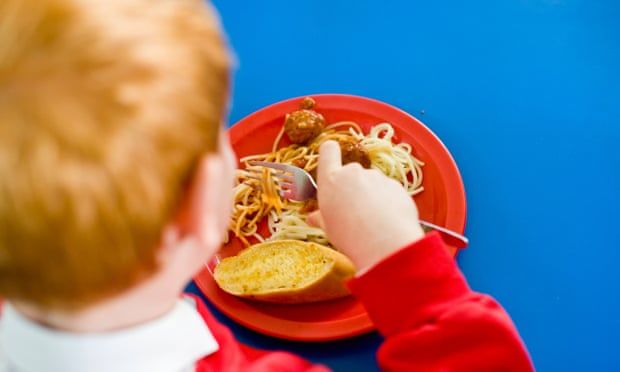 Number of pupils qualifying surges during Covid crisis, with highest rates in north-east of England

Nearly 200,000 more children were registered for free school meals in England as the early economic fallout from the pandemic hit household incomes, figures published by the government show.

In the 10 months between January and October last year, the proportion of children on free school meals in England shot up from 17% to nearly 20%, meaning that 1.63 million out of 8.2 million state school pupils are now in receipt of free lunches. In January 2020 the total was 1.44 million.

The highest rates were in the north-east, where more than 26% were eligible, and 23% in the West Midlands. In contrast, only 15% of pupils in the south-east of England were eligible.

While 37% of all pupils in Knowsley, Merseyside were on free school meals, Wokingham in leafy Berkshire had just 8% of pupils on FSM, and a fraction under 10% of pupils in Windsor and Maidenhead were registered.

More than 300,000 pupils now able to have free school meals became eligible after 23 March 2020, when the first national lockdown was announced. The total number is expected to increase when the results for the January 2021 school census are published.

Children in state-funded schools are entitled to free school meals if the parent or carer they live with is on benefits, including income support, or receiving universal credit with household income of less than £7,400 a year.

Campaigners believe the figures do not reflect the scale of food insecurity, and there are hundreds of thousands of children in families who struggle to afford to put food on the table who are not eligible for free school meals. The Food Foundation thinktank estimates 2.3 million children experienced food insecurity over the past six months.

Labour said the rise in eligibility for school meals showed how devastating the pandemic had been for family budgets.

Tulip Siddiq, shadow minister for children and early years, said: “Four in five schools were using the national free school meal voucher scheme at the start of the month. Yet ministers are scrapping this in favour of a scheme that will provide food support for just four days over Easter and create a postcode lottery in provision.

“The government should be guaranteeing free school meals support to all who need it including through cash payments, rather than allowing children to go hungry over another school holiday.

The footballer Marcus Rashford wrote to the government in January calling for a review of school meals policy, and urging eligibility rules to be changed to allow 1.5 million extra children whose parents are on universal credit to get free school dinners, in line with the recommendations of Henry Dimbleby’s national food strategy.

Stephanie Slater of the charity School Food Matters, which ran a Breakfast Box food aid programme in south London throughout the pandemic, said: “One in four of the families we have supported are not eligible for free schools meals so we wholeheartedly support the recommendations from the national food strategy to expand entitlement to free school meals.”

A Department for Education spokesperson said: “It was always likely that more pupils would become eligible for free school meals during the pandemic. That’s why we have ensured that throughout this period, schools have continued to accept applications for free school meals, providing meals to anyone who becomes newly eligible, including while pupils were learning remotely.

“We have also committed to extending the breakfast clubs programme for disadvantaged pupils over the next two years. Outside term-time, we have expanded our holiday activities and food programme to every local authority across the country this year, and the Covid winter grant scheme has also been extended over Easter, to further support vulnerable families.”

Kevin Courtney, joint general secretary of the National Education Union, said: “Boris Johnson has persistently failed to deliver for the young people in poverty whose families need real support and action. The experience of the last year has shown just how vital this is to children’s education. Today’s figures are truly shocking and confirm the experience of NEU members.”
#covid  #boris johnson
Add Comment