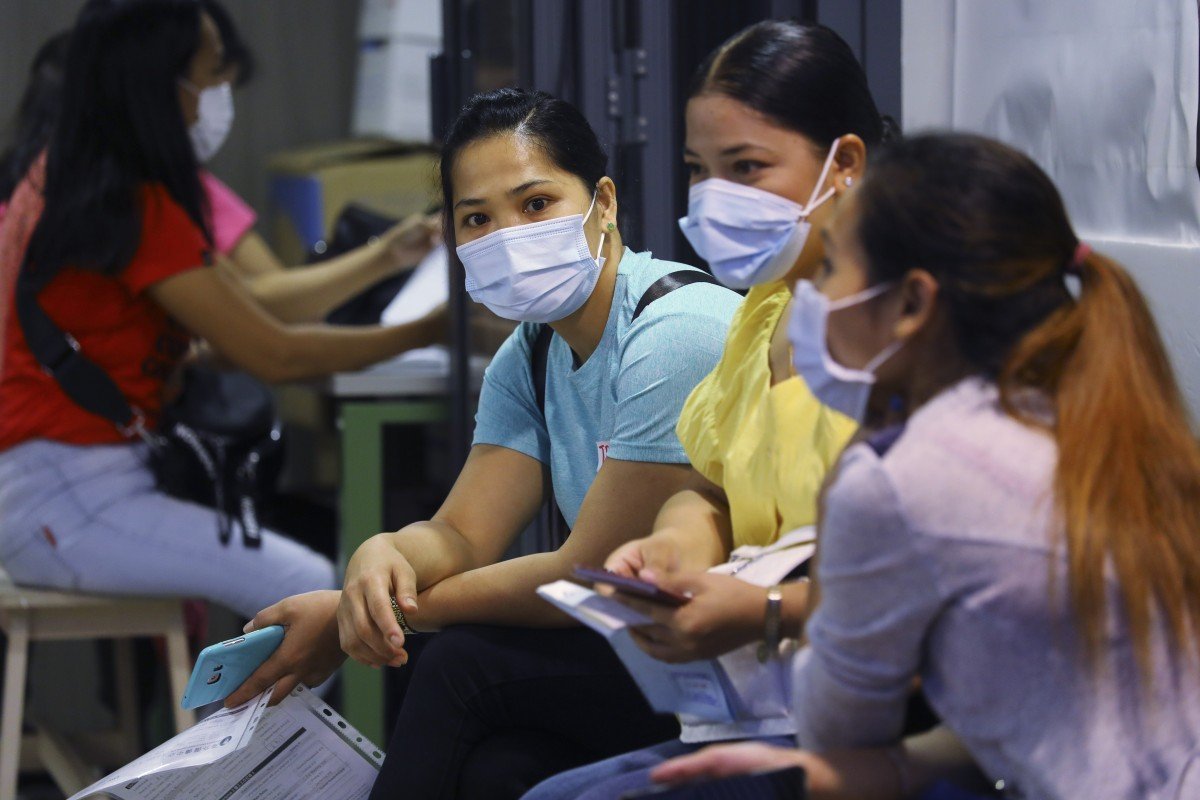 The woman, who recently died of ovarian cancer, had claimed that her employer did not provide her with sufficient support. Advocates say the case highlights the plight of migrant workers who often face pressure from their employers to not seek medical help over fears about Covid-19.

The death of Merle Bonagua, a domestic worker from the Philippines who had worked for 18 years in Hong Kong, has highlighted the often daunting hurdles migrant workers face in getting health care in the city since the beginning of the coronavirus crisis, advocates and other domestic workers say.

Bonagua, 52, died of ovarian cancer on September 20 at Queen Elizabeth Hospital in Yau Ma Tei. She was laid to rest this past week in her home country.

Paul Saret, the head of the Philippine consulate’s assistance to nationals section in Hong Kong, said the consulate only came to know about Bonagua’s case in late August through Pieter Nootenboom, founder of the migrant online group Hong Kong Overseas Foreign Workers, or HKOFW, who had helped take her to hospital.

Saret said that before her death, Bonagua had drafted a document stating that her employer – an unnamed family – had not provided her with sufficient support. “She left an affidavit saying the employer did not tend to her needs, meaning that she requested to go to the hospital, but they failed to do so,” Saret told This Week in Asia.

He said the Philippine consulate had blacklisted the employer, meaning they will no longer be able to hire another Filipino domestic worker, although they would be free to hire a domestic helper from another country.

There are about 380,000 foreign domestic workers in Hong Kong, most of whom hail from the Philippines and Indonesia, according to official statistics.

This Week in Asia was not able to contact Bonagua’s employer. Saret said the employer had told the consulate that they were apprehensive about letting her go to a hospital because of the Covid-19 situation in Hong Kong, but that they had not prevented her from getting medical care. Bonagua reportedly saw a private doctor before being eventually admitted to a public hospital.

Saret added that the employer had paid Bonaqua’s medical expenses and most of the costs related to sending her body back to the Philippines.

Domestic workers have reported increased workloads, stress levels and isolation since the beginning of the pandemic. Some say they have been prevented from leaving their employers’ houses on their days off, while also facing pressure from their employers not to keep their doctors’ appointments because of the fear of Covid-19 transmission.

“We have had a number of cases where workers were refused permission to leave the house to seek medical treatment or whose employers refused to pay medical treatment. Some involved life-threatening situations,” said Manisha Wijesinghe, director of case management at the non-profit group HELP. “It’s disappointing to see that something as basic as medical treatment could be refused.”

Wijesinghe said that every such case is shocking, but that Bonagua’s situation was particularly “egregious” because “there were times where she was in distress … and that it went on for so long until it was undeniable.”

Cynthia Abdon-Tellez, general manager of the Mission for Migrant Workers, said that the number of queries received by her support group has gone up this year, having reached over 450 by July. She noted that hurdles in accessing medical care during the pandemic had been among the issues raised by the workers who sought help.

“I receive calls from workers who say that when they complain about a health issue, the employers end up questioning them as if they were making it up,” she said. “Some think that the worker is trying to find an excuse just to go out.”

“We cannot blame the employers for getting worried, but there are different ways of handling the situation,” she added.

Eman Villanueva, a domestic worker and spokesman for the Asian Migrants Coordinating Body, said that employers seemed to be particularly concerned about their employees going to public hospitals, and sometimes advised them to get over-the-counter medicines instead.

“Things have gotten to an extreme now,” he said. “Employers need to understand that by not allowing the workers to attend medical appointments they are putting the workers’ health at risk.”

Some migrant workers have also avoided sharing any health-related complaints for fear of being fired from their jobs. Villanueva said there was a recent case of a domestic worker who was dismissed after initially testing positive for the coronavirus.

Once they are sacked, foreign domestic workers lose the right to public medical care in the city.

Last year, the case of Baby Jane Allas, a Filipino domestic worker who was fired after being diagnosed with cervical cancer, also sparked public outrage. Allas, who received treatment at a private hospital in Hong Kong after an online fundraising campaign, has now fully recovered.

She won HK$30,000 in compensation from her employer in a case that reached the Labour Tribunal last year. But a final decision has yet to be made on a separate claim she filed with the Equal Opportunities Commission, in which she argued that it is illegal to discriminate against someone who has a disability. 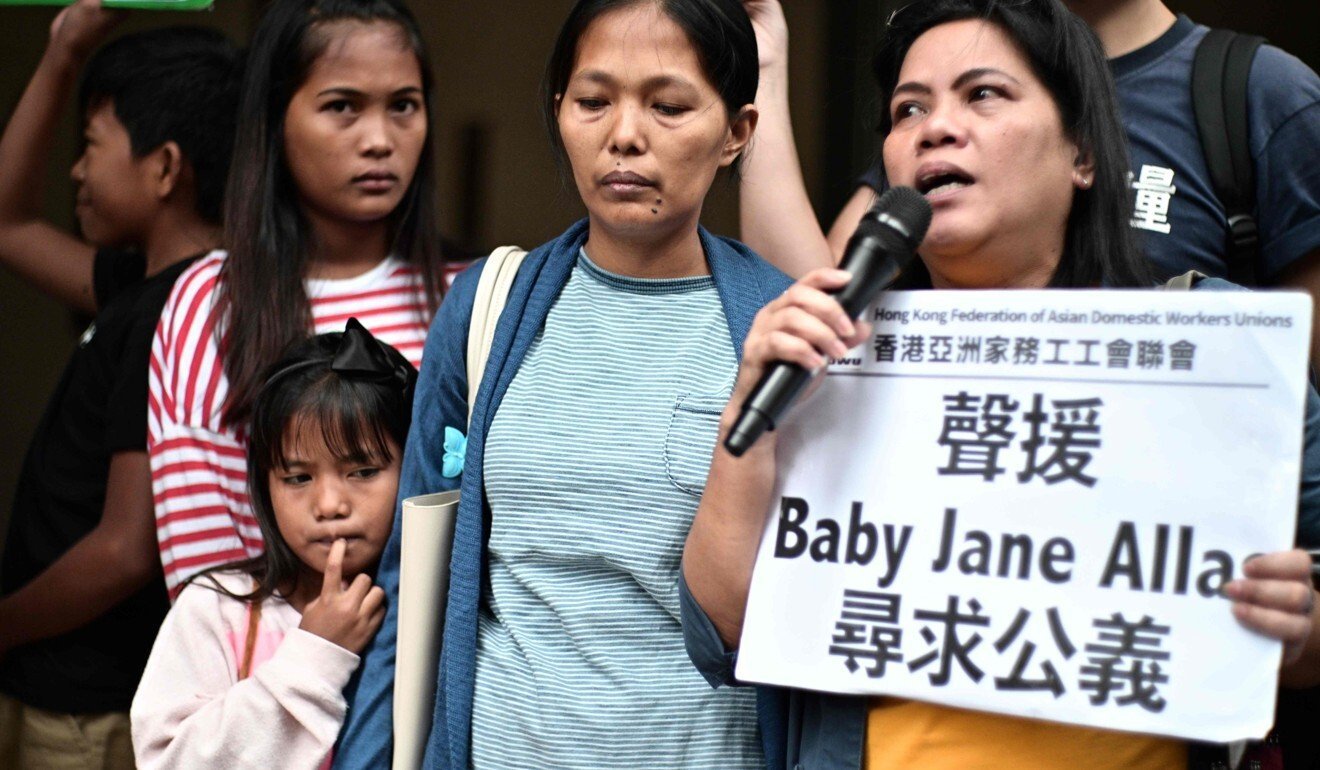 Baby Jane Allas, centre, who was sacked after she was diagnosed with cervical cancer, outside a hearing at the Labour Tribunal, which ordered her former employer to pay a settlement of HK$30,000 in damages.

Advocates say that no tangible measures have been introduced in Hong Kong to further support migrant workers since Allas’s case came to light, and that the situation has only been made worse by the current pandemic.

“Unlike others, they can’t leave work at the end of the day and seek treatment,” Wijesinghe said, referring to the rule that forces foreign domestic workers to live at their employers’ homes.

“During Covid-19, we had a client who had to attend a medical appointment on her day off. The employer asked her not to leave the house on her rest day and this led to her contract being terminated,” Wijesinghe said.

Wijesinghe said that cases like this and Bonagua’s are “a testament of how the system contributes to the vulnerability of the domestic workers”.

“The existing laws and policies make them very dependent on the employer,” she said. “If they have a good employer, great. Otherwise, they will be vulnerable to situations like these.”

Saret said that the Philippines consulate in Hong Kong has recorded on average about six deaths of Filipino domestic workers a month, mostly due to heart attacks, strokes and cancer.

Abdon-Tellez said cancer cases among domestic workers had become common in recent years. “We don’t have a year without a cancer case. Some have passed away because they did not get immediate attention. Some had kind employers who understood the situation. And others decided to go home,” she said.

Wijesinghe suggested that the government offer a streamlined and subsidised medical care programme – even if just for a short period of time – for those who are fired and need to receive treatment.