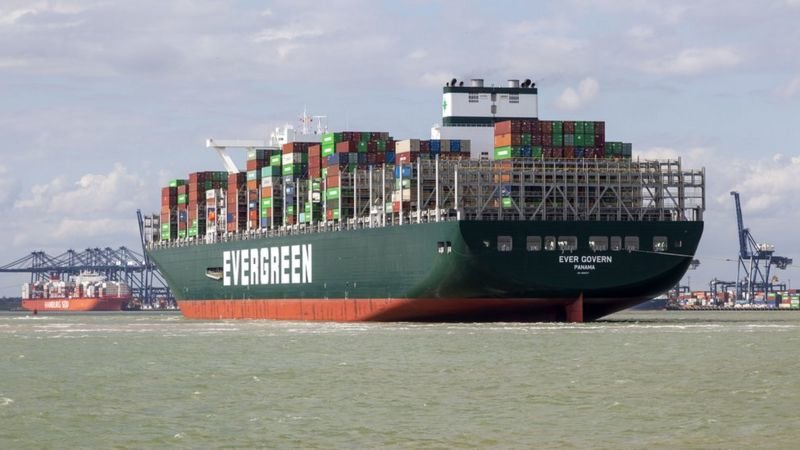 Felixstowe Port in 'chaos' as Christmas and Brexit loom

Retailers, shipping and haulage companies have complained of "chaos" at Felixstowe Port in Suffolk, affecting goods in the run-up to Christmas.

One ship due to be unloaded at the port last week was redirected to Rotterdam because of "unacceptable" delays.

The owner, Hutchison Ports, blames pre-Brexit stockpiling and the pandemic.

Freight manager Matt Hudson warned that "if the chaos continues, increased shipping prices will be passed on to consumers".

Mr Hudson, whose company distributes goods picked up at the port, said containers were being left on the quayside because haulage companies could not book a slot to enter the site.

"It's delaying freight going into shops for consumers to buy," he said. "Shops are struggling anyway at the moment because of the impact from the coronavirus.

"If retail outlets can't sell what is actually en-route at the moment in time for Christmas, potentially they could lose even more money than they have done already this year."

Part of the problem is a shipment of 11,000 containers of PPE ordered by the government that is clogging up the port.

Hutchison Ports UK is also accused of furloughing staff unnecessarily. It has been asked for a response to these allegations.

Last week, Taiwanese shipping firm Evergreen directed one of its ships to bypass Felixstowe because of "serious port congestion".

The ship's cargo was unloaded in Rotterdam instead and ferried back to the UK via London's Thamesport.

An Evergreen spokesman said the firm had been told by Felixstowe's owner that a berthing slot - where cargo is unloaded - would not be available for up to 10 days after the ship's scheduled arrival.

"Such a delay is totally unacceptable," he said. 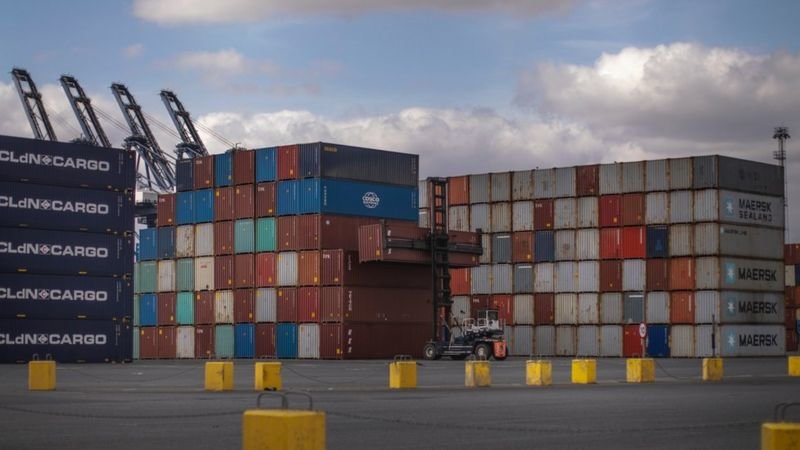 In a statement, Hutchison Ports UK said: "The imbalance in UK trade and Brexit stockpiling exacerbate current operational challenges and we are working with our customers and stakeholders to get through the current congestion.

"Performance at the port remains under pressure due to the Covid pandemic, high levels of import traffic, the large number of empty containers and a large amount of unusually long-stay containers held at the port."

But in an operational note posted on its website, the company said delays at Felixstowe would continue "at least into December and possibly through into the New Year" - potentially causing havoc for firms still waiting on pre-Christmas stock.

In a sign of the company's woes, Hutchison Ports UK recently reinstalled its former boss Chris Lewis as chief executive. He came out of retirement to take up the role for a second time, having last led the firm in 2010. 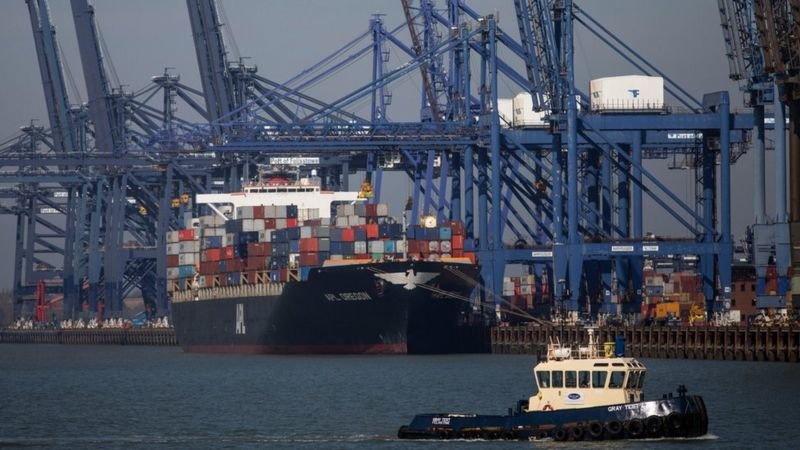 For months, hauliers have complained about Felixstowe's Vehicle Booking System (VBS) which lorry drivers must use to gain ticketed entry to the port. Freight manager Mr Hudson says in recent weeks, the situation has become worse.

"There are more containers waiting on the port while all trucking companies are logging on trying to get a slot. Sometimes the port cancels some of the VBS [slots] when drivers are actually on port waiting," he said.

"We need to see improvement quickly. It's ruining a lot of people's businesses."

A spokesman for Hutchison Ports UK disputed the claims about the VBS, pointing out that in recent days, empty slots have been available and that improvements to the system are under way.

'Our stock of scooters is stuck on ships' 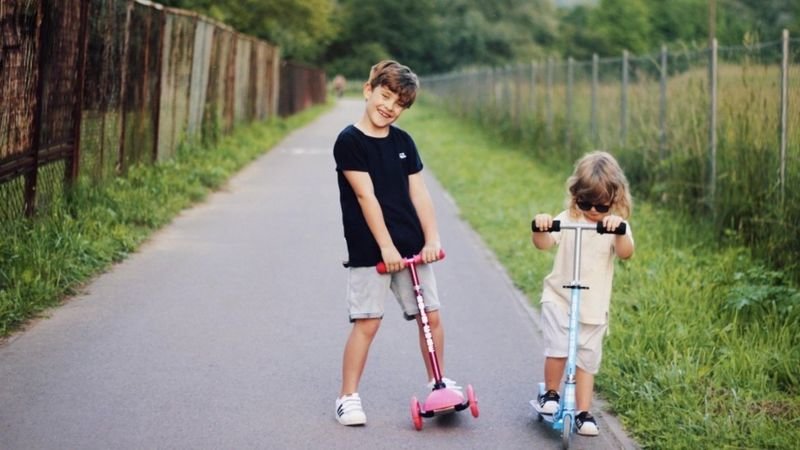 She currently has five containers of stock on ships that are waiting to dock at Felixstowe.

She says it's incredibly frustrating because one of the ships has been waiting to unload its cargo for three weeks and she's turning away potential customers who want to buy Christmas presents for their kids.

"Effectively we are out of stock of our best-selling products and we've not been able to run the promotions we'd like to run because we're not going to be able to meet the demand in the lead up to Christmas," she said.

"We've done everything we needed to do, we ordered in plenty of time - but we can't access the stock because it can't get into the port."

She said she keeps getting messages from the shipping companies telling her 'Sorry, it's going to be another week's delay'.

Logistics UK, the trade association representing supply chain firms, said there had been a huge spike recently in the volume of cargo entering the UK.

Part of that dates back to the summer, when the UK's first lockdown eased and firms increased stock orders as the economy started to pick up. More recently, businesses have been looking ahead to 1 January and preparing for uncertainty at the end of the Brexit transition period.

"We are worried about the situation but we understand the port are working on solutions now," said Logistics UK policy manager Zoe McLernon.

"With the end of the transition period coming, we've got to make sure that our ports can take the goods we need." 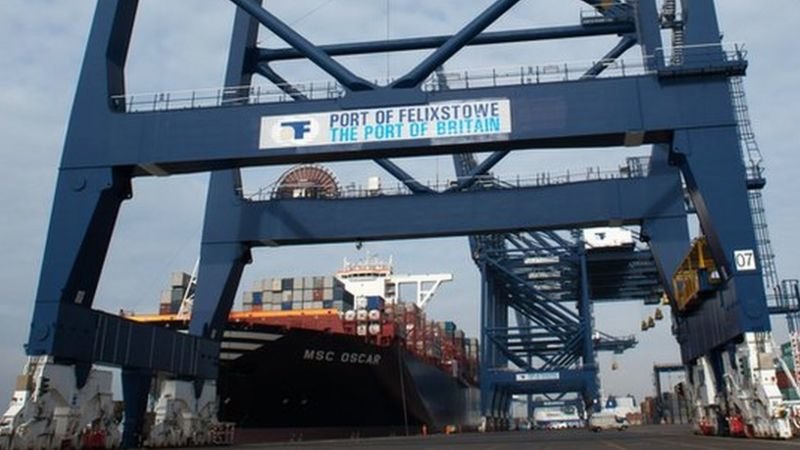 Two months ago, the former Transport Secretary Chris Grayling was hired to advise the port's parent company Hutchison Ports Europe, which is based in London. The register of MPs' financial interests shows he's being paid £100,000 for "around seven hours" of work per week.

The Department for Transport says it's aware of the issues at Felixstowe Port and, while it stressed this is a commercial matter for industry to resolve, it said it would continue to monitor the situation for any impact on wider supply chains.