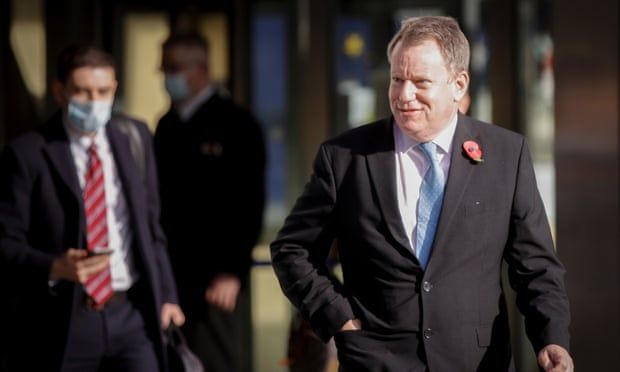 The EU’s Brexit commissioner will tell David Frost that negotiations over Northern Ireland are doomed to fail unless he drops an “unattainable” demand over the role of the European court of justice.

At a meeting in London on Friday, Maroš Šefčovič will warn the UK’s Brexit minister, Lord Frost, that Downing Street needs to “take a step” towards the EU for the talks to be “meaningful”.

There is growing concern in Brussels that Boris Johnson has already decided to trigger article 16 of the protocol on Northern Ireland in the coming weeks in order to suspend the post-Brexit arrangements and impose his own vision.

Brussels is preparing a “ladder” of retaliatory options, up to suspending the trade deal agreed last Christmas Eve, while seeking to convince the UK of the virtues of its approach.

“We think that the objectives set out by the UK are unattainable,” said a senior EU official. “The UK position is that the role of the EU’s institution needs to go … As long as that remains the UK position, I don’t see what we can do.”

The talks over the post-Brexit arrangements for Northern Ireland are in their fourth week. A protocol in the withdrawal agreement Johnson signed keeps Northern Ireland in the single market and draws a customs border down the Irish Sea in order to avoid a hard border on the island of Ireland.

In October, the EU offered to drastically reduce the number of checks on goods coming from Great Britain to Northern Ireland in recognition of the political and economic disruption being caused. But the UK is insisting that the protocol needs a more fundamental redrafting including the removal of the European court of justice from its role as arbiter of EU law.

Brussels has countered that Northern Ireland cannot maintain single market access without the ECJ remaining as the chief arbiter of EU law.

“The UK wants us to engage in intensive talks and we are happy to do so,” an EU official said before Friday’s meeting. “But then the UK must take a step towards us to ensure that the talks are meaningful. If the UK wants these discussions to succeed, then the major step that we took on 13 October needs to be reciprocated. On questions around governance and the court of justice we have always made clear that we think that the objectives set out by the UK are unattainable.”

Brussels believes the UK is being too dogmatic in its approach, raising concerns about the sincerity of the prime minister’s desire to find a solution.

EU officials point to attempts to answer concerns over the collection of VAT in Northern Ireland. Downing Street has complained that evolution in the EU law book that applies in Northern Ireland could put traders there at a disadvantage compared with those based in the rest of the UK.

An EU official said: “There is a specific provision in the protocol, which gives a role to the joint committee for finding solutions where the application of VAT principles under the protocol creates issues in Northern Ireland. It’s one of the sub-paragraphs of article eight.

“On that point, for example, we say why don’t we use the mechanisms specifically provided for in the protocol to see how far we can go. And yet the UK having never tried that calls for a radically different approach to VAT which would require a renegotiation of the protocol.”

France’s EU affairs minister, Clément Beaune, suggested Northern Ireland had been benefiting from its access to both the EU and single market, describing Brexit as “a failure” instead for the rest of the UK.

He said on Thursday: “Brexit is a failure, it’s clear … Brexit has an impact on the British economy more negative than Covid, it’s written black and white.

“We’ve seen the shortages taking place in Great Britain, the problems in Northern Ireland are better because they have access to the European market.”

Speaking in the House of Lords on Wednesday, Frost urged the EU to “keep calm”. “In my view, this process of negotiations has not reached its end,” he said. “Although we have been talking for nearly four weeks, there remain possibilities that the talks have not yet seriously examined, including many approaches that have been suggested by the UK.”

The Labour party called on Johnson to reach a deal with the EU over the Northern Ireland protocol and end the “poison of division” it says the government has provoked.

The shadow Northern Ireland secretary, Louise Haigh, said the Conservative party had been “reckless” in its approach to Northern Ireland, where a fragile peace has held for more than 20 years.

In a speech to the Senator George J Mitchell Institute for Peace in Belfast, she urged the prime minister not to provoke “further poisonous instability” in the weeks ahead.

Haigh said: “The Conservatives’ reckless custody of the Good Friday agreement has sown division and undermined stability. This is not a partisan point, nor one that gives me any satisfaction. Peace in Northern Ireland is too precious to be a plaything of partisan politics.

“The Labour party recognises and pays tribute to the work done by John Major, who helped lay the ground for the Good Friday agreement. But we cannot ignore the damage that has been done.”
#boris johnson  #johnson  #covid
Add Comment