Multi-partner relationships are on the rise, and finding their way into the mainstream. Could this new exposure change the way we look at sex and families?

Ian Jenkins, 45, faced death threats after coming out as gay while at university in Virginia. At that time, he could hardly foresee a day when he could live as an openly gay man with one partner, let alone two. But today, he shares a home in San Diego with his two partners, Alan, 43, and Jeremy, 37, (who are using their first names only for privacy), and their two children, ages three and one. All three men are the children’s legal fathers, their names on both birth certificates.

Jenkins and his first partner, Alan, both doctors, had discussed the possibility of a more open relationship for years, before meeting Jeremy in 2012. Though Jeremy, a zookeeper who works to save endangered species, wasn’t initially interested in polyamory, he got to know the couple as friends and “everyone sort of became comfortable with the idea – there was just good chemistry”, says Jenkins.

They became a family, but when they made the decision to have children, obstacles arose. Besides the fact that each man had to have his own attorney involved in both the surrogacy and egg donor contracts with their first child (separate women served as surrogate and donor), they then had to convince a judge that all three should be legally defined as the child’s parents.

Jenkins says the judge who heard their case “was understanding of the situation and wanted to help us”, but as a lower court judge “she wasn't allowed to set precedent”.

No men in three-way relationships had ever been granted joint parenting rights to a child before in California, or possibly anywhere in the US. But the men made their case, each explaining “why it was so important and necessary for us to have [our names on] the birth certificate”, says Jenkins. The judge ended up granting all three parenting rights to their first child, born in 2017, and Jenkins ended up writing a book about their journey, Three Dads and a Baby: Adventures in Modern Parenting, which was published on 9 March in the US. 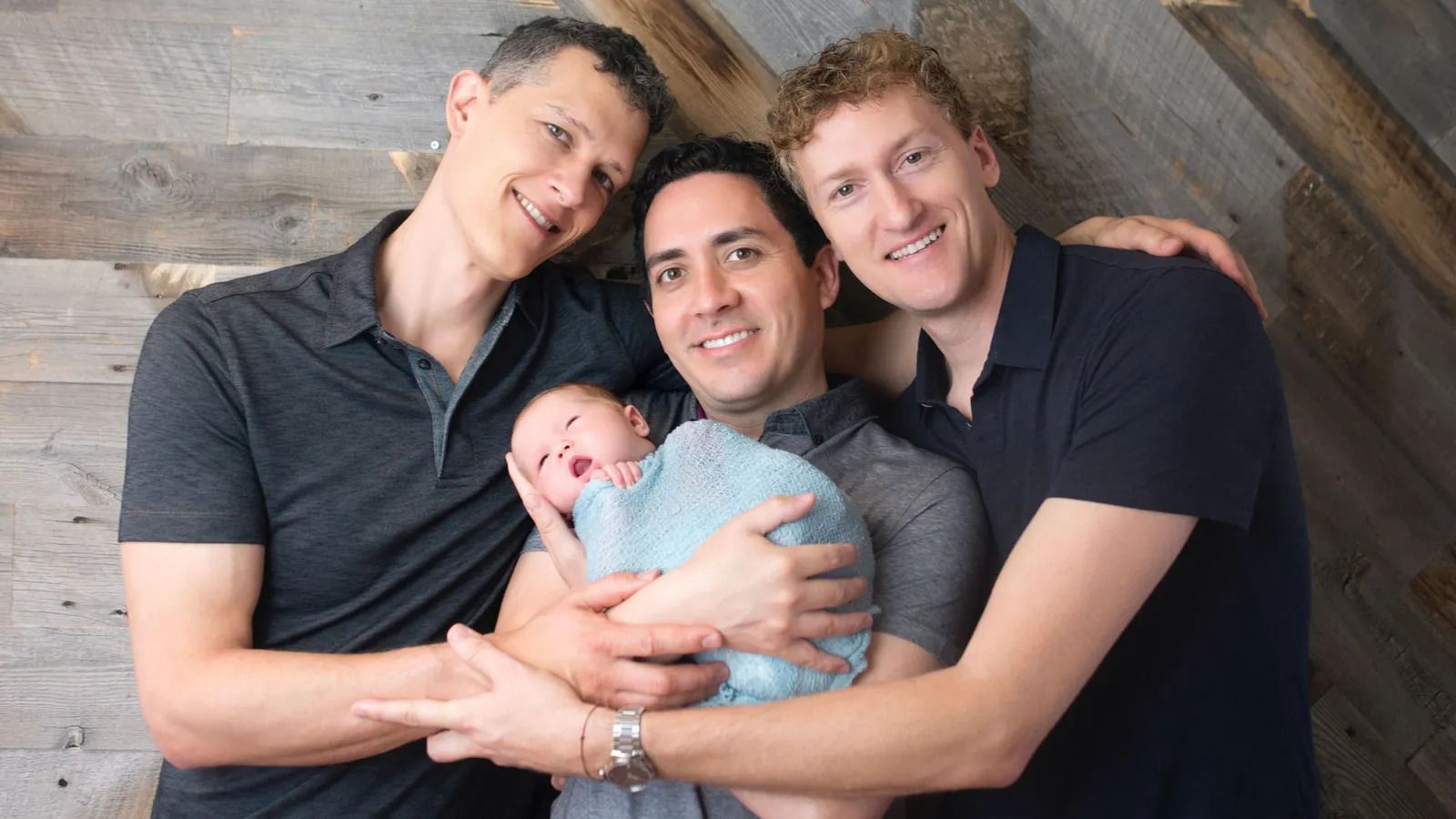 Ian Jenkins (left), along with partners Alan (centre) and Jeremy (right), of California, are all legal parents to their first child, born in 2017

Though it’s still rare for people in polyamorous relationships to share legal parentage of their children, various forms of ‘ethical non-monogamy’ – relationships involving more than two adults who consent to the arrangement – have becoming increasingly widespread over the past decade. Multiple factors contribute to this, from the rise of multi-partner dating apps and mainstream media representation to social media and more easily accessible networks for those interested in the lifestyle. “I think a huge factor is just people's willingness to be open,” says Jenkins. “There has to be visibility.”

These cultural shifts, however, date back to free love proponents in the 1960s, who worked hard to expand our sexual boundaries from groups working all across the globe. And changes continue to happen because of people like Jenkins and his partners, whose stories help shed long-held taboos about having multiple partners.

‘This is not a new thing’: the history of non-monogamy

In 2016, a survey of nearly 9,000 single US adults showed that one in five had previously been in a consensually non-monogamous relationship. A Canadian survey came up with roughly the same numbers a year later.

“Something else we've seen in the last decade is that Google searches for the terms ‘polyamory’ and ‘open relationships’ have increased, which demonstrates that there's more interest in this topic,” says Justin Lehmiller, social psychologist and research fellow at The Kinsey Institute for Research in Sex, Gender and Reproduction in Bloomington, Indiana.

But people have been engaging in these types of relationships “for a really long time”, adds Lehmiller. “This is not a new thing.”

Everyone sort of became comfortable with the idea: there was just good chemistry – Ian Jenkins

It was new in 1969, however, when Dossie Easton, co-author with Janet Hardy of the 1997 book The Ethical Slut, made the then “quite unusual” decision that she would “never be monogamous again” after having left a bad relationship. In 1973, she joined a group called San Francisco Sex Information (which still exists) and found herself in a community of people exploring open sexual lifestyles. “I got to be part of advancing that world,” she says.

Over the past several decades, Easton has travelled to “poly meet-ups” in the UK, Germany, the Netherlands and Australia. In Berlin, she met Claudia Zinser, 57, who started to “live openly polyamorous about 25 years ago”, says Zinser. She’s been counselling people in polyamorous relationships for about a decade, and has seen openness toward the lifestyle increase, particularly among urban young people. “The media, including social media, hyped the topic… so it’s not unknown or taboo anymore,” she says. “It’s maybe even hip.”

Lehmiller says the HIV epidemic of the 1980s and 90s caused research on consensual non-monogamy to slow down, as having sex with multiple partners had become viewed as less safe. “The rebirth of research in this area started around 2010 or so,” says Lehmiller. “In the last decade, we've really seen an explosion.” 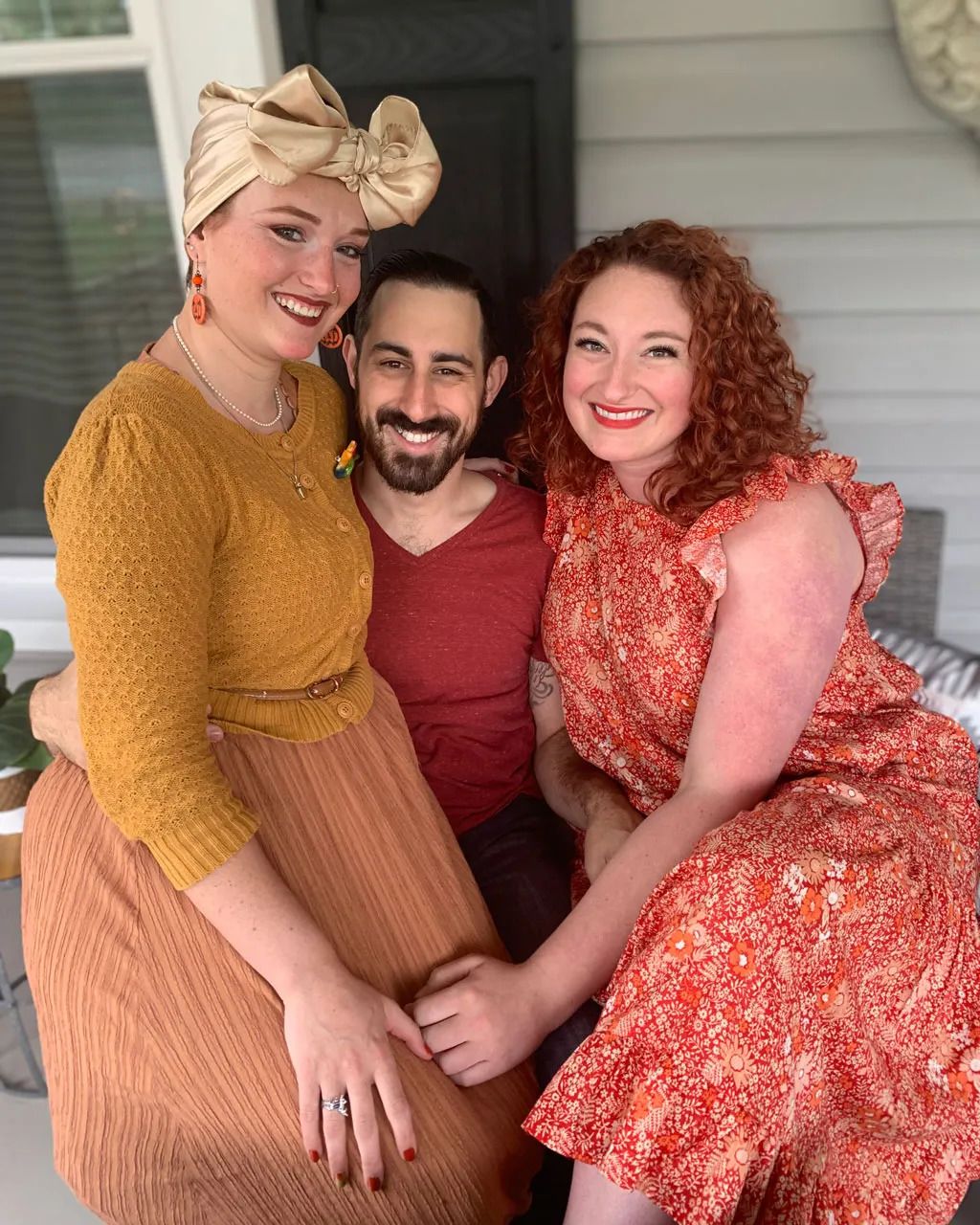 The current near-mainstreaming of ethical non-monogamy, he says, has happened because of both academic research that’s filtered into the public, through media and education centres, and more diverse depictions of these relationships on TV. These newer depictions go beyond HBO’s Big Love or TLC’s Sister Wives, which both follow Mormon families featuring one husband and multiple wives, to show a variety of poly relationships. Both Lucy Gillespie’s Unicornland, in which a newly single woman goes on dates with several different couples; and You Me Her, where both members of a couple fall for another woman together, are strong examples.

With these apps, “there are more options for meeting and connecting,” says Lehmiller, “so it's not as much of an underground scene as it was in the past”.

Feeld is how Janie Frank, 25, met her two partners, Maggie Odell, 27, and Cody Coppola, 31, in 2016. She’d first started using the app earlier that year because, though she’d previously only dated men, she realised she liked women, as well. “I was really nervous about dating a woman for the first time,” says Frank. “I decided the way I was going to get around this was to date couples instead to ease myself into it, so I would be dating a man and woman at the same time.”

Looking back, Frank finds this logic “strange and funny”, but it ultimately led to her dating several couples before meeting Odell and Coppola. It also introduced her to “this whole lifestyle that I didn’t know existed”, she says. “Talking to people on the app… I began to realise there is a whole community for people who are ethically non-monogamous.”

Today, Frank and Odell both have TikTok accounts, between which they have a few hundred-thousand followers. “We've been using them to try to talk about polyamory and bring awareness to it, and just normalise it and educate people on… what it can look like,” says Frank.

Some ethically non-monogamous people reach out to thank them for the representation. Others less familiar with the lifestyle comment to say they’re glad they learned about polyamory from Frank and Odell’s videos. “I had never heard about this before,” some say.

Is the law catching up?

The rise in ethically non-monogamous relationships is leading to legal recognition beyond Jenkins and his partners gaining parental rights to their children. In July 2020, the Somerville, Massachusetts city council voted unanimously to recognise polyamorous domestic partnerships. The city of Cambridge, which borders Somerville, recently followed suit. 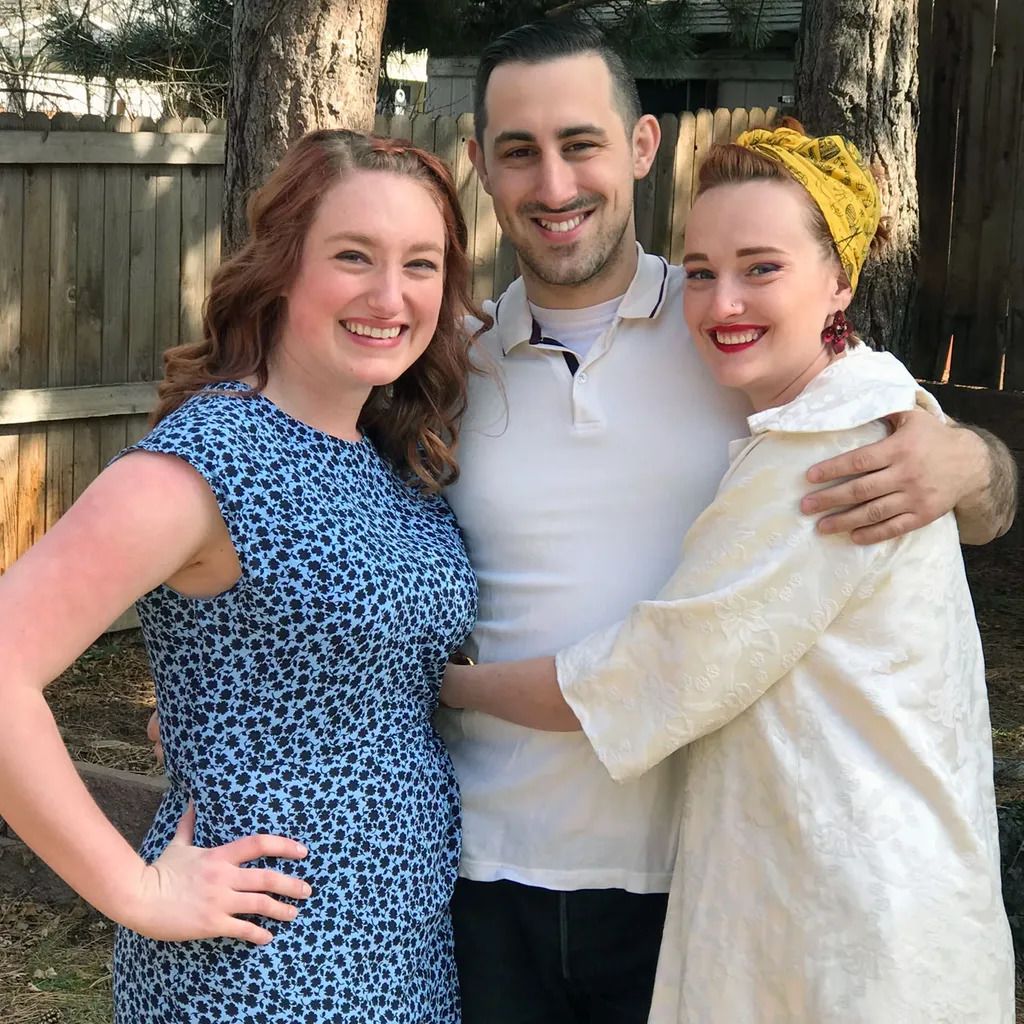 Frank says she was "really nervous" to date women at first, but decided "to date couples instead to ease myself into it"

This isn’t just happening in the US. In 2018, two men and a woman in a polyamorous relationship were all recognised as the legal parents of their child in Newfoundland, Canada. The year prior, three men in a relationship in Medellin, Colombia, were legally married.

These geographically disparate moves towards normalising ethical non-monogamy may help spark a more global movement. Zinser, in Berlin, believes the push to online meetings and communities, spurred by Covid-19, will enhance “global networks” for those who practice ethical non-monogamy. The spread of information about non-monogamy, meanwhile, “is going to give people more options for designing the type of relationship that’s right for them”, says Lehmiller.

In spite of these changes, people in non-monogamous and queer relationships still contend with stigma. Frank says she and her partners at one time received anonymous hate mail (it’s since stopped). And, as of a year ago, Jenkins says students at the college he attended still belted out a homophobic chant at football games.

In San Diego, however, Jenkins says he and his partners don’t face discrimination – it’s mainly why he and Alan chose to move there in the first place. After Jenkins’s book came out, his colleagues at the hospital where he works, including all the senior administrators, wrote to congratulate him. “They even suggested we could do a book signing in the future,” says Jenkins. “We’re really lucky to be in that environment.”