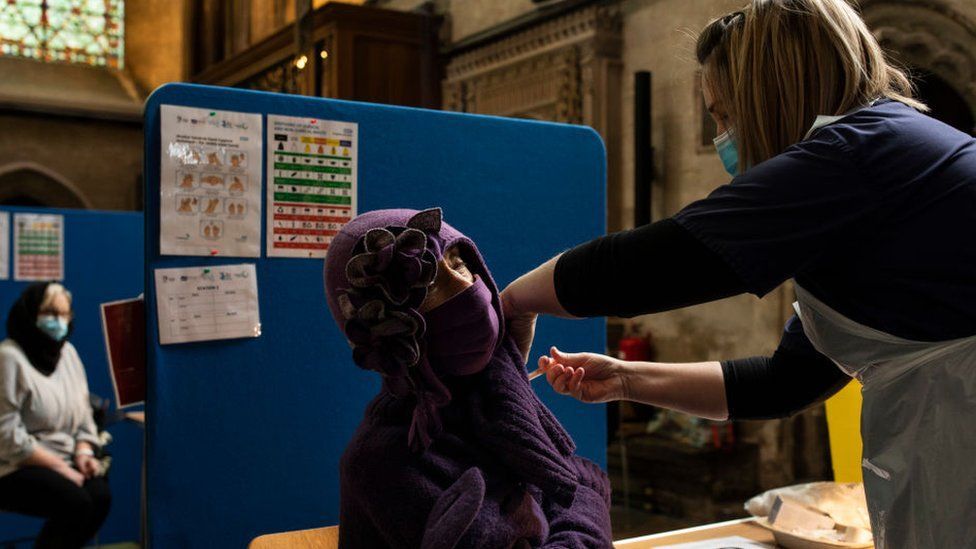 The NHS is "firmly on track" to offer everyone in the top four priority groups in England a Covid vaccine by Monday, says the head of NHS England.

Sir Simon Stevens said it had been "the fastest and largest vaccination campaign in history".

The UK government's aim is to reach 15 million of the most vulnerable by mid-February - and 14 million have been vaccinated so far.

Wales said on Friday it was the first UK nation to meet its target.

Speaking at the Coventry hospital where the first person in the UK to be vaccinated - 91-year-old Maggie Keenan - received her first dose, Sir Simon said it had been an "incredible achievement" by staff and volunteers.

"The uptake has been fantastic - we thought three-quarters would say yes to the vaccine but more than nine out of 10 have done so," he said.

Anyone aged over 70 in England who hasn't been vaccinated can go online or call 119 to book an appointment.

From next week, details of who will be vaccinated in the next phase of the programme involving the over 50s and people with underlying health conditions will be set out. They are due to be vaccinated by May.

Some regions of the UK have already begun inviting the over-60s, who are part of the next phase.

In the meantime, Sir Simon said it was important that people come forward for their second dose when invited because it "gives extra protection and immunity".

In the 10 weeks since vaccinations against coronavirus began in the UK, a first dose has been given to:

Included in the first four priority groups, which covers 88% of those most at risk of dying from Covid-19, are people aged 70 and over, frontline health and social care workers, care homes residents and those at very high risk of severe illness from coronavirus. 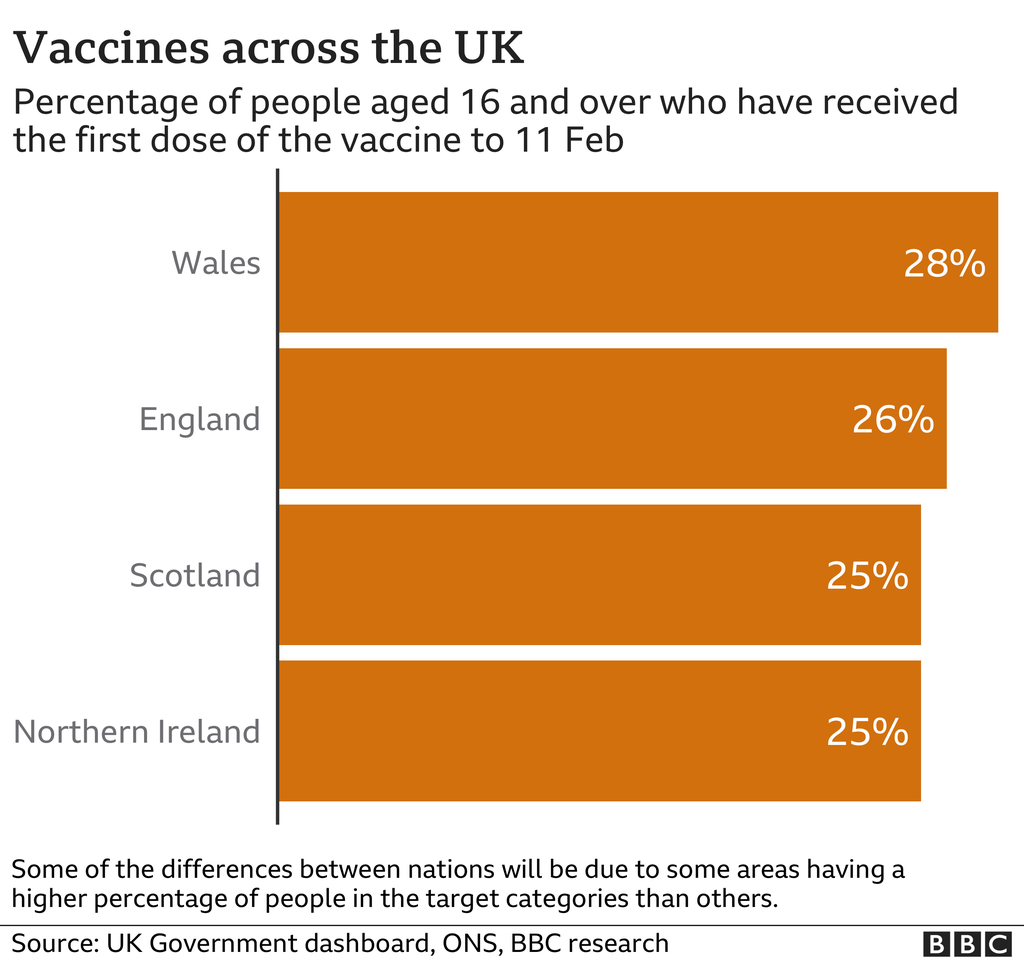 Across the UK, a quarter of adults have already received one dose of a Covid vaccine.

In Wales, the percentage of over-16s vaccinated is higher - at 28% - than in the other UK nations.

Nine out of 10 people aged 70 and over have taken up the offer to be vaccinated in England, the NHS says.

Latest figures for Wales, Scotland and Northern Ireland suggest their uptake numbers for the over-70s are lower, but these are not directly comparable with England. 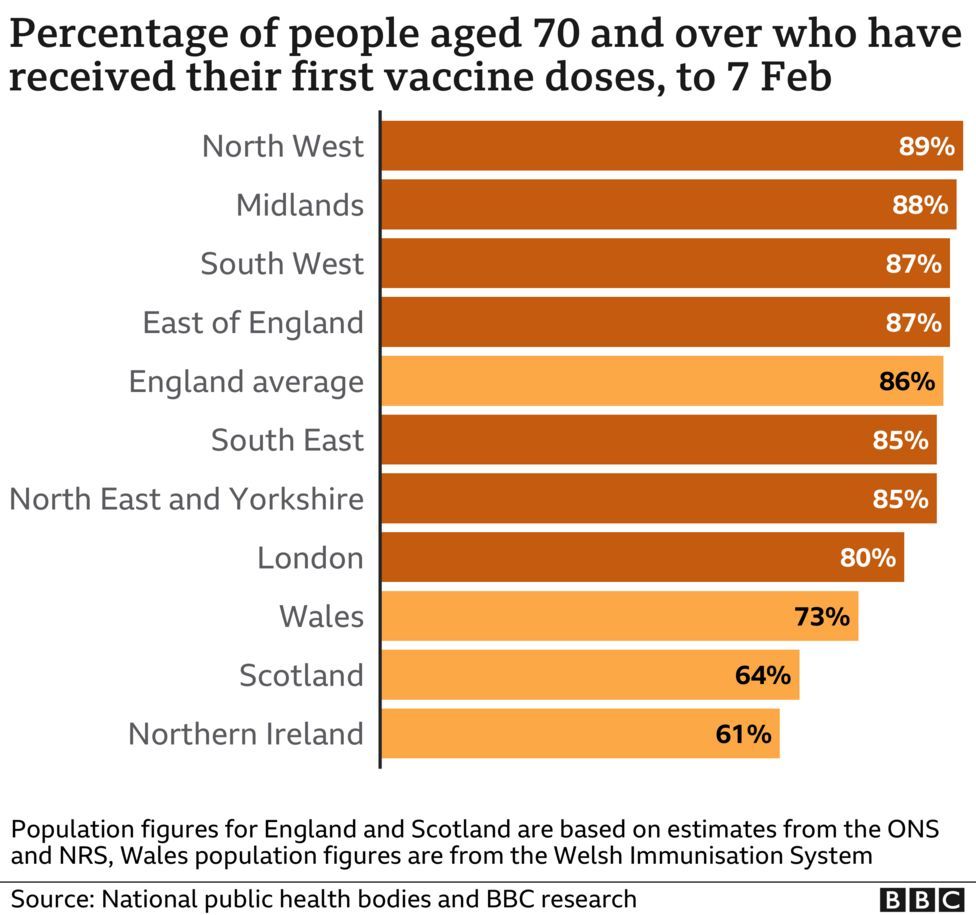 The latest data on other age groups in England, up to Sunday 7 February, suggests:

*  More than nine in 10 over-80s had been vaccinated in all English regions, apart from London where it was nearly eight in 10

*  London also lagged behind among 75-79 year olds, vaccinating 83% compared to more than 95% in all other regions

*  The north west had vaccinated 82% of 70-74 year olds, more than any other region in England

*  Around 10% of under 70s had been vaccinated in all regions in England. This group will include frontline health workers, care workers and those who are clinically extremely vulnerable

The smallest number of doses, nearly 1.3 million, had been given to people living in London. 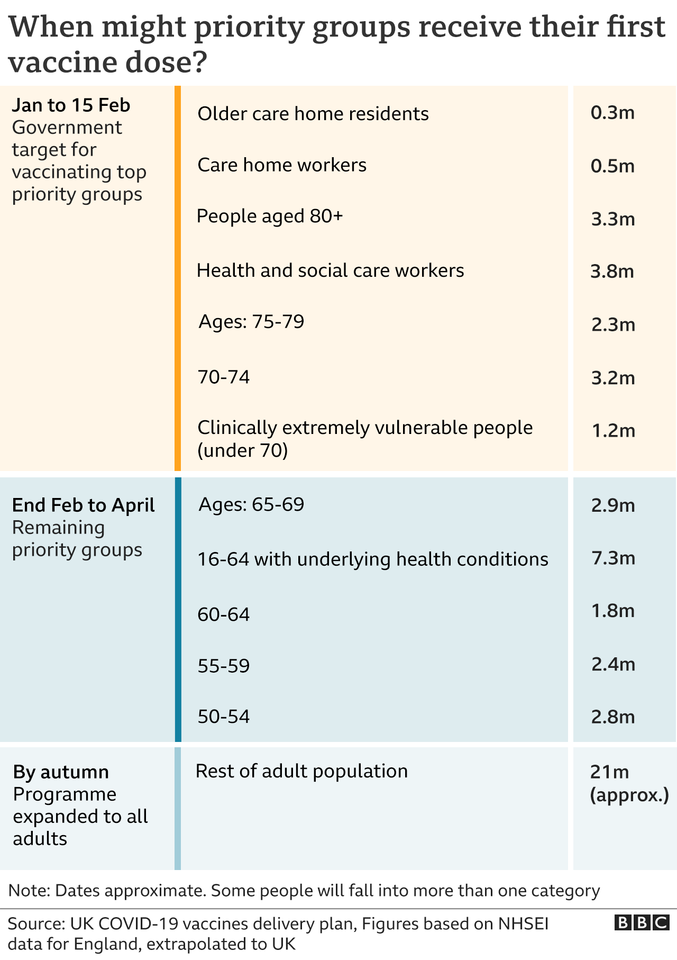 When did vaccinations start?

The UK's vaccination programme began on 8 December 2020 with people receiving the vaccine developed by Pfizer/BioNTech.

Both vaccines, which require two doses for full protection, were approved by the UK's medicines regulator.

A decision was taken by health officials to offer a first dose to as many vulnerable people as possible by extending the gap between doses to from three to four weeks to closer to 12 weeks.