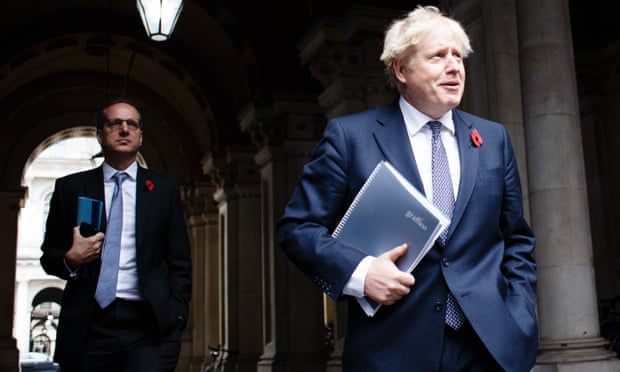 Boris Johnson was accused on Monday night of an “utterly outrageous” breach of lockdown rules as a leaked email showed one of his top officials invited more than 100 Downing Street staff to a “bring your own booze” party during the first lockdown. The police are now investigating.

The prime minister is believed to have attended the No 10 garden party on 20 May 2020 along with Carrie Johnson, then his fiancee, after it was advertised by his principal private secretary, Martin Reynolds.

“Hi all, after what has been an incredibly busy period we thought it would be nice to make the most of the lovely weather and have some socially distanced drinks in the No 10 garden this evening. Please join us from 6pm and bring your own booze!” the email seen by ITV News said.

It invited just over 100 employees to the gathering at a time when social mixing was banned except with one other person from another household outdoors in a public place.

About 30 to 40 are said to have attended, with food and wine set out on tables, but some staff reportedly expressed reservations at the time.

“Um. Why is Martin encouraging a mass gathering in the garden?” one staffer said, according to the BBC. Another asked: “Is this for real?”

On the same day, Oliver Dowden, the culture secretary, had reminded the public at a press conference: “You can meet one person outside of your household in an outdoor, public place provided that you stay two metres apart.”

The Metropolitan police had tweeted telling people they could have a picnic, exercise or do sport outside providing you are “on your own, with people you live with, or just you and one other person”.

On Monday night following news of the leaked email, the Met said it was “aware of widespread reporting relating to alleged breaches of the Health Protection Regulations at Downing Street on 20 May 2020” and said it had made contact with the Cabinet Office. Senior officers are expected to discuss the situation on Tuesday morning. The force has previously said it was policy “not to investigate retrospective breaches of such regulations”.

Johnson will now come under huge pressure to explain his own role in the gathering, whether he played any part in the invitation given the phrase “we thought it would be nice” and why his office did not listen to alleged warnings from his former aide, Dominic Cummings, that it appeared to be against the rules. Cummings revealed the existence of the 20 May party in a blog on Friday.

Johnson’s spokesperson declined to comment in light of a continuing inquiry into potential breaches of lockdown in Downing Street. No 10 did not deny this weekend that Johnson and his wife, Carrie, whom he married in May 2021, attended the event.

Tory MPs were furious about the leaked email on Monday night. One frontbencher said: “I think this is the worst exposed the prime minister has ever been by these leaks. There’s no explanation, there’s no way to distance himself. His only saviour is if the public has given up caring.”

A senior Tory insider said: “The rules were not just tweaked but snapped in half. This is now incredibly close to the PM. It’s very tricky to sack someone [Reynolds] for a party he [Johnson] attended.”

The party came five days after a 15 May 2020 “wine and pizza” party in Downing Street in the garden and inside No 10, reported by the Guardian, with staff drinking late into the evening.

After No 10 insisted staff were working, the Guardian published a photograph of Boris and Carrie Johnson sitting with officials at a table with wine and cheese, with 15 other staff in the background.

There have been reports of at least five other alleged gatherings in Downing Street and Whitehall in winter 2020, including a Christmas party, leaving do, quiz, No 11 flat party and drinks at the Department for Education.

Downing Street is now facing calls to ensure that Johnson himself will be personally interviewed by the Sue Gray inquiry about gatherings during the first lockdown.

Relatives of those who died from Covid reacted with anger to the leaked email. Hannah Brady, a spokesperson for Covid-19 Bereaved Families for Justice, said: “My dad died just four days before this email was sent out, he was only 55 and was a fit and healthy key worker … to think that whilst it was happening, Boris Johnson was making the ‘most of the weather’ and throwing a party for 100 people is truly beyond belief.

The email that proves over 100 staff were invited to a drinks party in the No 10 garden at the height of the lockdown.

“At the time, everyone would have known that going to a party was wrong, so how can those running the country have thought it was OK? Could there be a more disgraceful example of ‘one rule for them, and another rule for the rest of us’?

“To make matters worse, in September last year I sat in that same garden, looked the prime minister in the eyes and told him how my dad had died. He told me he had ‘done everything he could’ to protect my dad, knowing that he had partied in that same spot the very day that dad’s death certificate was signed. It makes me feel sick to think about it.”

Other bereaved relatives also made clear their anger after the email was leaked.

Angela Rayner, Labour’s deputy leader, said: “Boris Johnson has consistently shown that he has no regard for the rules he puts in place for the rest of us. He is trying to get officials to take the fall for his own mistakes, but he sets the tone for the way Downing Street and the rest of government operates.

“At the time this party took place, key workers on the frontline were working round the clock to keep us all safe, people suffered loneliness and loss in unimaginably tough circumstances.”

Ian Blackford, the SNP Westminster leader, said the email was “utterly outrageous”. “Boris Johnson must come clean and admit whether he attended, or was aware of, this Covid rule-breaking party in his own back garden,” he said.

“If the prime minister had a shred of integrity or an ounce of shame, he would have resigned many months ago. He has no moral authority left, and as he won’t go – his Tory MPs have a duty to remove him from power.”