As he ambles in for his annual health check, Kwanmueang's size takes your breath away.

Nearly three metres high at the shoulder, weighing at least four tonnes, and with spectacular tusks that curve together until they almost touch, the 18-year-old Thai bull elephant is an imposing sight.

Yet he and his keeper, or mahout, Sornsiri "Lek" Sapmak, are in trouble.

They used to make a living by having Kwanmueang take part in ceremonies to ordain new monks, or dress up as a war elephant for re-enacting historic battles. All that stopped during the Covid lockdowns.

More elephants are used for tourism in Thailand - over 3,000 - than anywhere else. Unlike other countries with captive populations, those in Thailand are nearly all privately owned. So the collapse of tourism during the pandemic has had a devastating impact on the elephants and their owners, who no longer earn enough to look after them.

Even as tourism starts to recover, another threat hangs over this unique industry. Ethical concerns over how captive animals are kept and trained are prompting many foreign visitors to boycott the elephant shows, which were once a staple of tour groups, raising questions over whether elephant tourism can ever go back to what it was before Covid.

Lek and Kwanmueang have come back to Lek's home village in Surin province - a region whose people are famed for their skill in keeping, training, and in the past capturing, elephants. 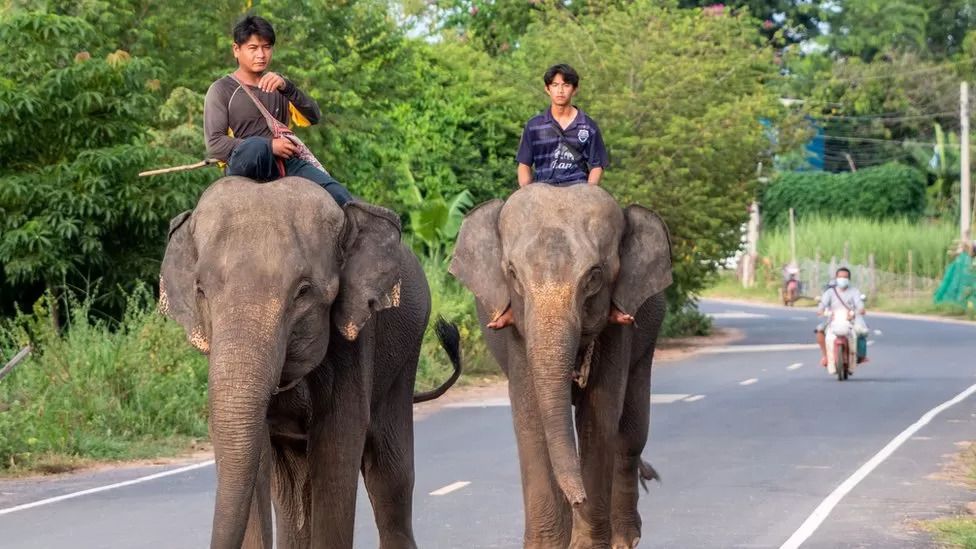 Elephants are everywhere in Surin
Lek is not alone. Hundreds of other elephants have returned to Surin from tourist hot spots like Phuket and Chiang Mai, where they made money by performing tricks or giving rides to foreign visitors.

Walking through these villages is a disarming experience. Nearly every house has one or more elephants chained up in their front yards, or resting under trees. You get used to seeing the huge animals plodding along the road, their mahouts straddling their broad necks, and when driving you learn to take care to move around them.

Boonyarat "Joy" Salangam owns four elephants, which she and her partner brought back from Phuket when tourism dried up in 2020. One is a playful baby, penned in with its mother in an enclosure Joy built in front of her house.

"Covid stopped everything," she says. "The mahouts, owners and elephants have all been unemployed. In the tourist camps the females are kept apart from the bulls, but here we have all been hanging out together, and the elephants have been having sex. We don't force them. They do it in their own time. So the population is increasing."

Joy says she thought about selling her baby elephant to raise funds - they can fetch as much as a luxury car - but worried about how well he would be looked after. Joy has lived with his mother, who is 39 years old, nearly all of her life, and inherited her from her grandparents. 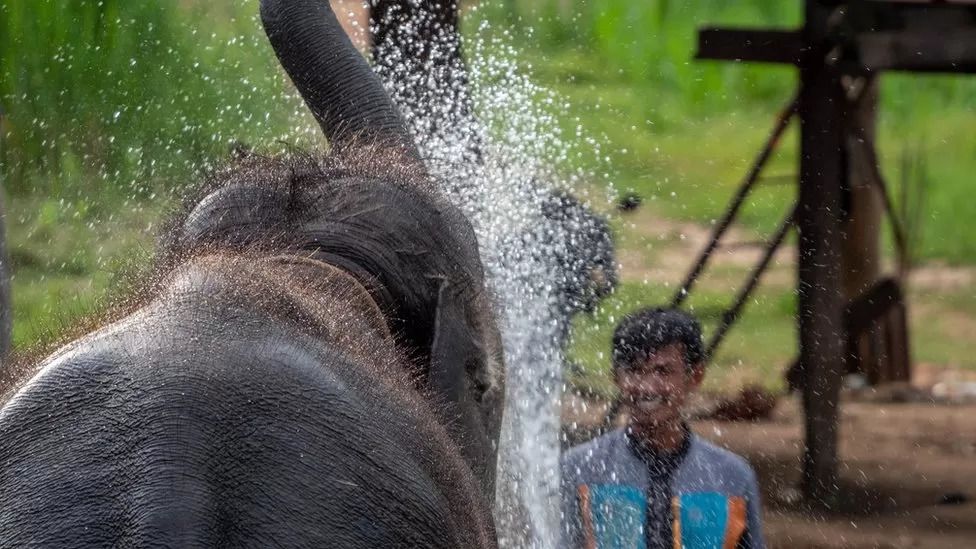 The mahouts too may live for decades with the same elephant from when they are both young, sometimes choosing to sleep with them, taking them to lakes or rivers to bathe in the evening, and keeping a close eye on their health. That has been a challenge under Covid.

Elephants are expensive. An adult needs to eat 100-200kg (220-440lb) of food a day, and drinks up to 100 litres (22 gallons) of water. Without any other income, owners like Joy have been livestreaming their animals on social media, while appealing for donations.

Sometimes this is done at home, as the elephants play or bathe, or they get a friend to ride a motorbike alongside them to film them on their evening walks. Viewers can pay online for the elephants to earn baskets of bananas by performing tricks, but this is not ideal for their health.

Their diet should mainly be different kinds of leaves and grass, but with so many elephants coming back to the area it is hard to find enough for them.

"We are finding they have digestive problems, because of the change in diet," says Nuttapon Bangkaew, a vet giving free check-ups offered by Elephant Kingdom, a project started seven years ago to improve the welfare of elephants in Surin.

"When the mahouts or elephant owners come back home, they don't have any income. So, they don't have money to buy grass or food for them. They have to do these social media livestreams to make money, but this causes health problems."

Elephants are native to Thailand, but the wild population has shrunk from around 100,000 a century ago, to perhaps only 3,000-4,000 today. In the past large numbers were captured and used in the logging industry, but when that was banned in the late 1980s to protect what remained of the country's forests, they started being used to entertain tourists instead.

In the earliest shows, they demonstrated their skill with logs. But these expanded, as Thailand's tourism boomed, to offering rides, or antics such as having the animals paint or play football. The campaigning group World Animal Protection (WAP) estimates that before Covid elephants generated up to $770m (£626m) a year for Thailand.

WAP is one of a number of groups trying to end the use of elephants for entertainment, arguing that it is unnatural, and always involves cruel training techniques. Many tourists are already seeking more ethical ways to experience elephants in Thailand. Some tour groups in Europe and North America will no longer send clients to elephant camps which include riding or bathing.

So a new niche has emerged in the eco-tourism industry to meet these concerns.

Saengduean "Lek" Chailert, a pioneer in ethical elephant tourism, opened the Elephant Nature Park, north of Chiang Mai, in the 1990s - both as a refuge for injured animals and to explore better ways to allow tourists and elephants to interact.

"We wanted to go fully ethical, to focus on conservation. So we decided to stop the programmes of elephant baths and feeding for tourists," she said.

That cost them half their bookings. And, she adds, tour operators said they couldn't send clients to them because everyone "wants to touch and hug the elephants, they want to put their hands on them". 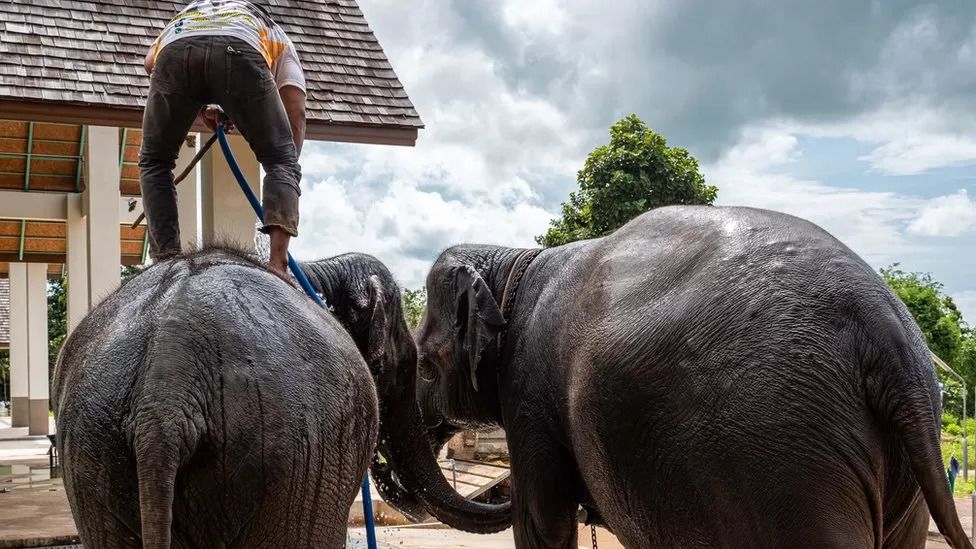 But today, Lek says, there are signs everywhere in Chiang Mai advertising "no bull-hooks, no chains, no riding".

"I checked in Koh Samui - before there were so many camps doing elephant riding. Now there are only two players left. In Phuket, only a few places are left, and in Chiang Mai, just two places."

However, ethical elephant tourism has its limits. Out of more than 200 camps which were operating before the Covid shutdown, only 11, including Lek's, get the WAP's approval.

Lek has a large plot of land, around 100 hectares (250 acres), along the Mae Taeng river. That is just about enough space for the 122 elephants she has - 45 of them rescued from bankrupt businesses during Covid - to be able to wander freely without being chained.

Other camps do not have that option. One, also in Chiang Mai, which advertises "ethical elephant tours", does allow bathing with humans. It says that because it does not have the means to build a sufficiently large enclosure it has to chain them in the evening, for the safety of the elephants and humans. 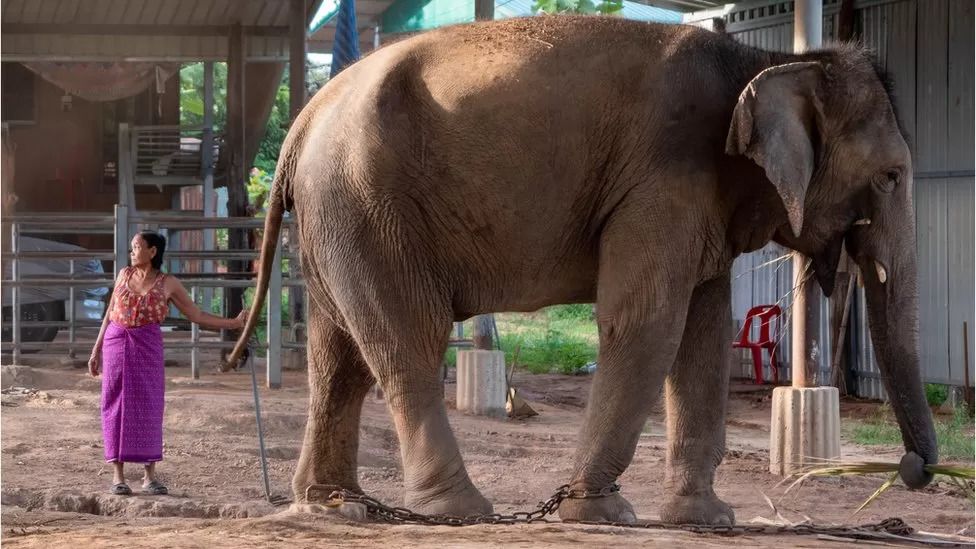 Some in the industry say this is all right; that there needs to be a more balanced approach between the abuses which used to characterise the industry and the demand of animal rights groups that all elephant entertainment should end.

"Riding elephants can be part of a system for taking care of them," says Theerapat Trungprakan, who heads the Thai Elephant Alliance Association, a group of elephant owners and business operators.

"They get to go to different places, going to a waterfall, for example, where they can drink the best quality water, or swimming there. It also increases the safety for the elephant to go with humans because there are dangers like pesticides or electricity cables beyond an elephant's judgement."

He describes some of the arguments made by animal rights groups as emotional and melodramatic, and believes that ethical sanctuaries can be less healthy, because without humans being paid to ride them the elephants get fewer opportunities to take long walks.

There are two debates now hanging over the future of Thailand's captive elephants. One is over what humans should and should not be allowed to do with them. The other, larger question is over what practical options there are for supporting such a massive population of large and long-lived animals.

"I have a wish list in my head, and on top of the wish list is to end the captivity of all wildlife, but we just know that that's not going to happen," says Edwin Wiek, one of the most prominent anti-trafficking campaigners in Thailand. 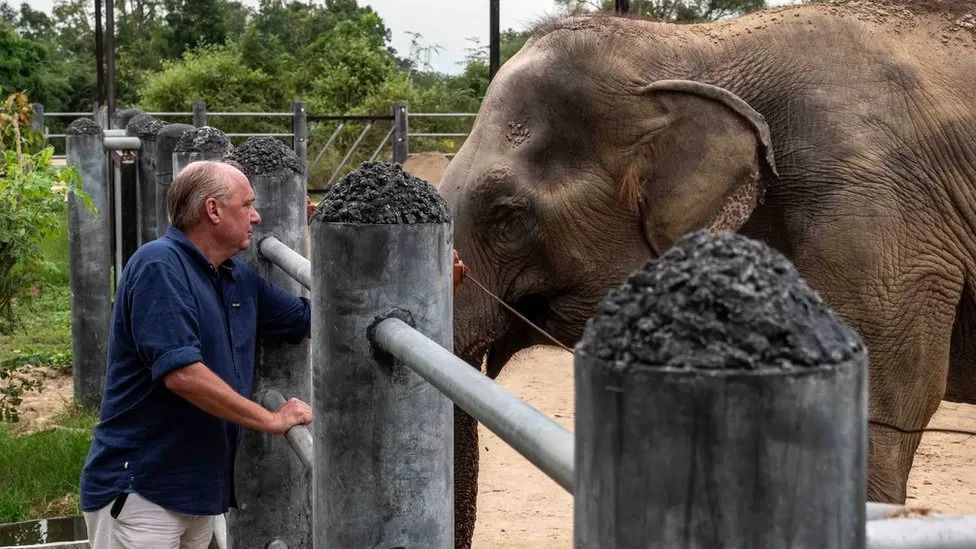 Edwin Wiek has worked with wildlife in Thailand for two decades

He started the Wildlife Friends Foundation of Thailand 21 years ago to rescue animals that were injured and kept illegally. He has 24 rescued elephants that roam freely in a 16-hectare corral.

"The ideal scenario would be having elephants semi-wild, like we keep them here, in large natural enclosures where they can hang around, bathe, run or forage for food, as they would in nature."

But he realises that would be a costly project with few takers given Thailand is home to 3,000 captive elephants.

"I'm afraid that the majority of elephants, three-quarters of them at least, will still need to find alternative income. And that means there will still be a lot of places where elephant rides, elephant bathing and feeding by tourists will be part of daily routine."

This is all the more likely to happen when tourists from markets like China, Russia and India start travelling to Thailand again, as they tend to enjoy the old-fashioned elephant entertainment shows more, which are often included on their package tours.

What Edwin Wiek believes should happen is for the breeding of domestic elephants to stop - so that the population falls to a level where they can all be kept in those ideal, semi-wild conditions, visited by the smaller number of tourists willing to pay just to see, not touch them.

Then, he says, the government could turn its attention to managing a growing wild population by creating corridors that allow them to move between Thailand's national parks and fragments of forest without coming into conflict with humans. 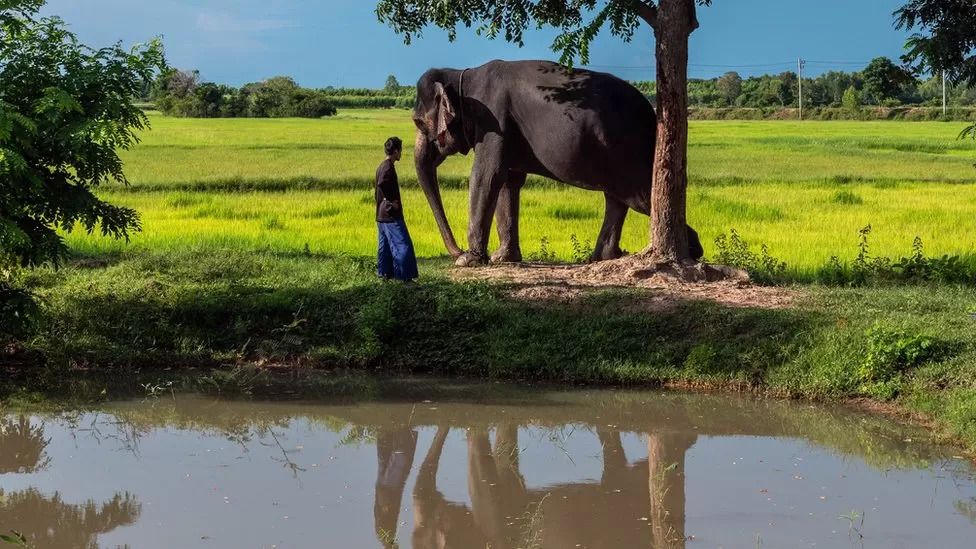 Thailand used to have an estimated 100,000 elephants living in the wild

But Thailand has no strategy in place for that. In fact, regulation of domestic elephants is a muddle, divided between three ministries which do not co-ordinate with each other.

So the future of these magnificent creatures is left largely with their owners, many of them still in precarious financial shape.

The mahouts are counting the days until the tourists come back in the numbers they used to, but also worry that the only business many of them know may be threatened by changing tastes.

Bringing her elephants back to Surin from Phuket cost Joy more than $2,000. She says she cannot afford to return there until she is sure the shows are getting big crowds again.

"Right now it is very difficult for us, because we don't have enough money. The elephants and humans are both unemployed. Will there still be shows? I think there will, but not so many, because some foreign tourists think we, those who keep elephants, do not love them, that we torture them with bull-hooks to make them perform. I think things will change."