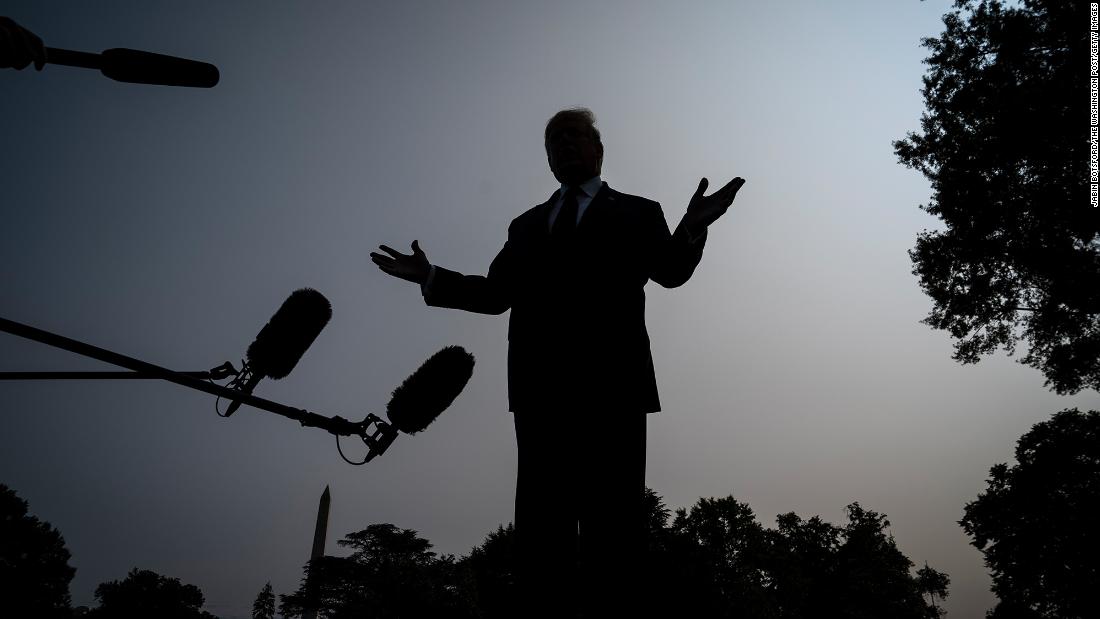 No matter what happens in the 2020 election, this chapter of American history could well be called the "fake news age."

One moment on January 11, 2017 crystallized it: When Trump pointed at CNN's Jim Acosta and said out loud, for the very first time, "you are fake news."
Acosta was trying to ask a perfectly reasonable question about Trump and Russia. The president-elect was cornered, and he responded with the "fake news" slur.

The presidential election is either a rejection of the Trump years or a four-more-years reaffirmation. If Joe Biden prevails, it will be — among a hundred other things -- a repudiation of the real-is-fake, down-is-up dynamic that has distorted American politics.

So it's an opportune time to take stock of what has changed in the past four years.

Trump bashed the media all throughout his 2016 campaign, but what he lacked was a "build the wall" type slogan. That's why January 11 was a turning point. Everything since — all the anti-media attacks and pro-Trump propaganda campaigns and Covid-19 denialism and assertions that you shouldn't believe your own eyes and ears — is rooted in Trump's "fake news" statement.

Trump weaponized a term that already existed and turned it into a bumper sticker, an insult, a punchline. In effect he challenged every American to choose:

Do you believe me or the press corps? He gave his fans an escape hatch, an all-purpose excuse, a rationalization for every bad bit of news: It's "fake." Or at least it could be, so don't stray from the pack, just trust your president and Sean Hannity and The Gateway Pundit.

A consistent majority of Americans saw this technique for what it was. But Trump's fake-out succeeded in separating much of his base from the outlets historically known as the "mainstream media." In the 1,378 days of his presidency, Trump has cried "fake news" more than 2,000 times, according to Factba.se. He has tweeted it a dozen times this week.

What the term 'fake news' used to mean

Here, I have to confess to my own little bit of guilt. I might be one or two percent responsible for catapulting the term "fake news" onto Trump's radar in 2016. But this isn't about me — it's about the history of the term.

In the 2000s Jon Stewart and "The Daily Show" were "fake news." In 2014 BuzzFeed's Craig Silverman started using the term to describe malicious made-up stories that preyed on peoples' fears. One early example tried to trick users into thinking that Ebola was spreading in Texas.

Silverman is both credited and blamed for coining this definition of "fake news." And like me, he has some regrets. So I asked him to join me for a conversation on this week's "Reliable Sources" podcast, about what "fake news" was and what it has become.

Silverman did a real service by identifying a very real phenomena that persists today: Made-up stories that are designed to deceive people and are primed to spread virally on social media. He and a handful of other reporters were all over this beat in 2016. I say that I share in the responsibility because, in the weeks leading up to Election Day, I used my platform on CNN to call attention to this "fake news" plague.

I pointed out that there were all sorts of made-up stories spreading on Facebook and other sites, and that most of these lies ("Pope endorses Trump") were concocted to help Trump and hurt Clinton. What we didn't know was that stories were being written and distributed by Russian hackers. Others were written by Americans trying to make a quick buck with ads.

After Trump won the election, "fake news" received a lot of attention. Silverman's pre-election stories suddenly gained a lot more web traffic. Some commentators even claimed that Trump voters were tricked into supporting him. To be clear, no credible news outlets actually cited "fake news" as the reason for Trump's election, but the speculation "trickled up to Trump," Silverman said. And Trump, sensitive to any suggestion that he didn't win legitimately, pulled a "jujitsu move" and called the real media "fake."

What was it like for Silverman to hear Trump weaponize the term at that January 11 press conference? "It was CRAZY!" he exclaimed. And it's "a great little case study in how our information environment works." Trump redefined the term and stripped away the original context; world leaders with authoritarian tendencies used it as a cudgel; and "so our ability to actually have a focused conversation about, you know, actual fake news" was impaired.

The thing that Trump does better than anything else, Silverman said, is "the exploitation of our information environment. He understood very early on that in a crowded field of candidates, and in a crowded and oversaturated information environment, extreme wins. And the stuff that was supposed to disqualify him became the things that started to bring people to him and get him the coverage and enable him to drown out everyone else."

With the term "fake news," Trump "took ownership of it that day in January and just hammered it and hammered it and hammered it." That's been a through-line of the Trump years: A president and his media allies "choosing to not only attack the press with that term, but also to elevate conspiracy theories like QAnon, to consistently attack the institutions and frameworks of credible information — that's been the theme over the last four years.

And that's why, in spite of platforms and funders and journalists and academics and so many aspects of society coming together to try and improve our information environment, that's why we still today have, in the United States, a more conspiratorial information environment than perhaps has ever existed in the country. And that's because of the power Trump has had and how he has chosen to use it."

The conspiracy theories have continued in the closing days of Trump's re-election campaign. In recent days he has baselessly claimed that the press is hyping the Covid-19 crisis to help Biden; that the news coverage of Covid will suddenly dissipate after the election; and that Biden can't win unless the election is rigged.

Platforms like Facebook and Twitter were basically blind to the disinformation problem in 2016. They've come a long way since then, but the media environment is still really difficult and "in some ways dangerous" for "the average person to navigate," Silverman said in our podcast conversation.

In 2020, there are so many more forms of disinformation. CNN has a regularly-updated guide to "false and misleading content online." This week the Washington Post and The New York Times both reported on lie-filled text messages that are making the rounds. The Times' Cade Metz said there are "increasingly widespread efforts to distribute disinformation through text messages," but the efforts are very hard to track.

On big platforms like Facebook, outright falsehoods are subject to fact-checking now, and the president's posts are sometimes labeled accordingly. But hyperpartisan memes and videos and articles are what the platforms "really still don't have any way of dealing with," Silverman said, and "that is the stuff that gets people really juiced up and, you know, fires up their anger and hatred.

And that stuff still travels really well." We're likely to see an inordinate amount of that content -- not false, per se, but misleading and sickening -- in the immediate aftermath of the election.