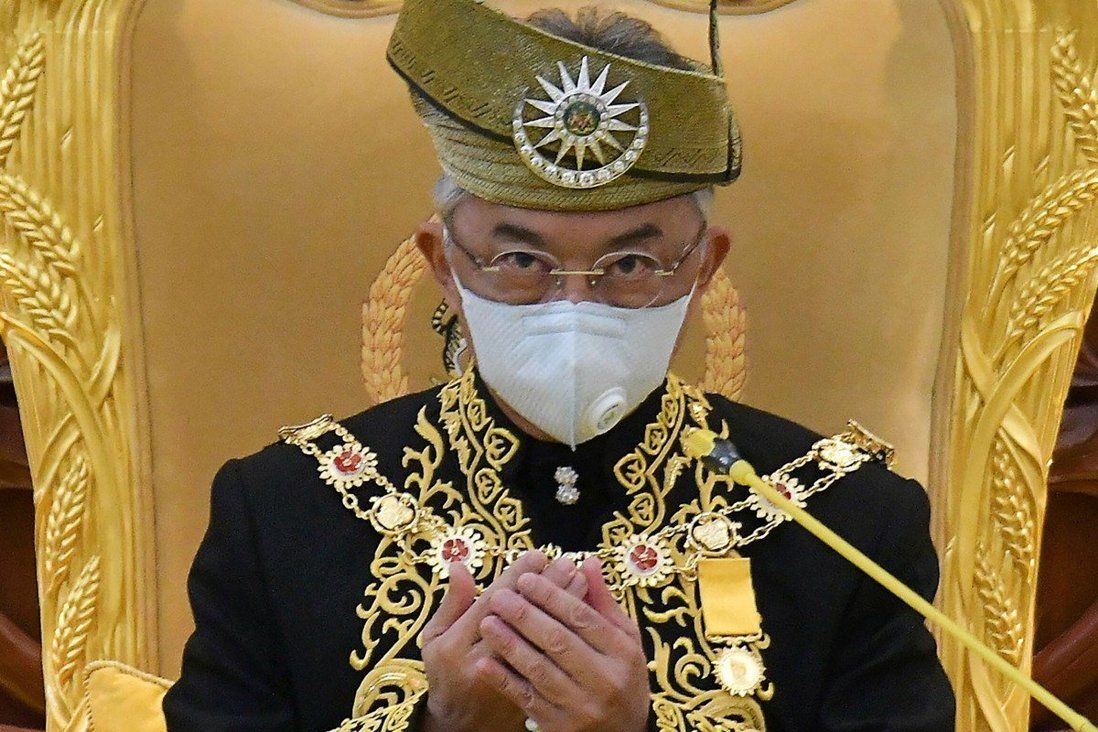 Sultan Abdullah has been urged to take five steps to help the country amid anger over the government’s handling of the Covid-19 pandemic.

A hashtag urging Malaysia’s king to intervene in Covid-19 measures or change the government has gone viral in the country, garnering widespread support, especially from younger generations.

The #KitaMintaLima (We ask for five) hashtag, reminiscent of Hong Kong protesters’ “Five demands, not one less” slogan, calls on Sultan Abdullah Sultan Ahmad Shah to take five steps amid growing discontent over the Southeast Asian nation’s handling of the coronavirus pandemic.

It calls for a targeted and effective lockdown; a show of support for frontline workers and the channelling of resources to combat the pandemic; automatic bank loan moratoriums and stimulus packages for citizens; equal enforcement of the rules imposed under the lockdown; and e-learning devices and internet access for all students.

Failing this, “a change of government”, reads the poster containing the demands.

The hashtag quickly reached trending status on Twitter, with influencers and politicians sharing the poster and commenting on the movement. It remains unclear who started it, but as of Monday afternoon over 50,000 tweets had been sent using the hashtag.

“A socmed [social media] campaign that contains five requests from [the people] to the government, which cannot be identified to a single source, which is not initiated by any political party or identifiable NGO, and has been trending for close of 12 hours in Malaysia,” tweeted Syahredzan Johan, a lawyer and political aide.

Some Malaysians tweeted pictures of themselves holding up a hand with all five fingers outstretched.

Syahredzan and other influential Malaysians, such as author Hanna Alkaf, took to Twitter to urge the king to take action just weeks after he assented to Prime Minister Muhyiddin Yassin’s request to impose a national emergency that suspended parliament and allowed the Perikatan Nasional coalition to govern by fiat.

“It is unclear yet whether the movement will translate to actual change but it is common for people to voice discontent and push for policies online,” parliamentary observer Ong Ooi Heng said.

The hashtag most likely stemmed from the pressures of dealing with the pandemic but is unlikely to resonate with the working class, according to Awang Azman Awang Pawi, a political scientist at the University of Malaya.

“This is popular among the middle class who are very active on Twitter as a social resource,” he said. “But the working class are focused on survival, even though both levels of society are facing difficulties due to policies that haven’t quite hit their target.”

Malaysia is currently under a lockdown or “movement control order” until February 18, and has so far recorded 245,552 Covid-19 cases. On Monday, a record 24 deaths were reported, bringing the total number of coronavirus-related deaths in the country to 896.

The “five demand” model was previously used by Hong Kong protesters calling for the resignation of Chief Executive Carrie Lam among others, and more recently by student leaders in Myanmar demanding democracy following the military coup. 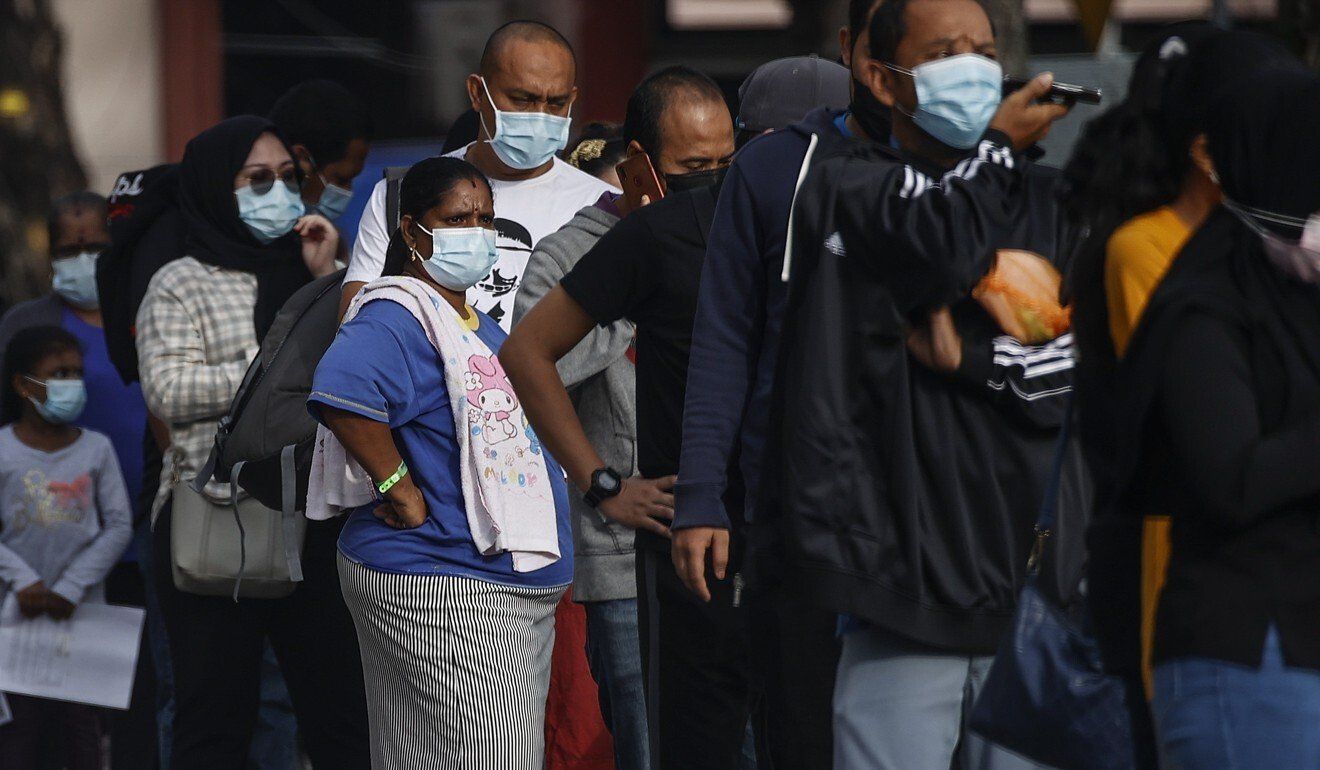 People line up outside Covid-19 assessment centres at Port Klang, outside Kuala Lumpur.

The #KitaMintaLima hashtag is not the only grass-roots movement making waves in Malaysia. Last week, a group of civil society organisations filed a public interest suit against the prime minister and government over the national emergency, voicing concerns that parliament was suspended while it was business as usual for the government, judiciary and private sector.

“We are concerned that the proclamation of emergency … has resulted in both Houses of Parliament being unable to fulfil their constitutional role of debating and voting on the Emergency Ordinance,” said the groups, which include Bersih 2.0 (The Coalition for Clean and Fair Elections) and the Centre for Independent Journalism.

As a constitutional monarch, Malaysia’s king plays a largely ceremonial role but has certain powers including selecting a prime minister to lead the government, and declaring a state of emergency on the advice of the prime minister if the “security, economic life or public order” of the nation is threatened.

In October, Sultan Abdullah rejected Muhyiddin’s initial request for an emergency, a move lauded by opposition politicians who had accused the premier of using the pandemic to preserve his tenuous grip on power.

Muhyiddin was appointed prime minister in March 2020 after a political coup in which the previous Pakatan Harapan ruling coalition lost its parliamentary majority.

The king has since assumed a more dynamic role during the country’s political turmoil and back-room negotiations when opposition leader Anwar Ibrahim attempted to become prime minister.

Anwar met with the king in October, after which the Palace released a statement saying the ruler had asked him to abide by the Constitution.

Anwar has taken the matter to court, in January filing for leave to initiate judicial review in a bid to challenge the government’s decision in advising the king to declare the emergency, calling the cabinet decision “invalid and unconstitutional”.