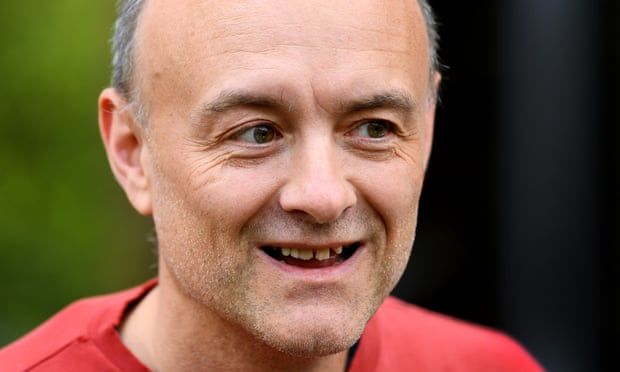 It promises to be the parliamentary event of the year so far – and may yet determine the fate of the prime minister.

On Wednesday next week, Dominic Cummings will give evidence to MPs about Boris Johnson’s role in making key decisions that critics say may have cost many thousands of lives.

Hurt by the manner of his departure from No 10, alongside Johnson’s longtime aide Lee Cain, and by the briefing war that then ensued, Cummings seems intent on doing maximum damage to his former boss.

“He doesn’t like the way he left: he thinks he should still be there,” said one senior Tory who knows Cummings well. Asked about Cummings’ intentions, he added: “I think he wants to get Boris out.”

So febrile is the mood at Westminster about the eagerly anticipated hearing that Downing Street was forced to deny on Friday that Johnson is planning a reshuffle on Wednesday, solely to draw attention away from his former aide. “We are not doing a reshuffle,” insisted a No 10 source.

One cabinet minister fretted that Cummings could use the cloak of parliamentary privilege to disclose confidential information about key discussions last year – including potentially handing over documents, something Cummings has suggested he is prepared to do.

The timing of the decisions to implement the lockdown in March 2020 and again in October – weeks after it was recommended by the Sage committee – are likely to come under close scrutiny.

In a recent tweet highlighting the health impact of Covid, Cummings wrote: “Many thousands will have serious health problems for years because of our failure to act faster/harder in Feb/March & Sep”.

The government’s border policies throughout the pandemic are also likely to be examined: Cummings recently described them as a “joke”.

Border restrictions remain contentious, with MPs questioning why Johnson waited until 23 April to put India on the red list – a decision that appears to have been a factor in allowing the variant first identified in India, B.1.617.2, to take hold.

Whether Cummings’ revelations will actually damage Johnson remains to be seen, however. The former adviser’s standing with MPs has never been high.

They remember in the heat of the Brexit parliamentary battle, he was reported to have yelled at Clark, one of the inquiry’s co-chairs: “When are you fucking MPs going to realise we are leaving on October 31? We are going to purge you.”

Loyalty to his erstwhile bosses has never been a strong point for Cummings, either. After leaving the staff of the then Tory leader, Iain Duncan Smith, in 2003, he wrote a Telegraph article claiming: “Mr Duncan Smith is incompetent, would be a worse prime minister than Tony Blair, and must be replaced.”

Moreover, few colleagues believed his account of his comings and goings to Durham, and his outing to Barnard Castle to “test his eyesight”, even before their postbags overflowed with furious constituents expressing their disbelief and fury.

Those who worked in government with Cummings during the frantic early days of the pandemic say they don’t remember him being as enthusiastic an advocate of lockdown as he now appears with the benefit of his own hindsight.

One former colleague recalled watching his last select committee appearance and thinking: “This guy seems to have some good ideas: if only he had had them while he was in government!”

However, they do remember him returning from his jaunt to Durham having – ironically – been won over to the idea that strict lockdowns and tougher border restrictions were the best approach to containing the virus from both a health and economic perspective.

That set up a clash in September, when Johnson and the chancellor, Rishi Sunak, were sceptical about the need for a fresh “circuit-breaker” lockdown: something the prime minister eventually reluctantly implemented on 31 October. Cummings is expected to spill the beans on Johnson’s reluctance.

Downing Street is keen for all these questions to be set aside for now. The prime minister recently announced that a public inquiry would examine the government’s handling of the pandemic, but it will not begin its work until spring next year and is unlikely to report before the next general election.

But the joint inquiry by the cross-party health and science select committees, chaired by the former Tory cabinet ministers Jeremy Hunt and Greg Clark, is working to a much tighter timescale.

In Cummings’ latest Twitter posts – delivered, he said, while awaiting his vaccination – he rubbished the idea of a public inquiry.

“The point of the inquiry is the opposite of learning, it is to delay scrutiny, preserve the broken system & distract public from real questions, leaving the parties & senior civil service essentially untouched,” he said.

Instead, he wants lessons to be learned now – including, perhaps, about his former boss’s personal failings. And with most of the key players still in post and bound by collective responsibility, testimony from someone who was on the inside when many of the critical decisions were made is bound to be revelatory.

Yet after last month’s upbeat election results, and with the vaccine rollout giving way to the promise to “build back better” – more natural territory for the boosterish Johnson than the months of rolling crisis – many at Westminster believe the prime minister can ride out anything his former aide can throw at him, at least for now.

As one senior Tory who sympathises with Cummings put it: “The truth is, Dom is right on a lot of these issues: there was advice to lock down earlier, and that wasn’t taken, and ultimately that’s a matter for the prime minister.

“But with all of these things, it’s the narrative: and the overall narrative now is how we have come out of this. The public don’t want to hear it: that’s the blunt truth.”
#vaccine  #covid  #boris johnson
Add Comment