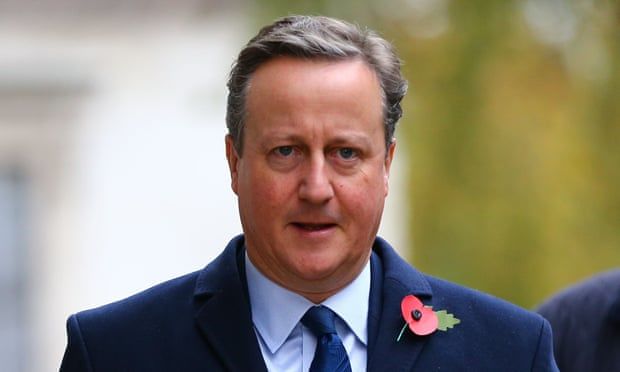 David Cameron has quit his role at the software company Afiniti after a 23-year-old former employee accused the firm’s multimillionaire founder of sexual assault.

The former UK prime minister announced on Wednesday he was immediately standing down as chair of its advisory board after Tatiana Spottiswoode detailed a string of allegations against the chief executive, Zia Chishti, to members of Congress in the US on Tuesday.

Cameron, whose post-political career was previously tarnished by his role at the collapsed bank Greensill, said he had “absolutely no knowledge” of the allegations against Chishti before the hearing and he had resigned as chair of the company’s advisory board with immediate effect.

“The alleged events took place before David Cameron started working for Afiniti and he had absolutely no knowledge of them until just before yesterday’s congressional hearing,” the former prime minister’s spokesperson said.

“Mr Cameron understands that the allegations are disputed but disagrees with the approach being taken by the company in responding to the matter. He made this view clear to Mr Chishti yesterday.”

Chishti, 50, is accused of beating Spottiswoode while having sex with her on a work trip to Brazil in 2017. She also told the US House of Representatives’s judiciary committee that Chishti had told her “he should have had sex with me when I was 13 years old”.

Afiniti, which also employs Princess Beatrice, said Chishti “strongly disputes all accusations against him” and said her claims were “erroneous”.

“We take any allegations of this nature extremely seriously,” a spokesperson said. “Afiniti has investigated Ms Spottiswoode’s claims with independent counsel and concluded that the arbitral decision she references was erroneous. Afiniti’s CEO and chair Zia Chishti strongly disputes all accusations against him.”

Cameron joined Afiniti, which provides call centre technology to companies including Virgin Media and Sky, in 2019 as chair of its advisory board, providing strategic guidance to the company’s management and board members. At the time of his appointment, he said he would help “transform the future of customer service and interpersonal communications”.

Spottiswoode, who joined the company in 2016, told the committee her contract included an arbitration agreement with a “strong confidentiality clause” that had prevented her from speaking out about the alleged assaults.

She was giving testimony to a hearing into how forced arbitration clauses have been used to prevent survivors of sexual harassment and sexual violence from pursuing cases through the courts.

Jerry Nadler, the chair of the judiciary committee, is preparing legislation that would ban the use of forced arbitration in cases of alleged sexual violence and harassment.

Spottiswoode, a Columbia University law student and friend of Chishti’s daughter, told members of Congress that Chishti pressured her into having sex in order to keep her job.

She accused him of “not [being] willing to treat me like an employee”. She added: “Instead, over the next 18 months he oscillated between pressuring me for sex and punishing me. When I rebuffed him he humiliated me in front of co-workers and then ignored me completely, causing me to fear for my job.”

She said on the work trip to Brazil she “began to worry that, in addition to wanting sex, Chishti wanted to hurt me and punish me for rejecting him”.

“I felt completely trapped and hopeless. I was 23 and very far from home,” she told the committee. “I didn’t want to lose my job, I didn’t want him to get any angrier, I did not feel that anyone would protect me and I was too tired to argue with him any more. I went to his room where he beat me while having sex with me.

“I told him he was hurting me, he said: ‘Good’. He told me he should have had sex with me when we first met, when I was 13 years old.”

Spottiswoode said her body was “covered with scratches, cuts and contusions”. “I had bruises around my neck that looked like I had been strangled, a large bump on my head, and a black eye. A nurse at the hospital said I had the symptoms of a concussion.”

Cameron’s career since leaving Downing Street in 2016 has been tarnished by his role lobbying on behalf of collapsed bank Greensill. He was told by MPs on the Treasury select committee that his persistent lobbying to have Greensill included in a government-backed Covid-19 loans scheme had “demeaned” the position of the prime minister and left his “reputation in tatters”.

The former PM was forced to deny that his text message and WhatsApp lobbying campaign on behalf of Greensill was driven by fears that an “opportunity to make a large amount of money was at risk”.
#covid 19  #covid
Add Comment