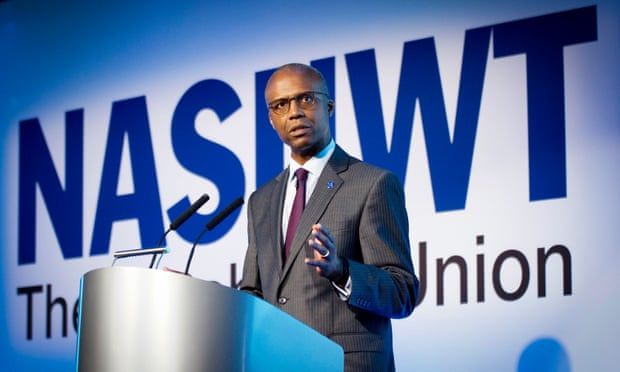 Culture of sexual abuse in schools toxic for teachers too, says union

Female teachers as well as pupils are victims of a toxic culture of sexual abuse within schools, according to a teaching union leader who said harassment by boys is “the tip of the iceberg” of behaviour that some schools are failing to confront.

Patrick Roach, the general secretary of NASUWT, said his members had made it clear that female teachers face patterns of abuse and harassment similar to those revealed by pupils and students in harrowing detail on the Everyone’s Invited website in recent weeks.

“If there is a toxic culture in any school, it’s not just toxic for students, it’s toxic as well for teachers, for our members,” Roach said.

He said schools’ tolerance of sexist harassment and abuse was likely to affect all women, whether staff or students, and leave them afraid of walking alone in corridors.

“Misogyny and sexism is all too real, all too apparent, whether it’s on the streets and whether women can walk safely at night, or in our schools and whether female teachers and students can feel that they are safe to walk along the corridors without having to think about how they’re dressed, whether they’re walking alone and how they’re going to be treated by pupils, or indeed by colleagues and parents,” Roach said during the union’s annual conference.

He said no women should feel unsafe inside a school, but such experiences were “part and parcel” of the casework his union had to deal with.

Last week the Department for Education initiated a review to be carried out by Ofsted inspectors looking into how schools handle allegations of sexual abuse or harassment, after thousands of complaints aired on Everyone’s Invited of schools taking little or no action.

Roach said that while he didn’t want to “demonise” boys, “there is definitely a situation in which some boys are engaging in practices which, frankly, are not acceptable. And it’s also the case that some schools, some employers, are not doing enough to counteract that” by tackling sexism and misogyny.

“We are seeing, whether it’s so-called banter, sexist name-calling, the use of derogatory terms both in class and online to talk about your teachers, the posting of sexist comments on social media, the belittling of teachers because of their sex or gender,” Roach said.

“We’re seeing this also with regards to our trans members – female trans members – who are particularly experiencing problems around discriminatory behaviour and unacceptable comments. Through to some of the extremes that we’ve pointed to before – cases of upskirting, down-blousing, inappropriate touching, and we fear that’s probably representing, to some degree, the tip of the iceberg.

“So it is very concerning, and certainly we are committed to working with the government, with Ofsted, the NSPCC and with others to address those issues.”

NASUWT members passed a motion at the conference deploring bullying aimed at teachers, and another backing industrial action in schools unwilling to tackle serious pupil indiscipline or abuse.

In his speech, Roach listed what he called “a catalogue of government failures” and U-turns, including the chaos over last summer’s exams, inadequate funding and a “wanton disregard” for measures to keep staff safe working in schools during the pandemic.

Roach also revealed that some school managers were refusing to give staff time off to receive their Covid vaccinations. The union said it had heard of so many teachers being denied leave that it had approached Gavin Williamson, the education secretary, for help.

“I wish it was only a one-off but the number of times that’s come across my desk I cannot begin to tell you. It has been pretty widespread,” said Roach.

He said teachers should not be coerced into working during the summer holidays as part of the government’s catch-up plans for pupils.

“The term catch-up is not helpful. As if somehow the 850m days of learning that’s been lost to pupils in England is going to be made good as a result of two weeks in the summer holiday to catch up? That, frankly, is fanciful,” he said. “But what we do need to do is to assess the learning needs of pupils, and teachers need to be given the time and the support to be able to do that.”
#covid
Add Comment