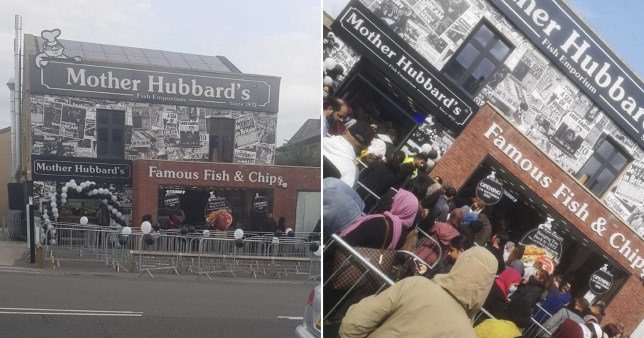 'Absolutely shocking, people queuing like sardines, no social distancing, no masks - and all for 45p fish and chips.'

A chippy has come under fire after drawing in huge crowds with a bargain deal, as coronavirus cases soar in the UK.

Hundreds of customers were accused of ‘flouting social distancing rules’ as they flocked to Mother Hubbard’s fish and chip shop in Bradford, West Yorkshire to score fish and chips for just 45p at the weekend.

One local has claimed ‘people were queueing like sardines’, while another has accused the shop of ‘contributing’ to a potential second wave, as the area sees a surge in cases and the UK’s R Number rises above 1.

However, the owners of Mother Hubbard’s have defended the move, insisting that face masks and hand sanitiser was handed out and metal barriers were in place on the day.

Nicola Khan, who captured video of the queues, claimed customers were not wearing face coverings or adhering to social distancing as they swarmed the shop.

She said: ‘Absolutely shocking, people queuing like sardines, no social distancing, no masks – and all for 45p fish and chips.’

The chip shop was shared on social media

Another passer-by said scenes like the one outside Mother Hubbard’s are ‘definitely a contributing factor’ in rising infection rates.

The infection rate in Bradford was 71 cases per 100,000 in the seven days to 8 September, Bradford Council said.

A spokesperson from Mother Hubbard’s said: ‘Our priority is to keep the public and our staff safe, that is always our intention.

‘In the videos and pictures, the scene did look chaotic, but they don’t tell the full story.

‘We had professional barriers in place, we had markings on the ground so people could socially distance, we were giving out masks and hand sanitiser to the customers and only two to three people were allowed inside the store at one time.

‘We can understand why people have perceived the scenes negatively, but we tried our best to manage things.

‘If you look at the government’s eat out to help out scheme, no restaurants in Bradford had the same measures that we had in place yesterday.

‘We saw long queues outside restaurants across Bradford during that scheme. None of them went to the extent of having barriers or handing out masks, but we went to the next level and we prepared professionally. We invested a lot of money in keeping people safe.’

The 45p deal was a homage to the prices that were on offer at Mother Hubbard’s when it first opened in 1972.

The spokesperson added: ‘We made this decision in the name of community spirit – everyone has had a tough time due to COVID-19, so we wanted to give something back.

‘It was all about bringing back the nostalgia of 1972 and supporting the local community.’