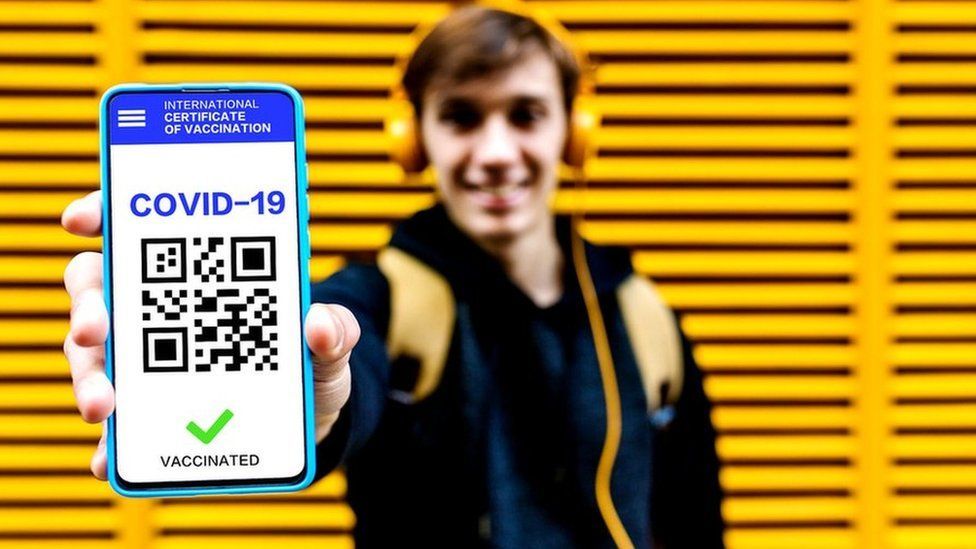 Ministers will decide next week if vaccine passports should be used to gain entry to some events in Wales, the first minister has said.

Mark Drakeford also said there could be as many as 100 new Covid hospital admissions a day in Wales as the Delta wave peaks at the end of this month.

People will need passports for some events in Scotland from 1 October and in England from the end of this month.

Mr Drakeford said rising rates meant it would be irresponsible not to consider.

"There are a number of practical and ethical issues that need to be considered in relation to vaccine certification, and we continue to work through those," said Mr Drakeford.

"We will not do that in any setting where people have no choice but to go, so there will be no vaccine passports for people who need to go to use crucial public services."

A decision will be made ahead of a planned three-weekly review of the Coronavirus regulations next Friday.

The Welsh Conservatives said "we have got to learn to live with Covid" as their health spokesperson Russell George said he was "absolutely against Covid passports for domestic use".

However, Plaid Cymru's Rhun ap Iorwerth said Covid passports should not be totally dismissed and he would be prepared to support their use in "very, very limited places".

It comes as Mr Drakeford warns daily hospital admissions - currently 40 Covid patients a day - could more than double by the end of the month, based on modelling work carried out by Swansea University.

He said patients would include many who need to be in hospital for a long time and need intensive care.

He said the position in Wales was a "serious" one and the number of cases was "likely to get worse over the coming weeks".

He said: "We now have very high rates of coronavirus in all our communities - rates, which our modelling says are likely to get worse over the next few weeks".

If the virus continues to spread at its current rate, there will be about 3,200 cases confirmed every day towards the end of the month, he said.

"Until now, this rise has been manageable, because our fantastic vaccination programme has helped to weaken the link between infection and serious illness but with the rapid spread of coronavirus in our communities, pandemic pressure on the NHS is increasing once again," he said. 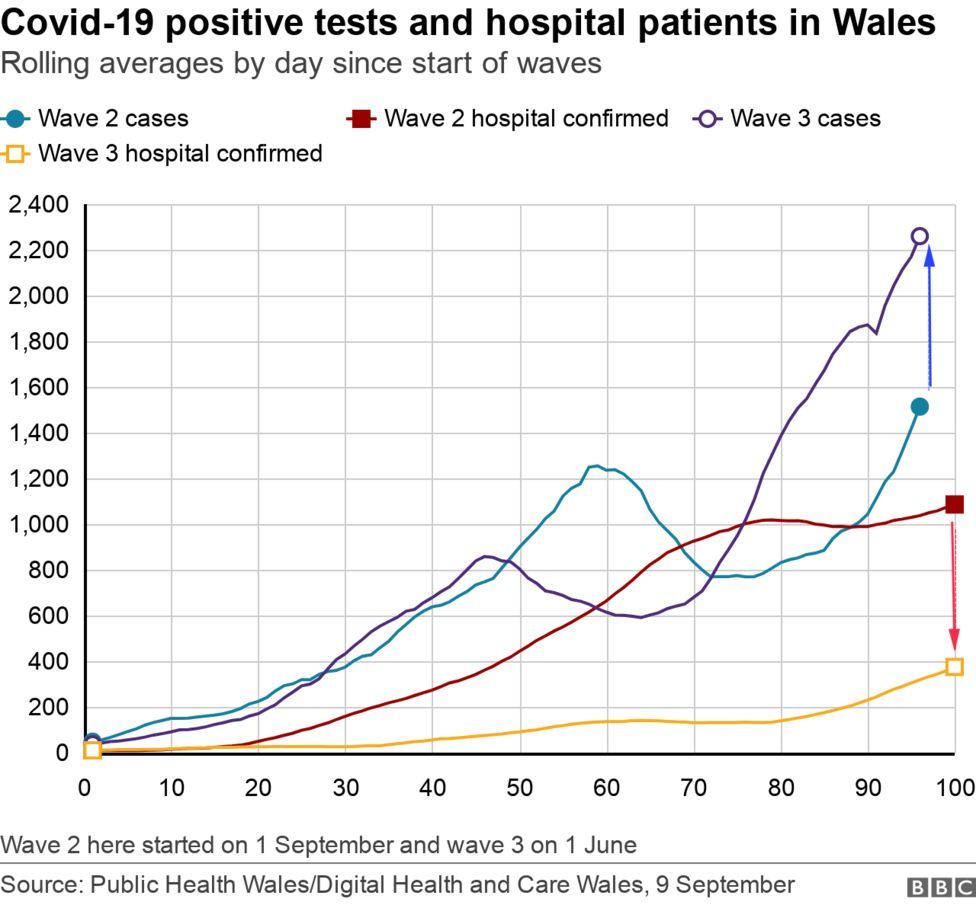 PHW said 522.7 per 100,000 population had tested positive for the virus in the past seven days - the highest Covid cases rates since the second wave in December.

Despite that, the number of patients in hospital, with confirmed Covid, was three times higher then.

PHW's figures also show in this wave there is a noticeable difference in the proportion of young people - those 19 and under - testing positive. 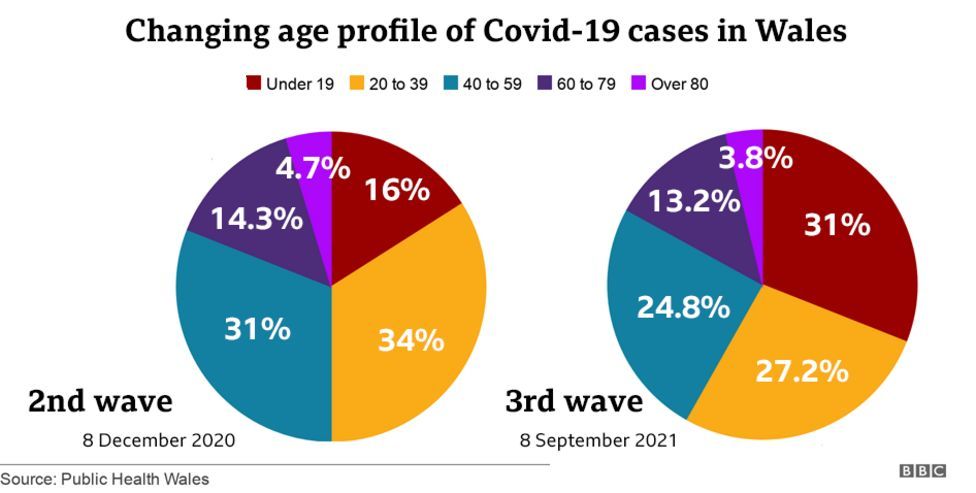 They are now the largest age group, making up 31% of positive tests.

At a similar point in the second wave, also the day that the vaccine programme began, it was only 16%.

According to the Office for National Statistics (ONS), the average number of daily deaths in the second wave was eight times higher. 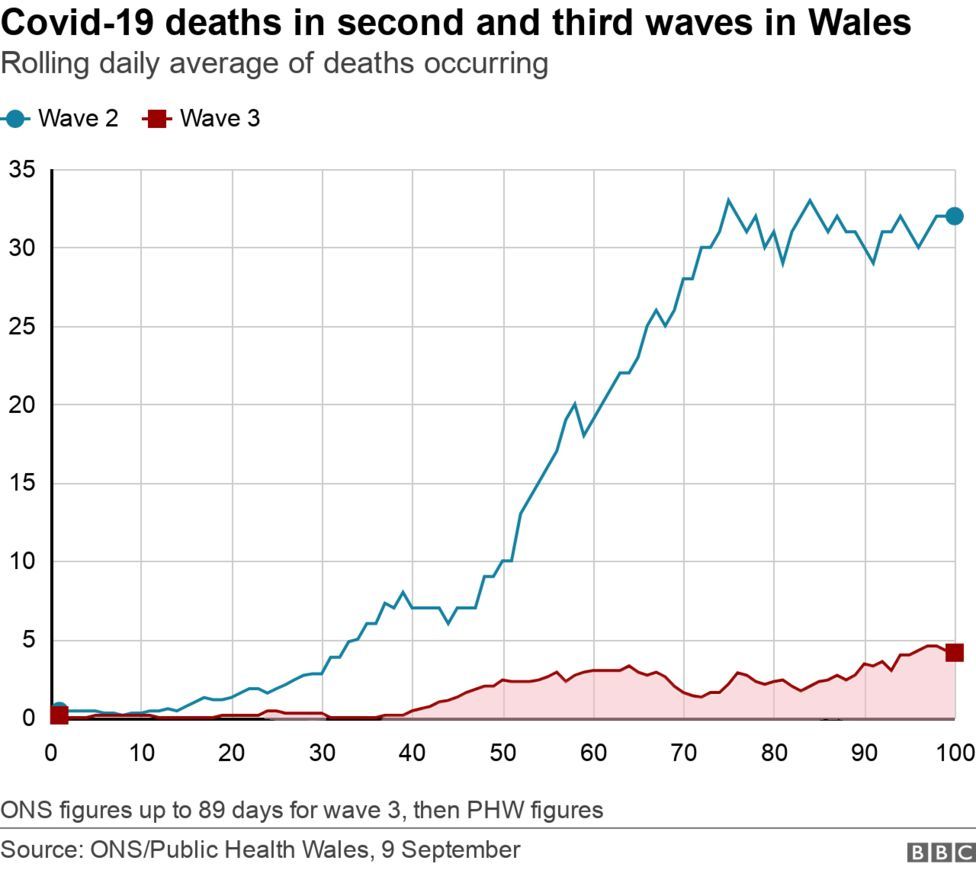 The daily average is currently four a day - it was 32 deaths a day at this point in the second wave, under the most reliable ONS measure.

If we only take the PHW measure, it was averaging 24 deaths a day, still six times higher.