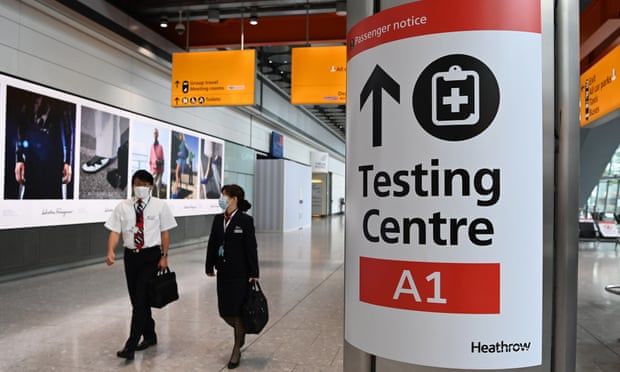 A company claiming to provide cheap Covid tests for travellers has been removed from the government website and is being investigated by the competition watchdog after complaints its tests did not arrive on time and it failed to refund customers.

The Competition and Markets Authority (CMA) said it had opened a formal investigation into Expert Medicals after receiving a high number of complaints about its service and that it had refused to give customers their money back.

A further 19 firms have also been told to stop advertising misleading prices or risk legal action, it said.

Andrea Coscelli, the CMA’s chief executive, said if firms failed to “provide the service that people have paid for” it was ready to act. It wanted to “ensure the PCR testing market works for consumers” and is “preparing to take further action”.

Dozens of companies offering PCR (polymerase chain reaction) tests were set up earlier this year after the government set out a regime under which millions of travellers arriving in England are required to take the tests but must buy them from private companies.

Testing companies are listed on a government website for consumers to search, with results appearing in order of price, with the cheapest at the top. Until it was removed, Expert Medicals offered the lowest priced day 2 and day 8 tests.

The crackdown follows multiple allegations that private providers, who are thought to have made more than £500m out of travellers since the return of international leisure travel in mid-May, have failed to deliver tests, send results and process refunds.

Consumers initially contacted Citizens Advice to complain about Expert Medicals but had subsequently gone on to contact the CMA.

The Bradford-based company has been removed from the official list of providers but the watchdog said no decision has been made on whether the law had been broken.

The CMA said it had also written to a further 19 test providers telling them to improve their pricing information or risk action in the future.

The watchdog is concerned these companies were “continuing to falsely advertise tests at very low prices when they are either not available at that price or include hidden conditions, such as where the tests must be collected from”.

In July, a Guardian investigation revealed that most of the cheapest two-swab packages listed on the government website were not available to holidaymakers who planned to go away during the summer months, with critics likening the situation to a “wild west” marketplace.
#covid
Add Comment