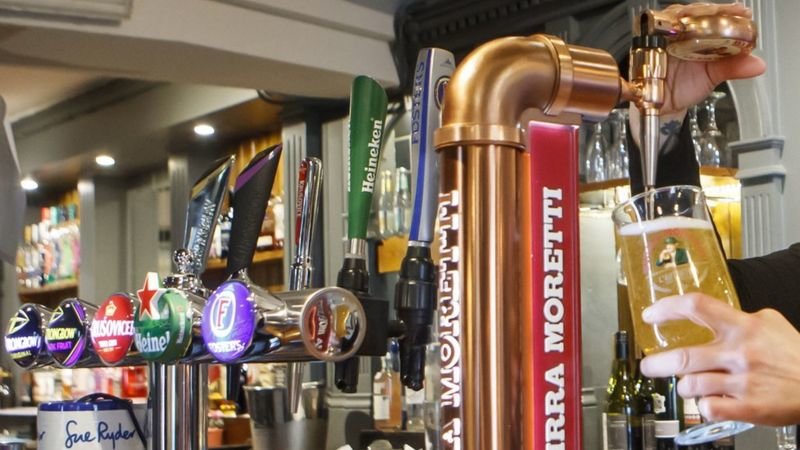 In areas placed in tier three, pubs and bars must close unless they are serving substantial meals.

But some social clubs are continuing to serve alcohol to members without a substantial meal after their local councils told them it was permitted.

The Department for Health and Social Care has been contacted for comment.

The British Beer and Pub Association's chief executive Emma McClarkin said the organisation was "aware of this inconsistency and are raising it with government to get clarity".

"Given the circumstances they find themselves in, it is vital, more than ever, that pubs have a level-playing field with clear guidance," she added.

There are thousands of members clubs across England, including Conservative clubs, working men's clubs and sports clubs.

Councils in Wirral, Preston and Fylde have all advised social clubs that the discrepancy exists because they hold club premises certificates and not premises licences.

The tier three regulations, which came into effect earlier this month, appear not to include private members clubs because they operate under a different law which means, in effect, the members own the drink already.

Preston Council posted advice stating membership based social clubs "do not sell alcohol, instead they supply alcohol to their members".

"Therefore the requirement to close does not apply to these premises and nor do these premises need to provide a substantial meal to club members or their guests when they are drinking". 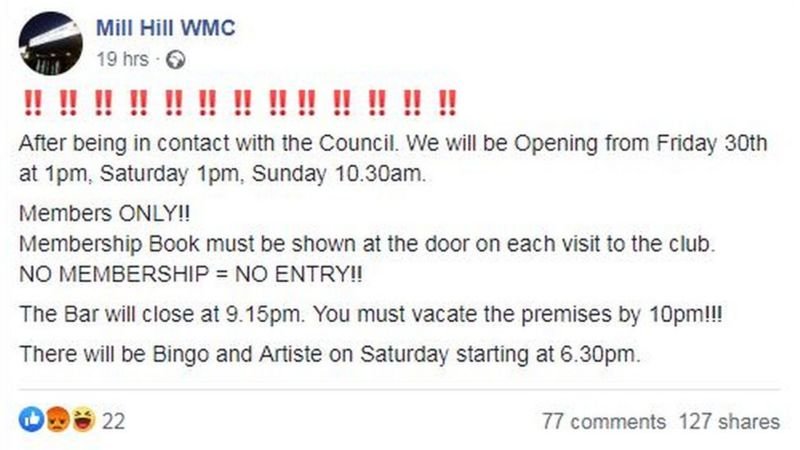 Mill Hill Working Men's Club in Blackburn posted on Facebook that it is planning to reopen on Friday, prompting some to celebrate and others to condemn the move.

One person commented on the post, saying: "Surely can't be able to open without selling substantial meals. If this is allowed it will without doubt open a can of worms. If clubs can open then why not pubs?"

Another said: "Out of respect for other publicans you should stay shut".

Club owners responded to one of the comments, saying: "Please read the statement! We contacted the Council!"

Blackburn with Darwen Council said it is "awaiting urgent clarification" from government "and will provide an update as soon as possible".

Wallasey Conservative Club treasurer Charlie White, 75, said he was "happy to re-open" and "didn't agree with being locked down in the first place".

He said the Wirral club has all the Covid measures in place and is safe but that he thinks the loophole is "likely to be closed soon".

The Association of Conservative Clubs (ACC) noted the confusion on its website but said it does not consider this interpretation of the rules to be "the government's intention".

The ACC, which represents more than 800 clubs, said "the legislation could be amended in the future to close this 'loop hole'".

It is unclear whether social clubs choosing to remain closed will receive the enhanced tier three financial support packages.

The ACC said it "will be heavily pushing" for such clubs to get the enhanced support "even if the actual legislation has become muddled" about whether it had to close.

Warrington moved into tier three on Tuesday and will be followed by Nottinghamshire on Friday.