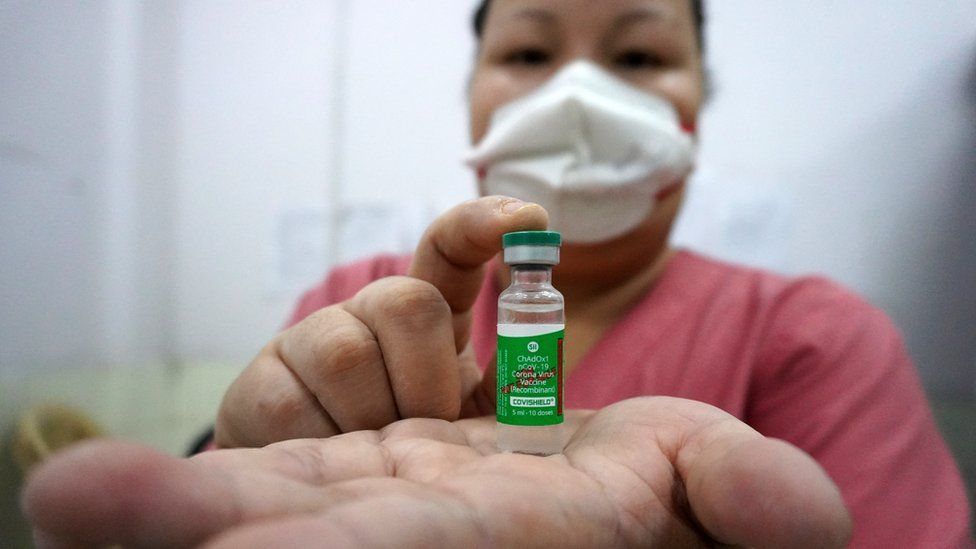 Covid: PM confident of no problem over India jab travel

Boris Johnson has said he is "very confident" there "will not prove to be a problem" for travellers who have received an Indian-made Covid jab.

It comes after reports the European Union's passport scheme does not recognise the AstraZeneca vaccine made by the Serum Institute of India.

The UK's medicines regulator has shared its data on the jab with its European counterpart, Downing Street said.

The Daily Telegraph had reported that millions of people who have received doses from batches manufactured in India could face being blocked from taking European holidays.

The UK has received five million doses of the AstraZeneca vaccine from the Serum Institute, which manufactures the jab under the name Covishield - although that name is not used in the UK.

The Serum Institute has not received approval to make the Covid jab from the European drugs regulator but has been cleared by the UK's Medicines and Healthcare products Regulatory Agency (MHRA).

However, the Department of Health and Social Care (DHSC) said all AstraZeneca vaccines administered in the UK would appear under the brand name Vaxzevria - the same as the AstraZeneca jab produced elsewhere - on the NHS Covid Pass.

It said "no Covishield jabs have been administered in the UK".

On Friday the UK recorded 27,125 new cases of coronavirus and a further 27 deaths within 28 days of a positive test.

Currently the EU is rolling out a Digital Covid Certificate so travellers can prove their vaccination status in order to be exempt from quarantining when crossing an international border.

A European Commission spokesman said that while entry to the EU should be allowed to those who are fully vaccinated with EU authorised jabs, member states could make their own decision on whether to allow entry for people vaccinated with jabs on the World Health Organization's emergency list - which includes Covishield.

Several European countries have already approved the Covishield jab for travel. These include Austria, Germany, Slovenia, Greece, the Republic of Ireland, Spain, Iceland and Switzerland.

At the moment the EU does not accept the UK's NHS app for Covid certification but a UK government spokesman said it will be "a key service" as international travel is reopened.

Individual countries including Greece and Spain do accept it.

With batch numbers being visible via the UK's Covid pass it is not clear if officials EU countries could check if a person had received a dose originating in India.

Earlier, Downing Street said the MHRA had shared its assessment of the vaccines with its European counterpart - the European Medicines Agency (EMA) - to assist the approvals process.

During a press conference with German Chancellor Angel Merkel, the UK prime minister, Mr Johnson, said he saw "no reason at all" why MHRA-approved vaccines should not be used for vaccine passports.

Mrs Merkel said that "in the foreseeable future" those with double jabs in high incidence areas, like Britain, "will be able to travel again without having to go into quarantine".

The Serum Institute is reportedly seeking emergency authorisation from Europe for the Covishield jab, which has widely been distributed in poorer countries as part of the Covavax scheme.

AstraZeneca also says it is working with the EMA on the "inclusion of Covishield as a recognised vaccine for immunisation passports" - although the EMA says there is currently no application for market authorisation.

Prof Finn, a member of the UK's Joint Committee on Vaccination and Immunisation (JCVI), told BBC Radio 4's Today programme people should not be worried that they were any less protected by the Covishield jab and said the "administrative hurdle" should be "straightened out".

"We're in the early days of this new world of needed vaccine passports and there are lots of aspects of this that are still being sorted out for the first time," he said.

"But it's clearly, ultimately not in anyone's interest, including the European Union, to create hurdles that don't need to be there."