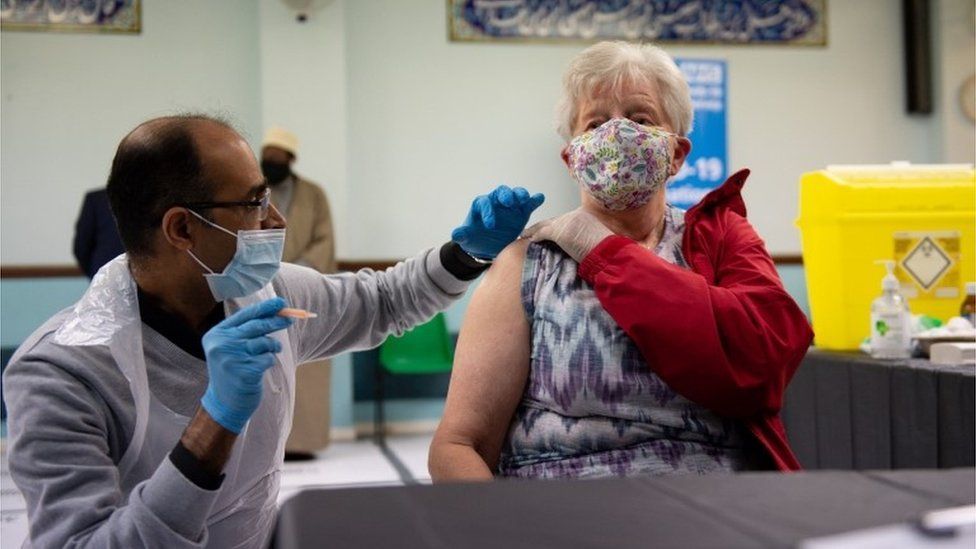 Covid: Over-70s can contact NHS for vaccine in England

People aged 70 or older in England who have not yet had their coronavirus vaccine but would like to are being asked to contact the NHS.

A national booking system can be accessed online or people can call 119 free of change between 7am and 11pm.

"Protect yourself against the clear and present danger," he said.

He said the vaccines worked very well against the "immediate threat" of the Kent variant of coronavirus circulating in the UK.

He assured the public that the South African variant - which has undergone some changes that might impact vaccines to some extent - is not the UK's most dominant variant and there was "no reason to suggest it will catch up or overtake our current virus in the next few months".

Some 147 cases of the South Africa variant have been found in the UK.

Analysis: Why scientists are confident in vaccines, despite new variants

Coronavirus is mutating and some of the new versions of the virus appear to be changing in ways that could ultimately affect existing vaccines.

That may sound worrying, but experts are confident that the current ones in use still work very well and will protect against severe illness.

Scientists have been running lots of tests and those suggest that despite the vaccines being a less than perfect match for some of the new variants, such as the South Africa one, they do plenty for what matters most - saving lives.

Findings already show the Oxford-AstraZeneca offers good protection against the Kent variant of coronavirus that is the most common variant circulating in the UK.

And data on the South Africa variant with a similar type of vccine, made by pharmaceutical company Janssen, suggest protection against severe Covid-19 is maintained.

Scientists are working to update vaccines to make sure they keep up with the virus as it continues to change.

This is something the world is very used to for flu vaccines, which can be updated every year.

Vaccines can be tweaked in a matter of weeks or months if necessary.

Doctors want to ensure everyone in an eligible group has had the chance to be immunised.

Health Secretary Matt Hancock said "we will not rest" until all of those in at risk groups have been offered the vaccine.

Until now the NHS has asked people to wait until they are contacted for vaccination to help ensure that those who are most vulnerable are protected first.

People over 70 in Scotland, Wales and Northern Ireland are being advised that they will be contacted by the NHS with an appointment.

More than 12 million people have already received a first dose and many who have not yet booked an appointment are receiving follow up letters and phone calls this week to encourage them to take up the offer of a vaccine. People can choose a time slot and location for their appointment. 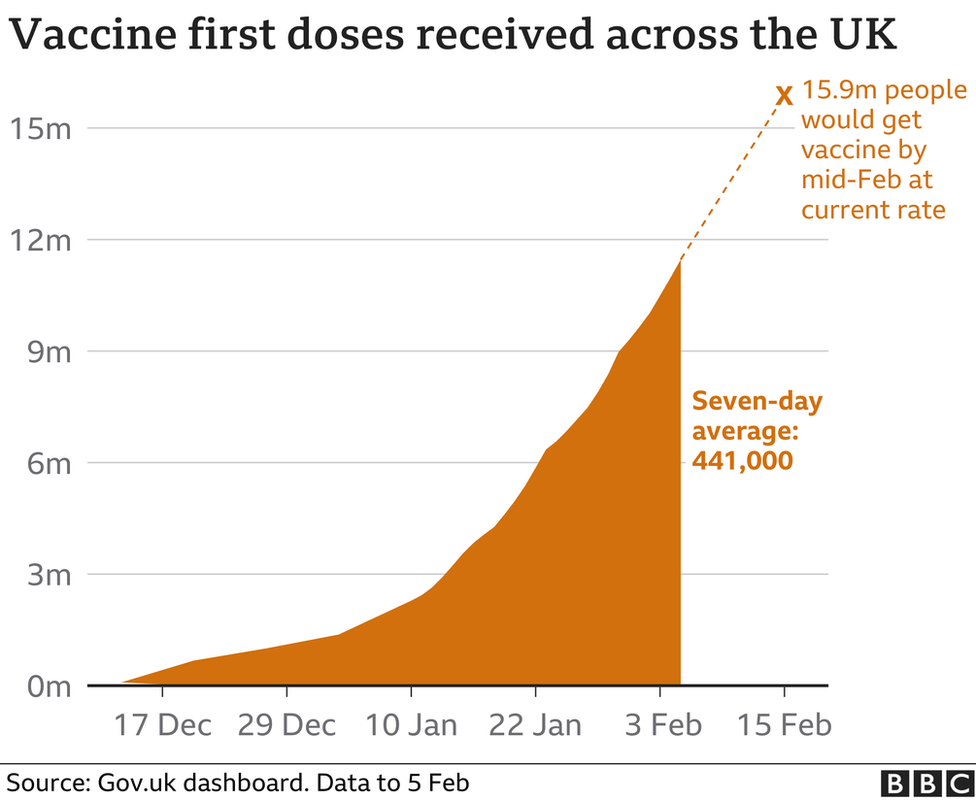 Health and social care workers, who are also among the top four priority groups for vaccination, should speak to their employer about arranging their jab if they have not yet had one.

Dr Nikki Kanani, a GP and medical director for primary care at NHS England, said: "If you are aged 70 and over, and haven't yet received your vaccine, please come forward and make an appointment as soon as you can.

"The vaccine is safe, simple, and will offer you and those around you crucial protection against this virus."

*  The government says coronavirus vaccines will be offered to everyone living in the UK free of charge, regardless of their immigration status. They want people in the country illegally to know they will not be at risk of deportation if they come forward for a jab

e government is aiming to offer first doses to 15 million people in the top four priority groups by 15 February. At the current rate, about 16 million people would receive a first jab by that date

*  Health secretary Matt Hancock said the UK's vaccination programme must keep pace with the virus. The government has a partnership with CureVac to develop new vaccines against future variants.