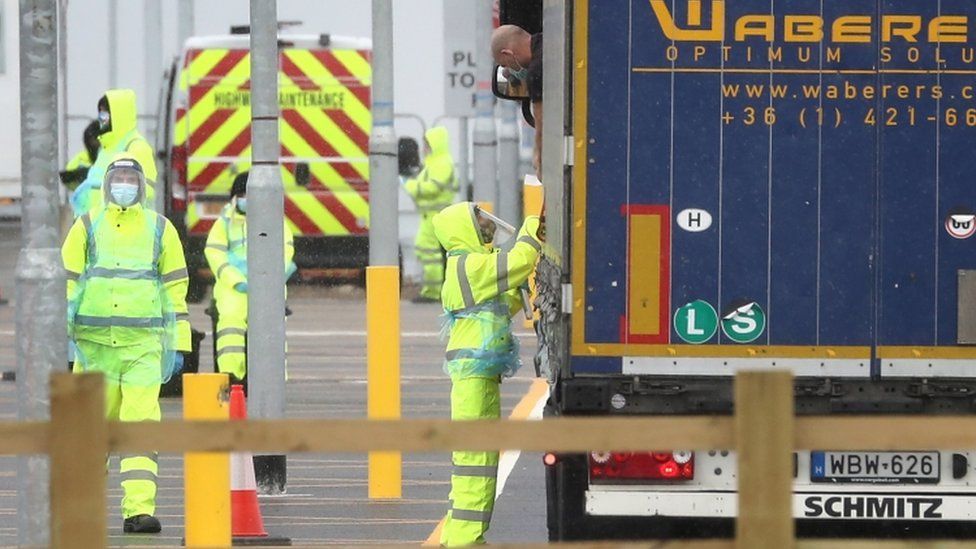 Covid: Lorry drivers arriving in England to be tested

Lorry drivers, cabin crew, prison escorts and seasonal workers entering England from outside the UK will need to take a Covid-19 test within 48 hours of arrival, the government has said.

Those remaining in the UK for longer than two days will be required to take a further test every three days.

The "bespoke testing regime" will protect the UK from the virus spread and new variants entering, said the Department of Health and Social Care.

Transport Secretary Grant Shapps wrote on Twitter earlier that the tougher measures would "ensure we keep track of any future coronavirus variants of concern".

In another tweet, he said the rule change for hauliers "is just to update" things now that France has dropped its cross-channel haulier testing.

Many parts of Europe, including France, are seeing a surge in coronavirus cases, prompting fears of a third wave in the UK.

According to the new government guidance, tests will be available through workplace testing programmes, at home and community sites, online ordering or by dialling 119.

Border security officials, aerospace engineers, Channel Tunnel workers, international rail crew and passengers and those transporting blood are also listed among those exempt from quarantine who are able to access testing.

Tests for lorry drivers will be available free at more than 40 government haulier advice sites, with fines of £2,000 for those failing to comply. All hauliers arriving in England from continental Europe will be required to complete passenger locator forms to facilitate contact while in the UK.

At an MPs' hearing last week, Prime Minister Boris Johnson was asked why France had not already been added to the "red list" of countries, from which travel to the UK is banned.