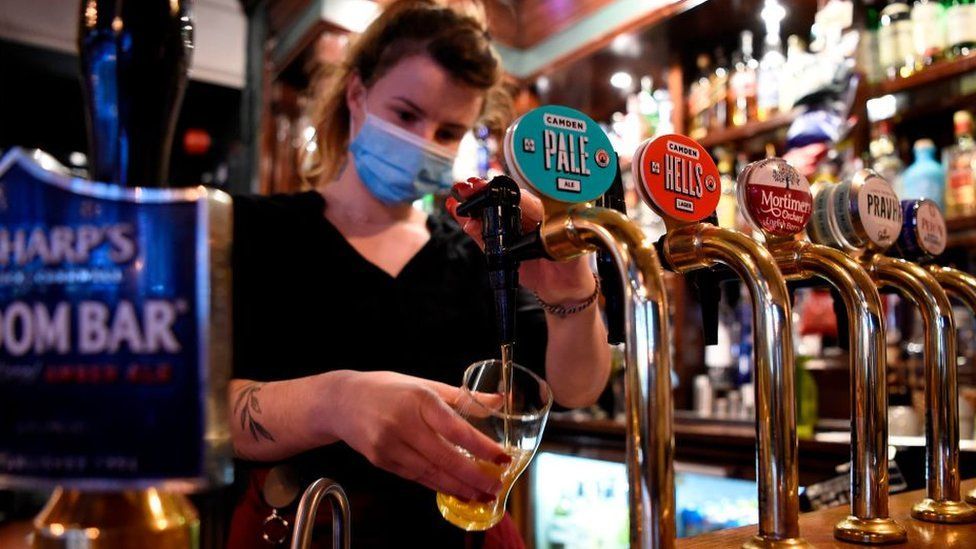 It may only be possible to introduce a vaccine passports scheme once all adults have been offered a jab, Prime Minister Boris Johnson has suggested.

He said no decisions had been made but there would be an update on the idea in April. A review will report in June.

There were "difficult issues... moral complexities, ethical problems that need to be addressed", the PM added.

Any passport could also reflect a negative test result as well as whether someone was vaccinated or has immunity.

On Thursday afternoon, MPs voted to extend emergency coronavirus powers in England for another six months, with 484 in favour, and 76 against, giving a majority of 408.

The Coronavirus Act was introduced in March 2020 at the start of the pandemic.

Meanwhile, the UK has recorded another 6,397 new infections and 63 deaths within 28 days of a positive coronavirus test, according to the government's daily figures.

Today's case numbers are up 94 on last Thursday's figure - but the number of Covid-related deaths has fallen by 32, compared with a week ago.

Meanwhile, publicans have case doubt on a suggestion from Mr Johnson that pub-goers might have to prove their vaccination status when venues reopen.

A government review into the possible use of coronavirus passports or status certificates to allow people to visit pubs and other venues is taking place under the plans to ease England's lockdown.

Mr Johnson said previous coronavirus infections could be a feature, if the certificates are adopted.

"There are three basic components. There's the vaccine, there's your immunity you might have had after you've had Covid, and there's testing - they are three things that could work together."

However he added: "No decisions have been taken at all. One thing I will make clear is none of this is obviously going to apply on April 12 when it will all be outdoors anyway."

"You might only be able to implement a thorough-going vaccination passport scheme even if you wanted such a thing in the context of when absolutely everybody had been offered a vaccine."

In the Commons, Cabinet Office minister Michael Gove, who is leading the review, told MPs: "A system that relied purely on vaccination would not be appropriate.

"What would be right was a system that ensured we could open up our economy to the maximum extent that takes into account both vaccine status but also of recent test status and indeed potentially also antibody status as well," he added.

Under government plans to ease the lockdown in England, pubs will be able to start serving customers indoors - with a size limit applied to groups - from 17 May at the earliest.

The idea of asking pub-goers to show a so-called vaccine passport or certificate was raised at Wednesday's House of Commons Liaison Committee hearing when Boris Johnson was asked whether they were "compatible with a free society such as ours".

Mr Johnson said the concept "should not be totally alien to us" - pointing out that doctors already have to have hepatitis B jabs - although he stressed such a move in future "may be up to individual publicans".

A Downing Street source earlier said the review would include looking at how people's vaccination and testing status could be stored securely and displayed on a mobile phone, and the circumstances under which such a system could apply.

Speaking on Thursday, Mr Johnson said "all sorts of things were being considered" and it was "really a bit premature" to speculate on details about how a possible vaccine passport would apply to pubs.

The boss of Young's pubs said requiring vaccine passports would be "unworkable", while Greene King and the City Pub Group also voiced their opposition to any such measure.

The chief executive of the Shepherd Neame pub chain said asking pub-goers to show vaccine passports was a "fairly poorly thought out idea" he would not be adopting.

Jonathan Neame told BBC Radio 4's Today programme: "It's absolutely fine to exclude people where there is a situation of bad behaviour or drunkenness, and that's already enshrined in law.

"But if you're going to exclude people for what they are, or what they have not done, that's a wholly different issue which does touch on discrimination, civil liberties, and in this case data protection issues."

Emma McClarkin, chief executive of the British Beer and Pub Association, said the industry was "very nervous" about the "damage" such a measure could do to it and "the future of the Great British Pub".

She told BBC News: "They're asking us to enforce this at each venue and that's impossible for some of our venues to do - particularly our smaller community pubs in rural locations." 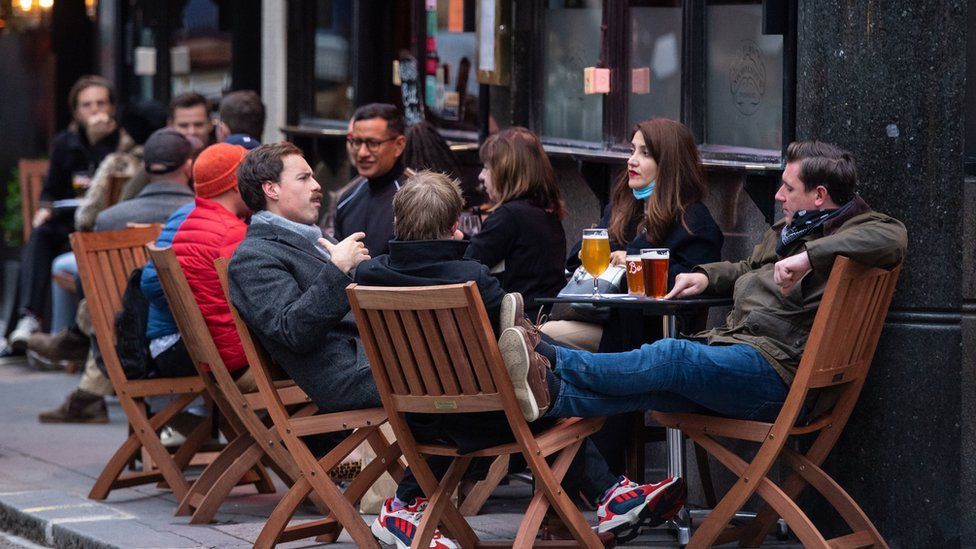 However, Peter Marks, from nightclub owner Rekom UK, said a vaccine certificate "could work" in his industry and would probably be accepted by customers already used to carrying IDs to get into venues. However, he said he was concerned introducing such a measure could delay the reopening of businesses.

Shadow business secretary Ed Miliband said Labour was "happy to look" at any government proposals for vaccine and testing certification, but he called for clarity for the hospitality industry about how the measures could work in practice.

He said the hospitality industry had been through "incredibly difficult times over the last year", adding: "And suddenly the prime minister comes along, out of the blue, to say here's a new responsibility you're going to have to deal with, without much clarity."

Senior Tory backbencher Steve Baker, deputy chairman of the Tory Covid Recovery Group, also expressed concern that businesses would be able to turn away customers "from communities which have shown an unfortunate hesitancy to take up the offer of a vaccine". 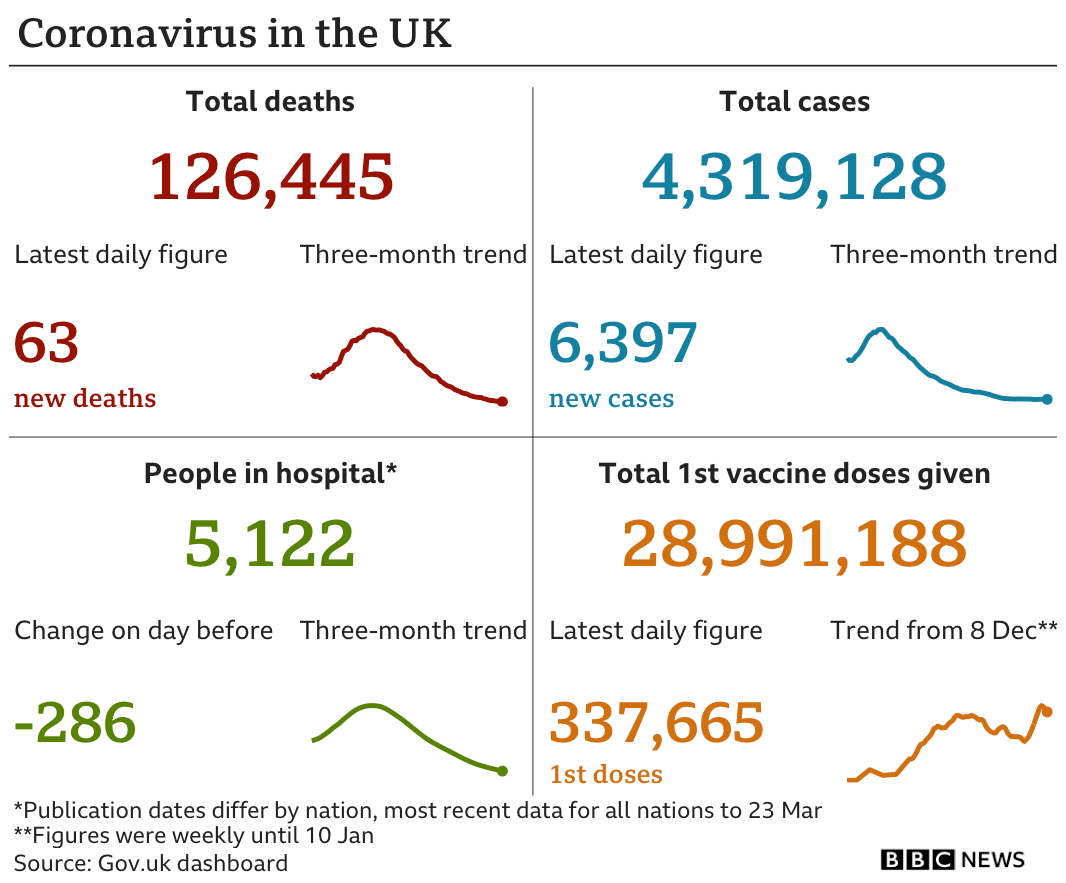