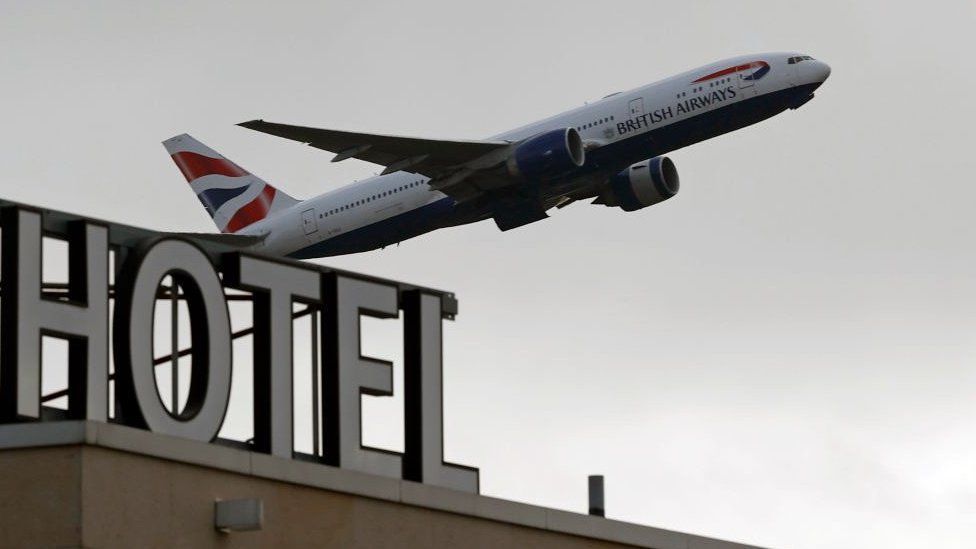 A new booking system for England's hotel quarantine scheme was taken offline minutes after it launched.

The portal, set up as part of efforts to control new Covid variants entering the country, is "undergoing work to correct a minor technical issue".

The Department of Health said the portal would be open "well before" the scheme comes into effect on Monday.

Officials are expecting to have the website back up and running by 10:00 GMT on Friday, the BBC has been told.

The requirement to quarantine in a hotel applies to British and Irish citizens, and UK residents arriving in England from 33 countries from Monday and will cost £1,750 for an individual booking.

In Scotland, residents arriving from any country by air will have to isolate in hotels.

Scottish First Minister Nicola Sturgeon wants the UK to follow Scotland and extend the rules to cover all international travellers, saying the borders will be "too leaky" otherwise.

The website had been accessible for some users intermittently since it was launched just after 13:00 GMT. The most recent holding message promised the site would be "back soon" and apologised for the inconvenience as it carried out "maintenance".

"It is extremely worrying that even the limited hotel quarantine booking system is showing signs of failing from the outset," he said.

A Department of Health spokesman said: "Rooms are available from Monday 15 February and the portal will be open well before the go live date."

Around 1,300 people a week are arriving into the UK from those countries at the moment, Transport Secretary Grant Shapps has said.

The Department of Health has arranged for about 4,700 rooms across 16 hotels to be available for the new quarantine system. Travellers have to book a place in quarantine - which lasts 10 days - before arriving in the UK.

International travel is currently banned, other than for a small number of permitted reasons, including for essential work, medical appointments and education. Holidays are not allowed.

The cost of the hotel quarantine packages is £1,750 per adult for 11 nights, which includes transport and testing.

In Scotland, the cost is the same for one adult - £1,750 - but the government is still working through the costs for extra travellers. The Scottish government is also launching a fund for people who cannot afford the charge.

Airlines and travel companies will be legally required to make sure travellers have signed up for the new measures before they depart, with fines for companies and passengers if they fail to comply, he said.

Failing to quarantine in a designated hotel when required will carry a fine of between £5,000 and £10,000.

Giving false travel history information on the mandatory passenger locator form filled in by travellers when they arrive in the UK will attract a maximum sentence of 10 years in prison.

All arrivals from countries not on the "red list" must see out a 10-day quarantine at home, but will be required to pay £210 for two additional private virus tests, booked prior to arrival.

It came as Health Secretary Matt Hancock said it was "too early" to know whether summer holidays can go ahead this year.

Mr Hancock said there was still "a lot of uncertainty" but ministers were doing everything possible to make sure people could have a holiday this year.

He told the BBC he had booked his own summer break in Cornwall "months ago". 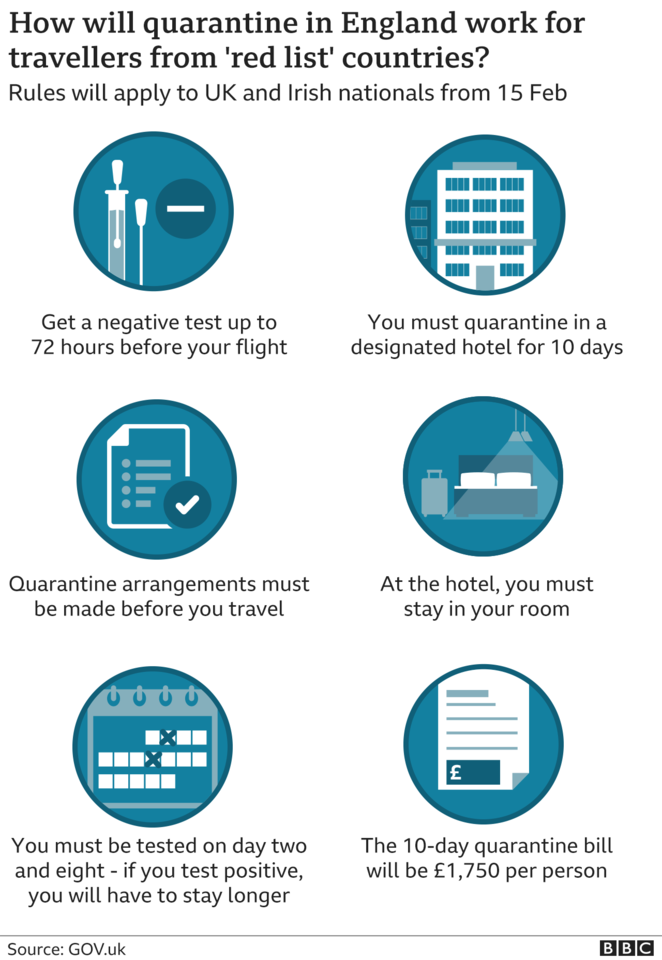 Sir Keir urged the government to "get rid of the mixed messages" about whether people should book holidays for later in the year.