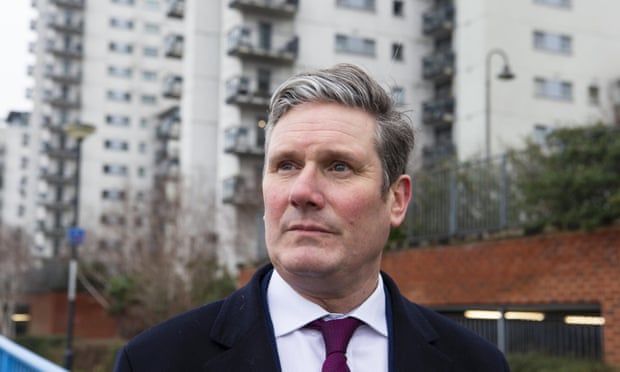 Keir Starmer will use a major speech on Thursday to claim that the coronavirus pandemic has hit the UK disproportionately hard because 10 years of Conservative rule “weakened the foundations of our society”.

The Labour leader, who has faced internal criticism in recent weeks for failing to chart a clear political course, will say Rishi Sunak’s budget next month is “a fork in the road” and should be a moment to “diagnose the condition of Britain and to start the process of putting it right”.

“We can go back to the same insecure and unequal economy that has been so cruelly exposed by the virus, or we can seize this moment and go forward to a future that is going to look utterly unlike the past,” Starmer will say.

He will argue that the aftermath of the pandemic that has claimed more than 100,000 lives, with those in poorer communities disproportionately hit, calls for a Beveridge-style reassessment of life in the UK.

“The terrible damage caused by the virus to health and prosperity has been all the worse because the foundations of our society had been weakened over a decade,” he will say. “This must now be a moment to think again about the country that we want to be. A call to arms – like the Beveridge Report was in the 1940s.” The report paved the way for the welfare state.

Boris Johnson has insisted he wants to “build back better” from the pandemic, but the Labour leader will suggest the prevarication over whether to extend the £20-a-week increase in universal credit introduced a year ago showed that the Tories were only offering “a roadmap to yesterday”.

By contrast, Starmer will say the pandemic has “shifted the axis on economic policy” and Labour would seek a new relationship between government, the public and business, with no return to “business as usual”.

“The age in which government did little but collect and distribute revenue is over. The mistakes of the last decade have made sure of that,” he will say.

“I believe people are now looking for more from their government – like they were after the second world war. They’re looking for government to help them through difficult times, to provide security and to build a better future for them and their families. They want a government that knows the value of public services, not just the price in the market.”

Starmer will argue that the Conservatives undermined the country’s resilience by cutting back public services and leaving too many people vulnerable to the pandemic because of inequality, insecure jobs and overcrowded housing.

Allies say he has been influenced by Prof Michael Marmot’s landmark work on health inequalities. Marmot was commissioned by the last Labour government to examine the underlying causes of the stark differences in healthy life expectancy across the UK.

Reviewing the impact of his work in 2019 against the backdrop of a decade of austerity, Marmot said a more progressive tax system might be necessary to tackle health inequalities. He has recently given a presentation to the shadow cabinet, according to one Labour source.

Starmer hopes his critique of the government for undermining the UK’s resilience to the pandemic will lay the groundwork for an attack on the Tories as effective as George Osborne’s claim that Gordon Brown failed to “fix the roof while the sun is shining”.

Osborne and David Cameron’s success in pinning the blame for the 2008 financial crash on what they claimed was Labour mismanagement of the public finances helped shape the debate in the 2010 general election and beyond.

Some of the Labour leader’s critics have argued that he has failed to land enough blows on Johnson for mismanaging the Covid crisis – or to link the government’s failings to a wider narrative.

As well as seeking to address that challenge, the speech, to be delivered from Labour headquarters by video-link, is also expected to set out new policies.

One frontbench colleague said the speech marked a shift away from focusing solely on Johnson’s incompetence, towards setting out a distinct political stance. “He wants to put an ideological stake in the ground,” the MP said.

The shadow cabinet office minister, Rachel Reeves, recently promised a wave of “insourcing” to undo the large-scale use of private contracts to carry out key public services, and Starmer has reaffirmed Labour’s intention of abolishing tuition fees – but some internal critics have complained that the policies are not yet part of a coherent story.
#covid  #coronavirus  #boris johnson
Add Comment