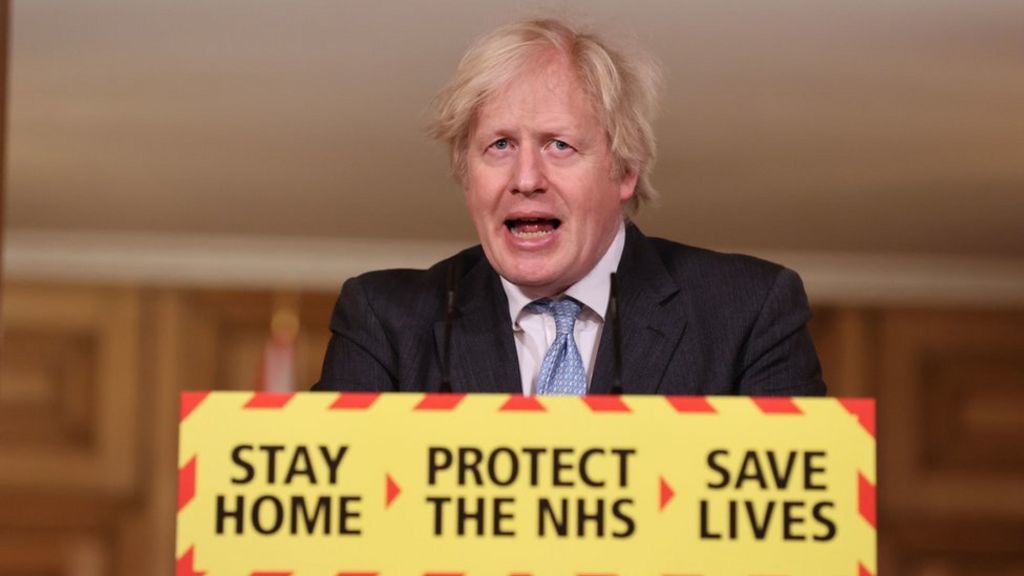 Covid: Have your jab this week, PM tells two million

Boris Johnson has urged the two million people yet to take up their offer of a Covid jab to "come forward" this week.

The UK was closing in on Monday's target for vaccinating almost 15 million of its most vulnerable people, the PM told a Downing Street briefing.

But he said some people "for one reason or another" had not been vaccinated.

Mr Johnson said the aim was not to "hit some numerical target, but to save lives... another step on the long and hard road back to normality".

The government is aiming to offer a first dose of a vaccine to 15 million people - those aged 70 and over, healthcare workers and people required to shield - by 15 February.

After the first four priority groups receive their jabs, ministers hope that people aged 50 and over, as well as those with underlying health conditions will be vaccinated by the end of April.

Mr Johnson said: "With less than a week to go until the target date... there's no doubt we've made great strides, with just over 13 million people now vaccinated in our United Kingdom, including one in four adults in England, over 90% of everyone over 75 and over 90% of eligible residents of care homes for the elderly.

"But that still leaves nearly two million people, a population roughly twice the size of Birmingham, that we still hope to reach.

"And there are people across the country who for one reason or another haven't yet taken up their offer. So now is the moment to do it."

The government is on track to meet its target to offer vaccines to 15 million people by Monday.

But the question now on everyone's lips is what difference is it making?

Given it takes two to three weeks for immunity to develop and then another few weeks for the impact of that to be seen in infection levels and hospitalisations, it is too early to tell for sure from the published data.

The government has been collecting data behind the scenes by monitoring cases in people who have been vaccinated.

It is expected to unveil that next week.

Early reports suggest it is having a significant difference - and if that is the case it will shift the dynamics of the pandemic significantly.

The latest official figures on Covid also show there have been a further 1,001 deaths reported within 28 days of a positive coronavirus test in the UK, and another 13,013 positive tests. 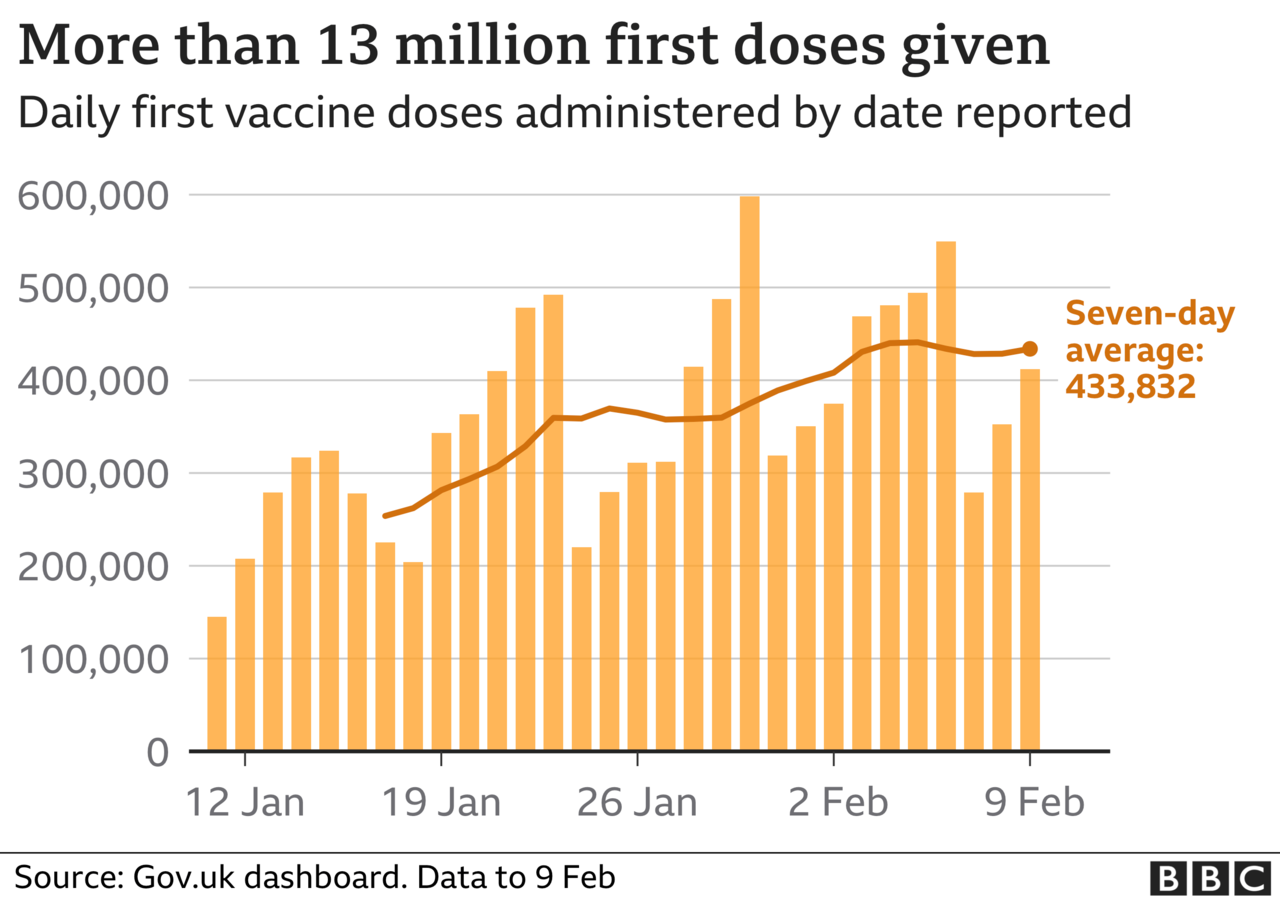 Mr Johnson acknowledged that the figures showing a reduction in Covid-19 cases were not necessarily down to the rollout of the vaccine.

The prime minister said: "I've looked at the data and scrutinised it with my layman's eye and so far, yes we are getting the numbers down, but can I see results that I think are directly attributable to the vaccine? Although I'm assured that will happen soon, I can't say that I can see them yet."

The UK's chief medical adviser Sir Patrick Vallance told the briefing there were still a "significant number of people in high-risk groups" who had not been vaccinated and the lifting of restrictions in England needed to take place with "caution."

Sir Patrick said: "Those people remain at risk and so it's important we go cautiously in opening up, in order to be able to measure the effects." 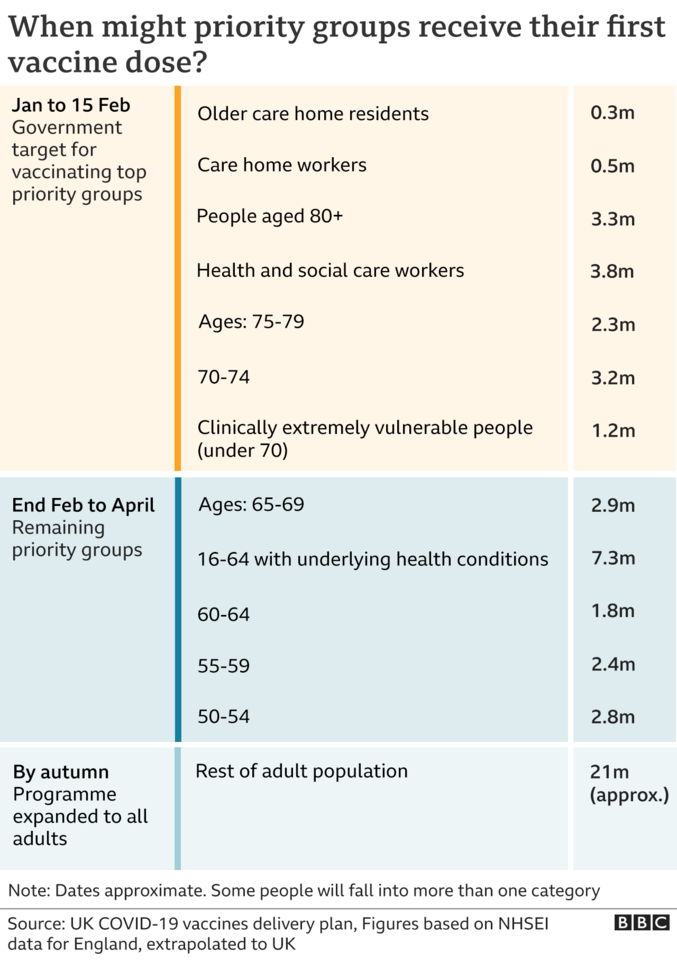 Sir Patrick was asked about Covid lateral flow tests (LFTs) as they began to be rolled out to more workplaces.

He said they were a "really important part of our toolkit", and while not as "sensitive" as a PCR lab test, were "good with picking up people with high viral load, who are most infectious", and who are asymptomatic.

Mr Johnson says LFTs will "come into their own" once the economy is starting to "unlock".

"They do have a very clear use case but it's in conjunction with everything we are doing and the priority is obviously vaccination."