Covid infection rates have increased in the UK for the first time since the middle of July, according to the Office for National Statistics (ONS).

One in 70 tested positive, with the largest rise in secondary school children in the week to 14 September.

Infections increased in England and Wales while rates fell in Scotland and Northern Ireland.

The ONS says it will closely monitor the data to see the impact of schools returning over the coming weeks.

Infections rose by 5% in the most recent period covered by the survey, although the total number testing positive is still close to its lowest point of the year.

Booster jabs are now being offered to the most vulnerable, to help protection over the winter.

The ONS estimates are based on random tests on people in households across the UK whether or not they have symptoms.

From these tests, it says approximately 927,000 people would have tested positive for Covid - 1.4% of the population - an increase from 881,200 the previous week.

There were increases in London, the West Midlands, Yorkshire and the Humber and north-east England, while rates continued to decline in the South East.

The rise was most noticeable in England in secondary school pupils as the new term started as well as in those aged between 25 and 34. In all other age groups, it was "uncertain" what the trend was.

The data marks the first increase in UK infections since the middle of July although rates are still well below spikes driven by the original Omicron variant earlier this year and two related offshoots, known as BA.4 and BA.5, in the summer. 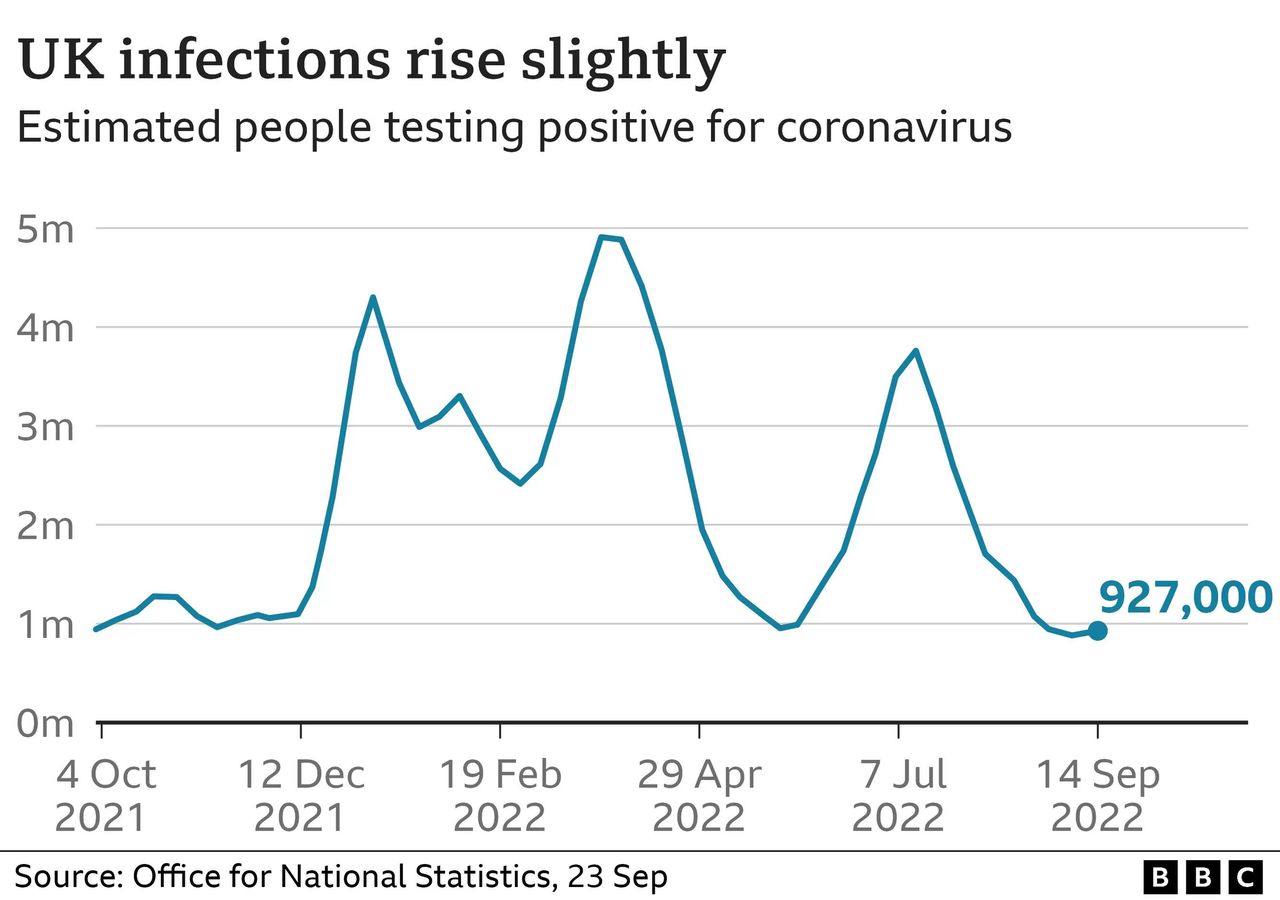 The number being admitted to hospital with Covid in England has also increased over the most recent week.

A programme to offer Covid booster jabs, along with antiviral treatments, to millions of the most vulnerable starting this month is designed to help protect those at greatest risk.

The UK has approved two dual-strain Covid vaccines which are part of that programme.

Across the UK, the ONS estimates Covid rates were:

Sarah Crofts, head of analytical outputs for the ONS's Covid-19 infection survey, said it was "a mixed picture" across the UK as infections increased in England and Wales and decreased in Scotland and Northern Ireland.

"It is too early to see if these changing trends will continue, and we will monitor the data closely to see any impact of the return of schools over the coming weeks," she said.