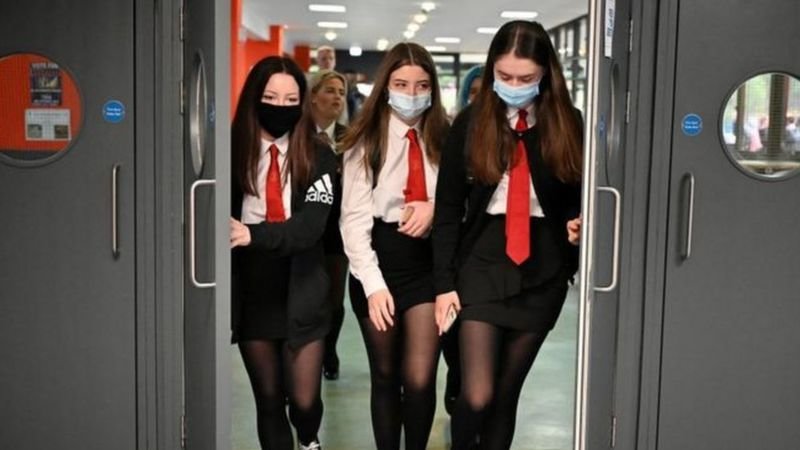 Covid: Face masks could be compulsory in Welsh secondary schools

Face coverings could become compulsory for pupils at secondary schools in Wales.

Education Minister Kirsty Williams says the Welsh Government is examining new scientific evidence about the spread of coronavirus among schoolchildren.

She has told BBC Wales they are investigating what other measures can be put in place to make schools more "Covid secure".

It included asking if there are "more opportunities" to use face masks.

Speaking to Politics Wales, Ms Williams said: "We're considering whether that, in light of this new evidence, it would be the appropriate thing to do."

Over the summer, the Welsh Government made schools and councils responsible for deciding where and when face masks should be worn in educational setting.

Opposition parties and some education unions accused ministers at the time of passing the responsibility to schools.

That was denied by Health Minister Vaughan Gething, who said a "one-size-fits-all approach" would not work in Wales.

The education minister said the latest reports from Welsh Government advisers and UK scientists still reinforces the view that children are "very unlikely" to suffer harm from Covid-19.

"But we have seen a growth in the amount of cases in the secondary school population and it does seem that those age group children do have a role in passing the virus around," said Ms Williams.

The minister said the Welsh Government is also looking at "further measures where we can reduce contacts".

Potential measures under consideration, according to government officials, include preventing children from changing in close proximity after exercise and reducing indoor group singing.

All pupils and staff in England, Scotland and Northern Ireland must wear face masks in corridors and communal areas.

Senior students and staff at schools in areas of Scotland with higher infections rates are also advised to wear masks in the classroom.

However data from the latest Office for National Statistics surveillance study shows higher levels of infection and transmission in school-based age groups than previously recognised, according to the Welsh Government's Technical Advisory Group (TAC).

It also suggests there is a higher rate of transmission without symptoms and that children are more likely to be the first case in a household.

"Time and again, we raised concerns that the virus was transmitting in secondary schools from pupil to pupil and from pupil to teacher - thereby triggering transmission in the wider community," said the Arfon MS.

"For the sake of our children's safety, the Welsh Government now needs to move quickly to adopt the latest scientific evidence from TAC and make masks mandatory in all secondary schools across Wales."

But the South Wales West MS said there needed to be "clarity" on the source of Covid infections.

"It would be pretty unfair to point the finger at older pupils and students if actually the source of the infection is outside in the community and they just happen to be bringing it in," she said.