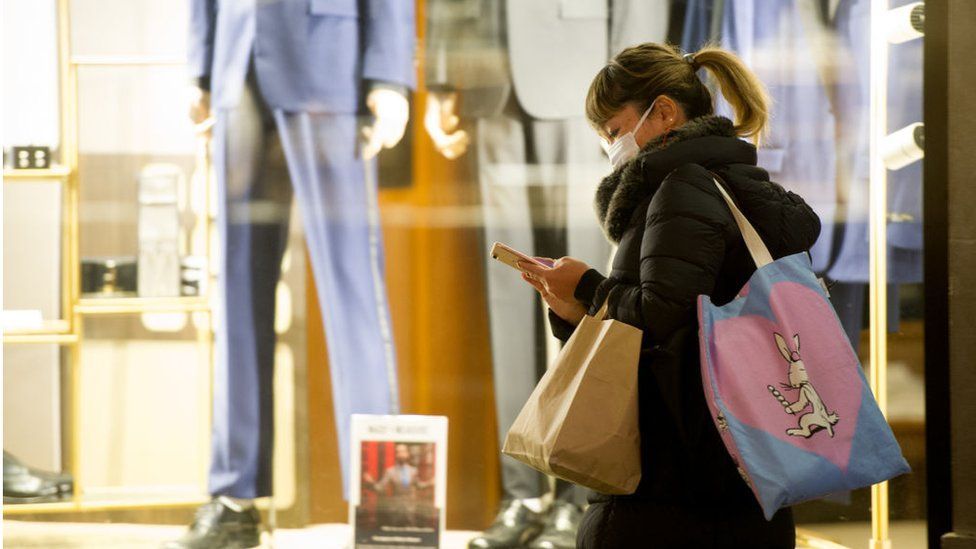 Covid: Can UK avoid a Europe-style return to lockdown?

Covid infection rates have started rising sharply in parts of Western Europe, prompting the introduction of fresh restrictions and lockdowns.

It has triggered fears the UK could follow suit. But there are plenty of reasons to believe Britain will escape the worst of what is being seen on the continent. In fact, the UK may well be in the strongest position of all to weather Covid this winter.

To understand why that could be the case, you need to look at the reasons why cases have started to take off in Western Europe.

Unlike the UK - and England in particular - many parts of Europe kept major restrictions in place for much longer.

Whereas England fully unlocked in mid-July, parts of Europe did not do this until the autumn, and in many places kept tougher restrictions in place even as they did.

Part of this was to do with timing. The UK was hit by the more infectious Alpha variant and then Delta sooner, meaning it was in a position to push ahead with unlocking before others. 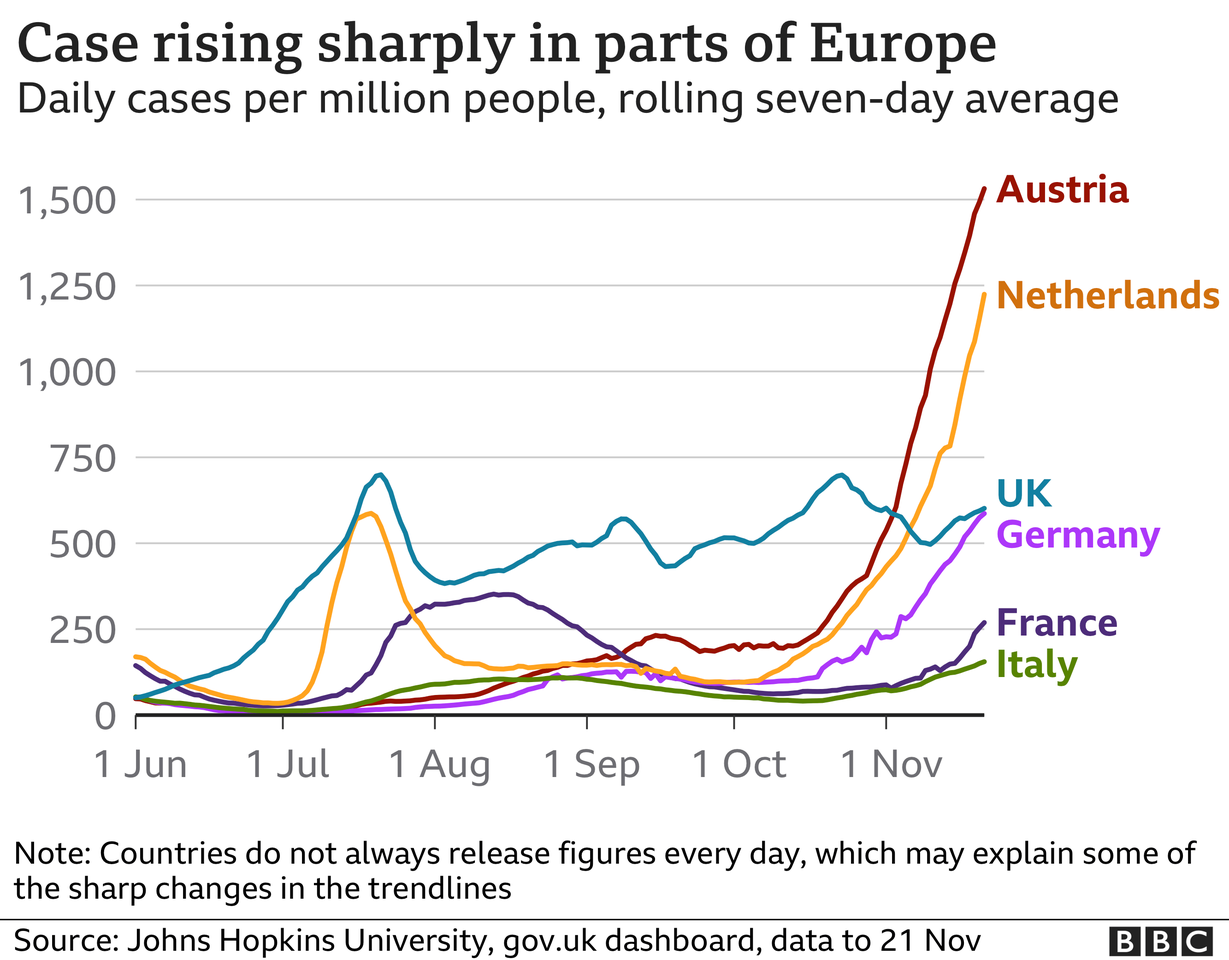 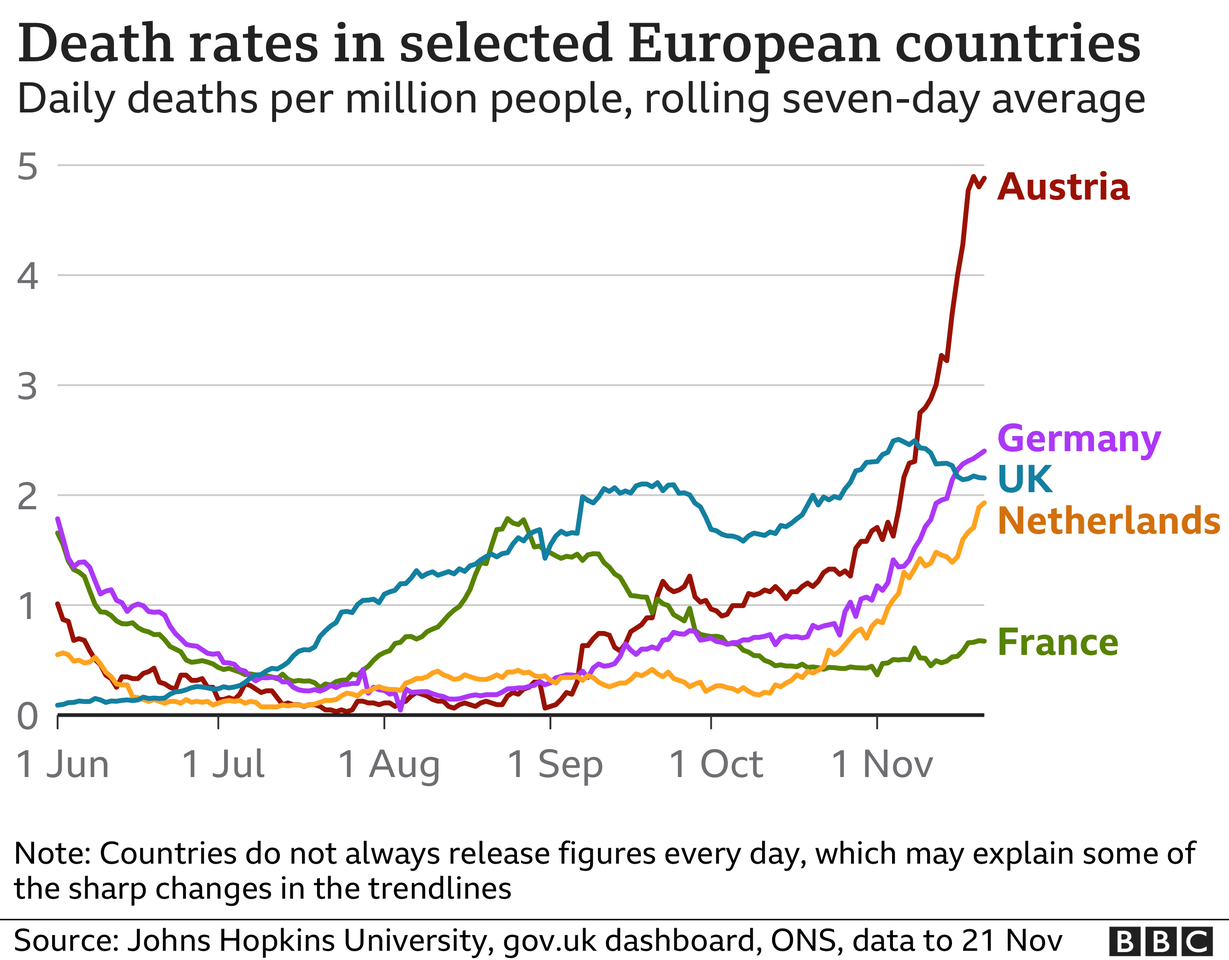 But it was also a conscious choice backed by the government's top scientists, Prof Chris Whitty and Sir Patrick Vallance.

The logic - along with the benefit of ending restrictions that themselves cause harm to health - was that it was better to have the rebound in infection, the so-called exit wave, in the summer.

It was felt the increase in the spread of the virus would be mitigated by the better weather, meaning more time spent outdoors, and would avoid the winter crunch when pressure on the health system increases across the board.

UK has high levels of immunity

The UK has, in effect, already had the wave the rest of Europe is seeing and has managed to avoid being swamped by it.

That is mainly because of the amount of immunity built up.

A combination of good vaccine rollout, particularly among the older more vulnerable groups who are the ones most at risk of serious illness, and natural immunity from infection means there is likely to be a much smaller pool of vulnerable people for the virus to infect.

Researchers at the London School of Hygiene and Tropical Medicine have been trying to quantify this by looking at what would happen if everyone was suddenly exposed to the virus in one go.

They modelled this for England - although there is nothing to suggest Scotland, Wales and Northern Ireland would be any different - and 18 other European nations.

If this hypothetical situation happened, England would have by far the fewest people ending up in hospital - 62 per 100,000 people - because of immunity built up by vaccination and infection. That compares with more than 300 in Germany, largely because of their lower levels of infection to date, and more than 800 in Romania, which has struggled to convince its public to come forward for vaccination. 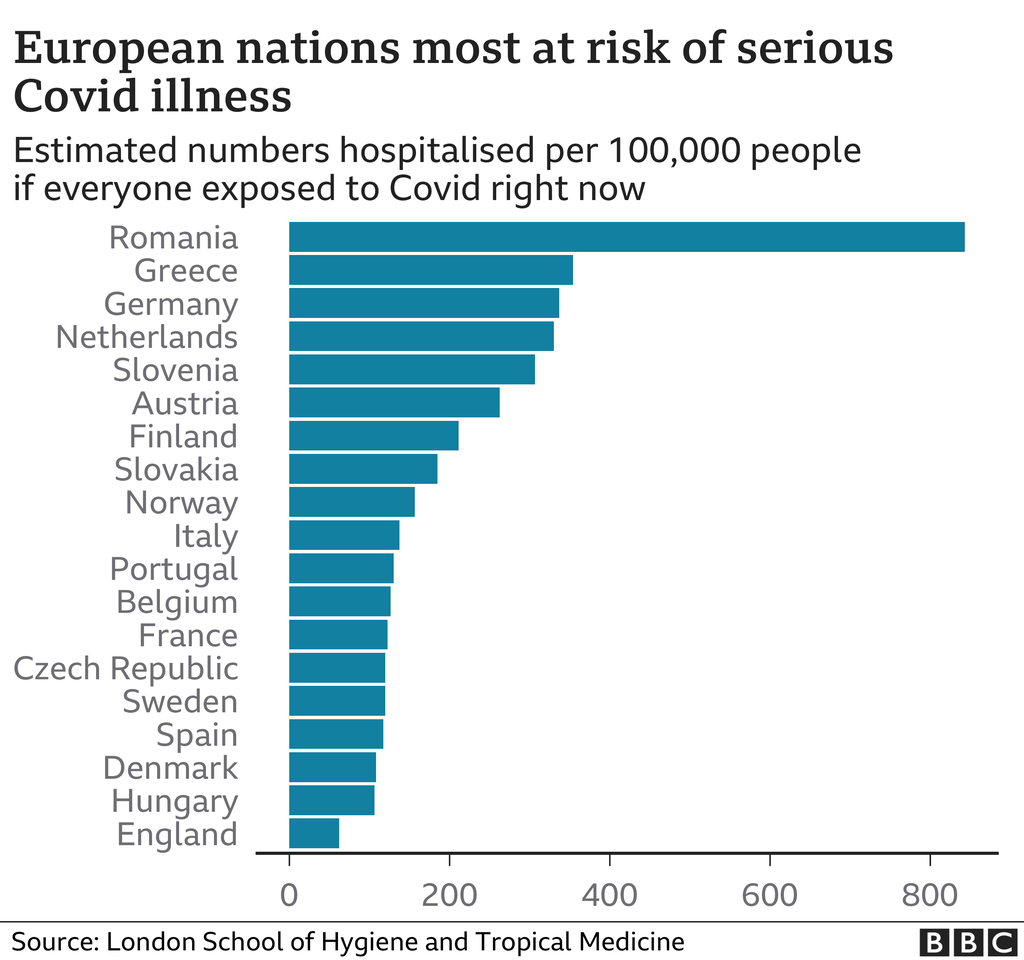 This was the picture at the end of October. If the same analysis was done at the end of November it is likely the situation would be even more favourable for England, says lead researcher Dr Lloyd Chapman.

That's because the UK is ploughing ahead faster than other nations with boosters. Again part of this is related to timing. As the UK was quicker off the mark with Covid vaccinations initially, there are greater numbers of people becoming eligible for a booster.

"We are giving those boosters to the very people who are most at risk at perhaps the best time - they will have the best protection in winter." 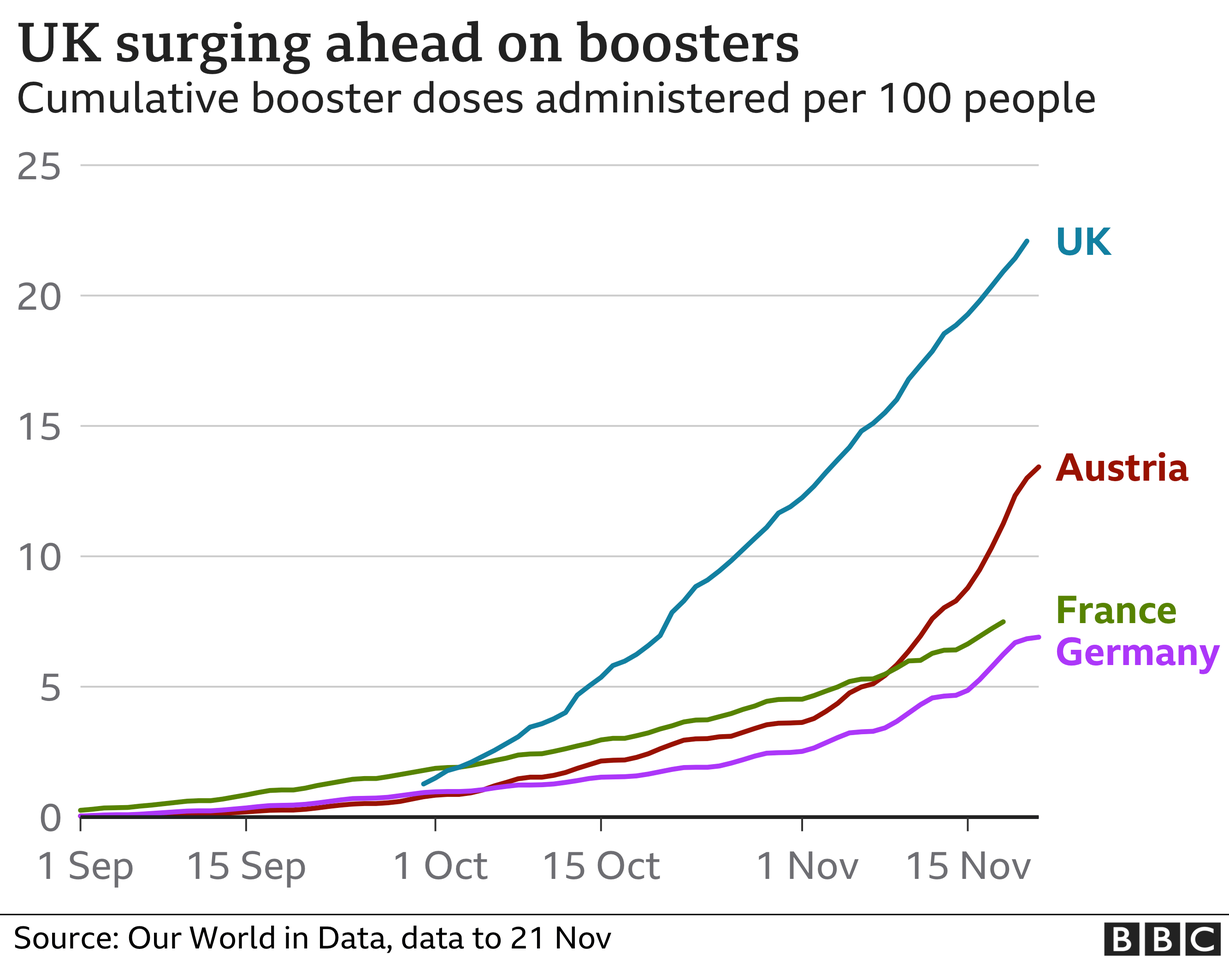 But Dr Chapman also points out this has come at a price - the high rates of infection have resulted in a greater amount of serious illness and death in recent months than many of our Western European neighbours.

And he adds the research should not be seen as a guarantee we will escape the winter without seeing a surge in cases. "We may be in the strongest position - but we could still see cases double and that would cause problems."

But is that likely? What is perhaps most remarkable about the UK is just how stable infection levels have been. Ever since the sharp rise seen in early summer peaked in mid-July, infection rates have bobbled along, small rises being followed by similar drops.

There is no other part of Europe that has seen Covid infections held so stable with very few restrictions in place.

Instead, when other nations have seen cases surge restrictions have tended to be reimposed. This is happening now in parts of Western Europe and follows on from what happened in Eastern Europe early in the autumn.

Romania, for example, saw a sharp rise in cases in September and October and reacted by introducing a night curfew, sending children home from school and introducing health passes for access to public venues.

It is telling that those nations that have had the most problems as winter arrives are the ones identified by the London School of Hygiene and Tropical Medicine as having the greatest pool of vulnerable people. How far this pattern spreads across Europe remains to be seen. 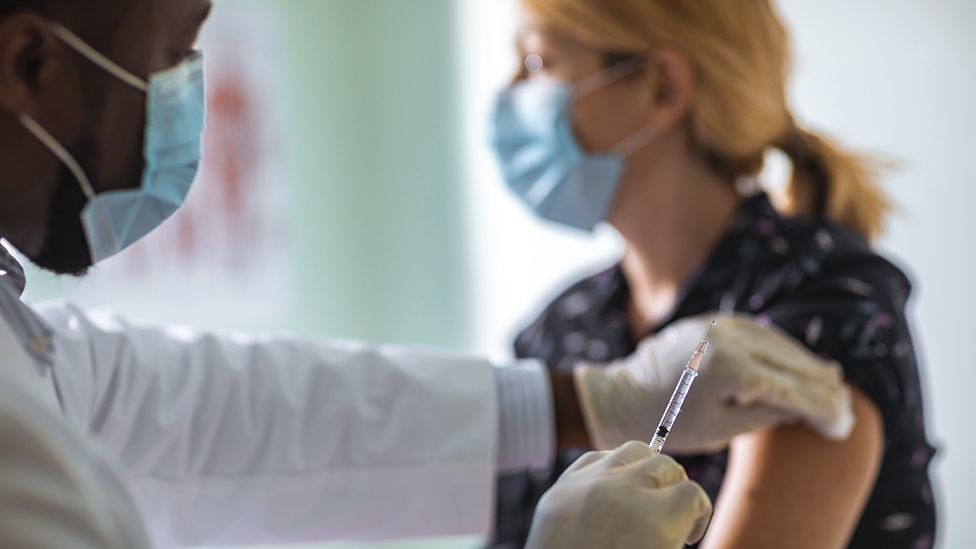 But immunity alone does not explain why the UK, and in particular England, has seen such stable rates, says Prof Graham Medley, who chairs the government's infectious disease modelling group.

Prof Medley, speaking in a personal capacity, believes it is more complex than that. "I think we are seeing the public playing an important role."

He says a combination of limiting mixing and frequent use of rapid tests, which are more easy to access here than in many other countries, seems to be doing just enough to keep the virus in check.

"The government has passed the risk management to the public - and we've been able to do that better than other countries."

The big question is whether that will last throughout winter - Scotland and Northern Ireland are already talking about the possibility of tightening of restrictions. Prof Medley says it is "delicately" balanced, but with every passing week the chances are getting better.