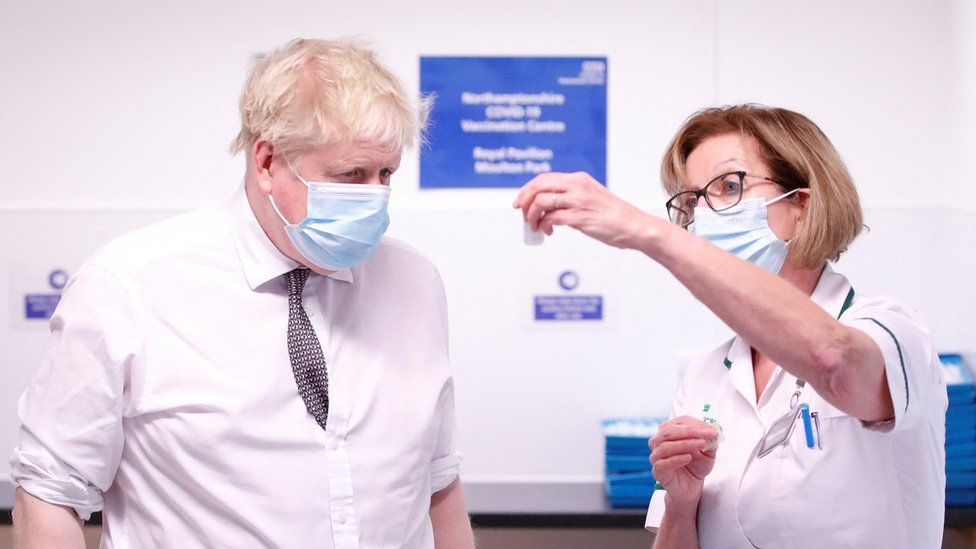 Boris Johnson has accused anti-vaccine campaigners of speaking "mumbo jumbo" when it comes to coronavirus jabs.

The prime minister said those spreading false information on social media were "totally wrong" and it was time for him "to call them out".

Some European countries are making vaccination mandatory, but Mr Johnson stressed it was important for the UK to maintain its voluntary approach.

And nearly 83% have had a second dose, while 60% have had their booster or third primary dose.

Thursday's coronavirus figures showed 179,756 new cases had been reported in the UK and 231 deaths within 28 days of a positive test.

Mr Johnson, who was speaking while on a visit to a vaccination centre in Northampton, said: "I want to say to the anti-vax campaigners, the people who are putting this mumbo jumbo on social media: they are completely wrong.

Mr Johnson said some other European nations were going for "coercion".

Italy is the latest country to make vaccination compulsory for some, with all over-50s now being told to have a jab. Austria was the first to make it a legal requirement.

The prime minister said: "What a tragedy that we've got all this pressure on the NHS, all the difficulties that our doctors and nurses are experiencing, and we've got people out there spouting complete nonsense about vaccination.

"They are totally wrong, and I think it's time that I, the government, call them out on what they're doing. It's absolutely wrong, it's totally counterproductive, and the stuff they're putting out on social media is complete mumbo jumbo."

He said some 30-40% of the 17,000 patients in hospital with Covid "haven't actually been vaccinated at all". This is "increasingly true" of those in intensive care, added Mr Johnson, as the "overwhelming majority of them have not been boosted".

People should "behave sensibly" as well as recognising "the vital importance of vaccination", he added.

The vast majority of adults in the UK have had Covid-19 vaccines - but that hasn't stopped anti-vaccine activists from continuing their crusade against jabs.

Their tactics change and evolve according to social media policies and what's in the news. They generally promote unfounded claims about the jabs relating to emotive topics. Some brandish scientific titles in a bid to play on trust in experts.

The reasons behind vaccine hesitancy vary. Some can't get a jab because of medical reasons. Others are on the fence, or don't see the personal benefit. It's only a tiny minority of the unjabbed who are ardent anti-vaxxers.

But that group is extremely active on social media, sharing posts and videos that exploit doubt and fear in order to advance their agenda.

A select few do it for money or clicks, but others are simply true believers being pulled deeper into an online movement.

In recent months, it's become clear that anti-vax activists are losing their battle. Some are trying to create their own small communities.

But a few are turning to increasingly aggressive tactics - threatening doctors, journalists and politicians online and even turning up to their houses.

Mr Johnson said while Omicron is milder than previous variants, "the pressures on hospitals are clear".

The number of hospital trusts in England to be in critical incident status amid staffing shortages and rising numbers of coronavirus cases is currently thought to be 17. A critical incident is declared when a trust is worried it might not be able to provide core priority services like emergency care.

But the prime minister said it was not true that the NHS does not have enough staff to cope with the increasing pressure - with staff numbers increasing, retired staff being called back and volunteers being used. 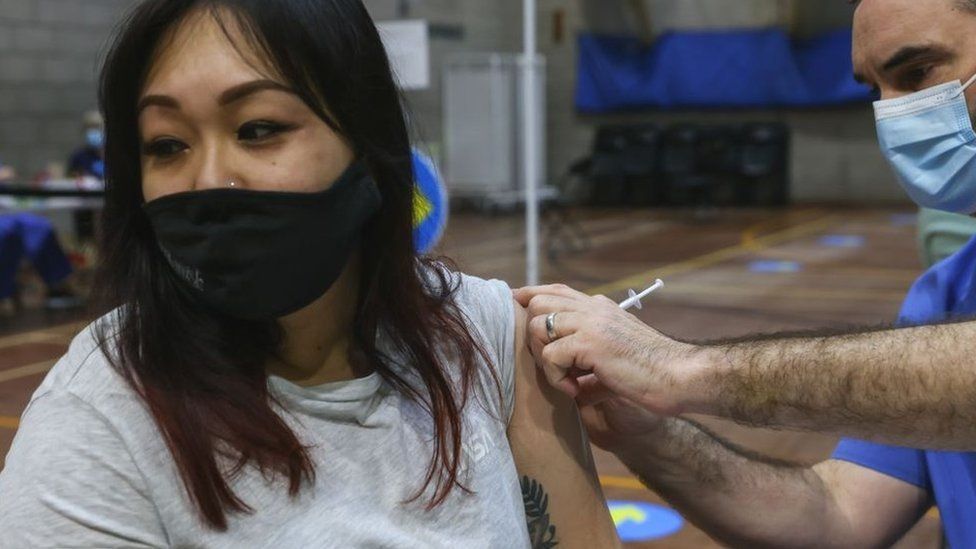 "What we've got to do is give the NHS all the help we can through the next period, with all the simplifications of systems, moving staff from one hospital to another, all the ways we can back staff up, but also make sure that the people who are likely to get ill get vaccinated first," he said.

"The saddest words in the English language are 'too late'. When you're in ICU and you haven't been vaccinated, sadly it's too late to get vaccinated, so get boosted now."

Asked about Australia's detention of men's tennis world number one Novak Djokovic, amid a row over his vaccination status, Mr Johnson said he shares the view that it is a "very good idea to get vaccinated".

But he said the decision to detain the tennis player was a "matter for Australia".

Figures released by NHS England on Thursday suggest fewer than half of all adults in some of England's biggest cities have had a booster or third dose of a Covid vaccine.

The figures, for vaccinations given up to 2 January, suggest Newham in London has the lowest rate of take-up for boosters and third doses out of all English local authorities, with 38.5% of all adults having had the extra jab. The Gloucestershire Cotswolds area is estimated to have the highest rate, at 83%.