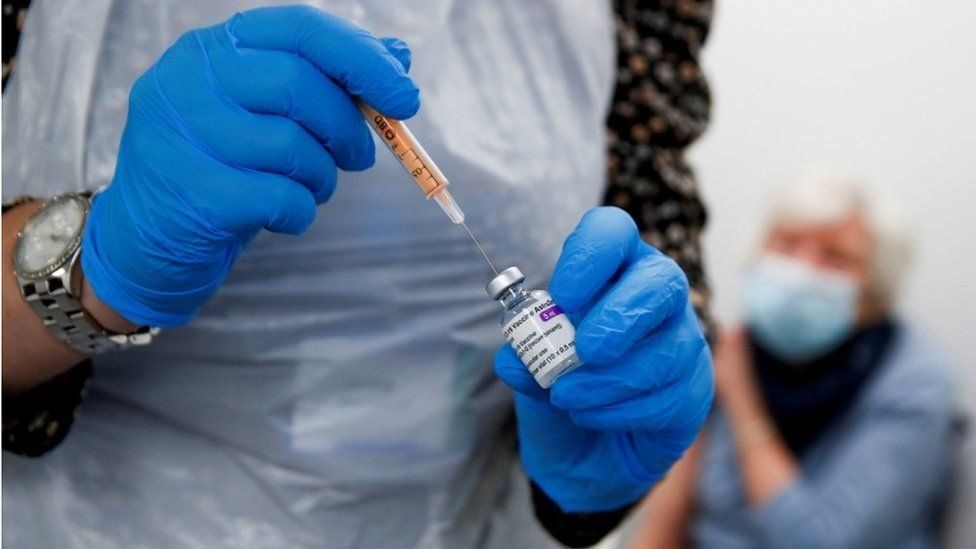 Vaccine appointments for a limited number of people aged between 35 and 39-years-old are being made available from Monday.

The Department of Health said it is the latest phase of the vaccine roll out.

It said bookings will open to the entire 35-39 age group by the end of April.

The slots are mainly for the SSE Arena vaccine centre in Belfast and can be booked on a first come first served basis from 14:00 BST.

Appointments in community pharmacies will be made available to 35-39 year olds later this month depending on vaccine supplies.

At the start, the aim was for about 10%. She said across pharmacies it had been a "military operation".

However she said vaccine supply had been more limited in April than expected or wished.

"We have had to adjust our programme accordingly," she said.

The over-35s are being offered the vaccine because of uptake among the over-40s.

"We know we have vaccinated many of them - over 120,000 - but what we have always found is that the enthusiasts come through pretty immediately, hovering over the booking line and others take a bit longer so we know those tend to be strung out over the number of weeks," she said.

She said each cohort had had a similar pattern.

Health Minister Robin Swann said: "I have always been clear that we would move through the vaccine programme as quickly as vaccine deliveries and capacity allows as recommended by JCVI (Joint Committee on Vaccination and Immunisation).

"I recently announced that we successfully administered over one million vaccines across Northern Ireland to the highest priority groups.

"This figure is expected to rise exponentially as the Trust vaccine centres and GP practices continue to deliver second doses while the vaccine centre at the SSE Arena and the community pharmacists push ahead to deliver first doses.

"Opening up to 35-39 year olds earlier than expected is a testament to the hard work and dedication of all staff who are delivering the vaccination programme in Northern Ireland.

"I encourage those who are eligible to seize this opportunity and take up the offer of vaccination."

The minister has also urged those aged between 40 and 45, who were recently added to the eligibility list, to book their vaccine appointment.

He added: "Getting the vaccine not only protects you but also those close to you.

"I would also strongly encourage anyone aged 40 years or over who hasn't booked themselves a vaccination appointment yet to do so as soon as possible."

Meanwhile, the Department of Health also said that in line with recent advice from the JCVI, people living in the same house as someone who is severely immunosuppressed will be able to access the vaccine programme shortly, once their household has received a letter from their GP.

Appointments at this stage are limited and the department is asking for patience.