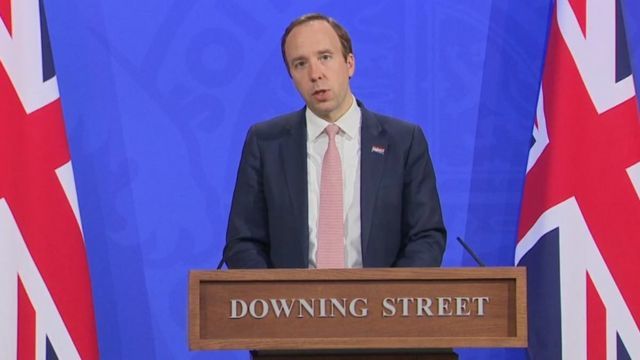 Covid-19: Up to 75% of new UK cases could be Indian variant - Matt Hancock

Up to three quarters of new UK Covid cases could be of the Indian variant, Health Secretary Matt Hancock has said.

Public Health England data shows cases of the variant have risen by 3,535 to 6,959 since last week.

Mr Hancock told a Downing Street briefing that the government had always expected cases to rise as restrictions were eased.

But he said it was "critical" to monitor the link between cases and hospitalisations.

On Thursday, a further 3,542 coronavirus cases and 10 deaths within 28 days of a positive test were reported in the UK.

It is the second day in a row the number of new Covid cases has topped 3,000 - the first time infections have reached this level since mid-April.

Over the last seven days, cases are up 20.5% compared with the week before.

Mr Hancock told the briefing on Thursday: "The latest estimates are that more than half and potentially as many as three-quarters of all new cases are now of this variant.

"As we set out our roadmap we always expected cases to rise - we must remain vigilant."

Mr Hancock said the increase in cases was still focused in hotspots.

The PHE data found the worst-affected areas continue to be Bolton, Bedford, and Blackburn with Darwen, which have seen 1,354, 366 and 361 confirmed cases, respectively.

PHE added, however, that there are small numbers of cases of the variant in most parts of the country.

But the health secretary said there were "early signs" rates in Bolton are starting to "cap out".

If surge testing and vaccinations are effective against the Indian variant in Bolton, this could be used as a model to prevent local lockdowns, he said.

Mr Hancock said vaccines were "severing the link between cases and hospitalisations and deaths from coronavirus".

But he urged people to get both doses, saying that of the 49 people in hospital with Covid in Bolton only five had received two vaccinations.

Dr Jenny Harries, chief executive of the UK Health Security Agency, told the briefing that many of the outbreaks were centred on "focal points", such as community centres, schools or faith buildings.

She added: "The cases actually do look as though they are starting to plateau out but the spill-over into community transmission in local areas is an important one."

She said it was "on the cusp at the moment" over whether rising cases reflected the variant taking off or whether there was a rise because more cases were being hunted for and detected by public health experts.

Increasing cases numbers were not "generally translating into increased cases of hospitalisation and definitely not into deaths," she said.

"So the key message there is... if we can hold it while the vaccination programme gets rolled out, we stand a much better chance of getting through this session."

The Indian variant is clearly becoming dominant in the UK, replacing the Kent variant that caused the deadly winter surge.

The figures quoted by the health secretary are skewed by the fact that the testing of positive cases for variants is heavily targeted towards areas where the variant is known to be spreading.

The bigger question, though, is to what extent the rise of this variant matters.

Overall, cases are going up - but this was expected at this stage of the easing because of the green light for indoor mixing.

A more infectious variant - as this one seems to be - will put even more upward pressure on infections.

So it comes down to two things - how much more infectious it is, and to what extent the vaccination programme has weakened the link between cases and hospitalisations - given over half of adults are still waiting for their second dose and a quarter have not had their first.

A very rapid surge in infections has the potential to cause real problems as it will allow the virus to find those that are still at risk.

There are plenty of reasons to hope that will not happen given how well advanced the vaccine programme is, how low infection levels are (we have one of lowest rates in Europe) and the arrival of warmer weather which should mean more time outdoors.

But as always with this virus nothing can be taken for granted.

It comes after Prime Minister Boris Johnson said England "may need to wait" for the lifting of all Covid restrictions, which is currently planned for 21 June.

The PM said he saw nothing "currently in the data" to suggest the government would have to delay unlocking.

But he added there were signs of an increase in the number of cases of the Indian variant.

Mr Johnson said it was important to understand to what extent the vaccine programme "interrupts the link" between infection, hospitalisation, serious illness and death.

Government scientists had always made clear that infection levels would increase as restrictions eased, particularly the resumption of indoor mixing.

But epidemiologist Prof Neil Ferguson, whose modelling was crucial to the decision to go into the first lockdown in March 2020, said the Indian variant meant the reopening of society was now "in the balance".

He told the BBC: "The key issue as to whether we can go forward is: will the surge caused by the Indian variant... be more than has been already planned into the relaxation measures?"

On 21 June, the government hopes to move to the final stage of its roadmap for lifting lockdown.

Step four would see all legal limits on social contact removed, nightclubs would reopen, and restrictions on large events and performances would be lifted.

Scientists advising the government are currently studying all relevant data since the last set of lockdown relaxations on 17 May.