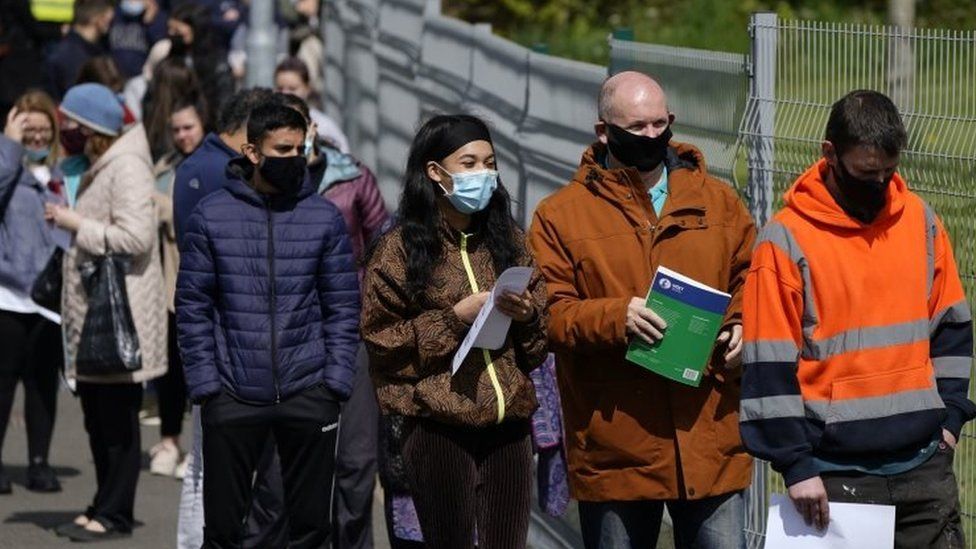 There is "nothing conclusive" in the data that means England "would have to deviate from the roadmap" out of lockdown, Boris Johnson has said.

The government plans to end remaining legal limits on social contact from 21 June, but there is increasing concern about the Indian variant.

The situation, including data from hotspots such as Bolton, was "under close review", the prime minister said.

Ministers will "let people know in a few days' time" after data is studied.

Speaking on a visit to a vaccination centre in London, Mr Johnson continued to urge people to be cautious.

He said the situation with the Indian variant was "under very careful, close review", saying: "We're looking at all the data as it comes in from places like Bolton, Blackburn, Bedford, Sefton."

Mr Johnson said they were trying to understand if the Indian variant was more transmissible and "to what extent our vaccine programme has sufficiently fortified us".

"We've got a few more days of looking at that data," he said.

It comes as the UK recorded another seven deaths within 28 days of a positive test and 2,412 new cases.

On Monday the government said 86 local councils in England had five or more cases of the variant first discovered in India, which is thought to be more transmissible.

In Bolton, a new vaccine centre has opened up and ministers have been stepping up calls for people to book vaccinations as soon as they are offered appointments.

Elsewhere, regional public health directors are concerned about rising cases of the variant in London. Cases have spread across a number of boroughs, although currently most are linked to foreign travel. 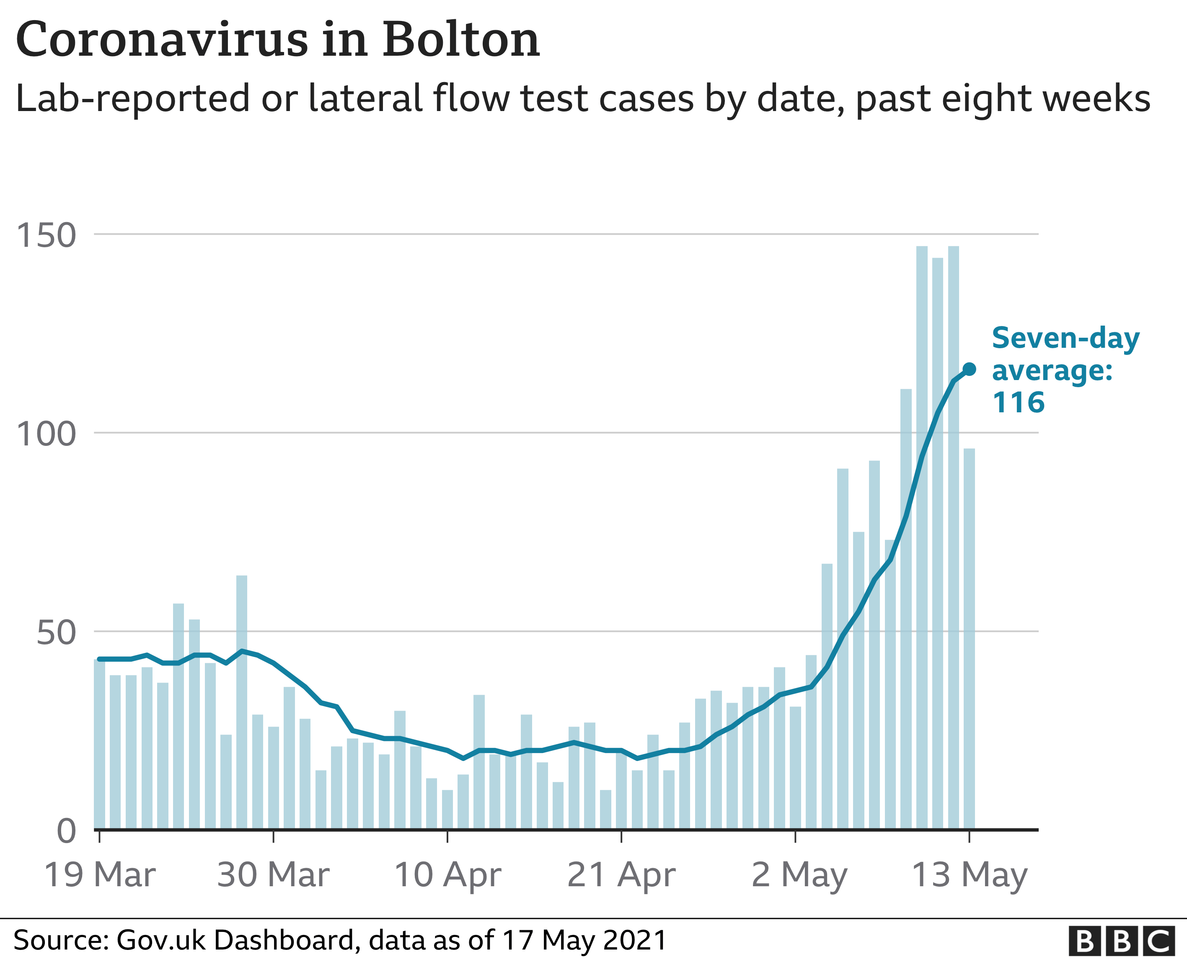 The prime minister's official spokesman said that while the government was not ruling out measures such as local lockdowns at this stage, it was "too early to speculate" on what future measures it may need to take.

Asked if a decision was expected sooner than 14 June on progressing to the final step of England's roadmap, the spokesman said that in relation to certification and social distancing, ministers "do want to update pubs and businesses, if possible, before 14 June".

But he added they needed to "allow the experts to do their work" and "couldn't be more specific on timings".

Day by day the scientists are learning more about the Indian variant - and the implications for the UK.

On Friday it was reported the variant could be 50% more transmissible than the UK variant, which was responsible for the deadly winter wave.

But confidence in that figure was always a little shaky. In the past few days there are some tentative signs its advantage over the UK variant may not be so great.

That's important. There's estimated to be an eight-fold difference between the impact in terms of hospital admissions a variant with a 20% advantage will have compared to one with a 50% advantage.

That clearly has a major implication for what restrictions are needed while the vaccination programme continues to be rolled out.

The next significant update is expected on Thursday. It will be too soon for a definitive answer, but it should help us understand more about what the variant means for the UK.

The government has already warned its next review of social distancing rules - set to take place by the end of May - may be delayed because of concern over the variant.

On Monday millions of people were able to enjoy new freedoms - such as drinking indoors in pubs, hugs with loved ones and foreign holidays - for the first time in months, under the latest relaxation of rules across England, Wales and most of Scotland. 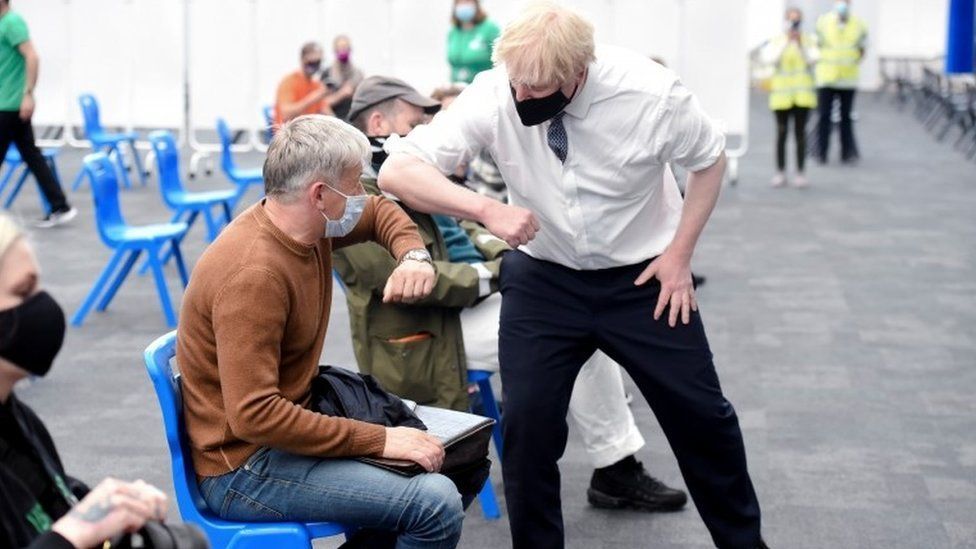 However, Labour has accused the government of "giving out conflicting and confused advice" about travel to countries on the amber travel list, where people must quarantine for up to 10 days on their return to the UK.

But earlier Environment Secretary George Eustice suggested in a BBC interview that people could travel to such destinations if they "feel the need" to visit family or friends.

Asked about the issue, Mr Johnson said it was "very important people grasp what the amber list is - not somewhere to go on holiday".

He said travellers should only go to these countries for "pressing family or business reasons". Those who break their self-isolation period on returning to the UK from these destinations face £10,000 fines, he added.

Yvette Cooper, who chairs the Commons Home Affairs Committee, said the current traffic light system was "very messy" and "clearly isn't working", adding that it should be linked to legal restrictions.

"We all seem to be in a position where the government has opened up to summer holiday travel by accident, by making it possible, but at the same time, a day later, saying 'no, people should not be travelling to amber countries,'" the Labour MP told BBC Radio 4's World at One programme. 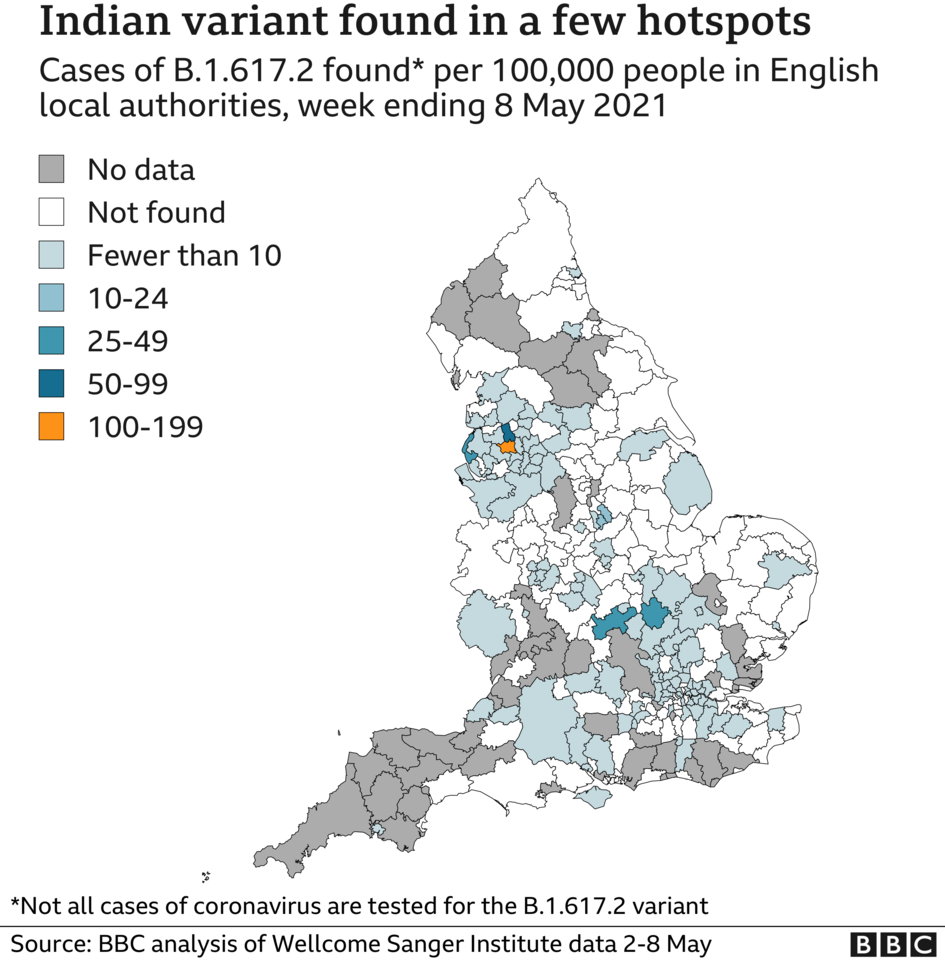 Meanwhile, Prof Andrew Pollard, director of the Oxford Vaccine Group, which developed the AstraZeneca vaccine, has said it feels "morally wrong" that children in some richer countries are being offered a Covid-19 jab before some high-risk people in poorer countries.

He told the All Party Parliamentary Group on coronavirus: "There are many unvaccinated people in the world whilst people whose risk is extremely low are being vaccinated, including children who have near to zero the risk of severe disease or death.

"That inequity is absolutely plain to see at this moment in a very troubling way."