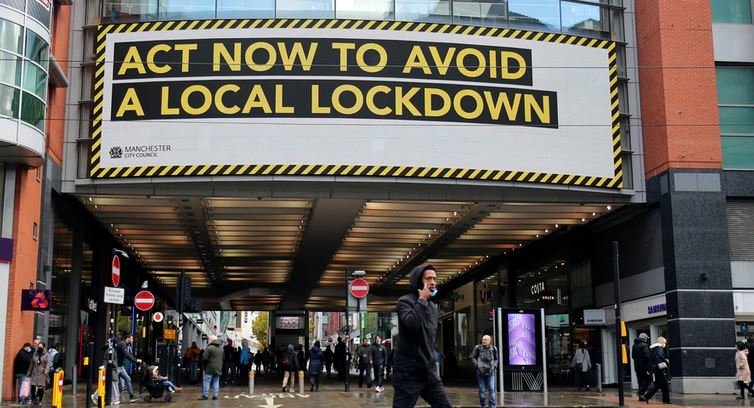 Some top scientists in Britain are calling on Prime Minister Boris Johnson's ruling Conservative government to shift strategy on the coronavirus pandemic and adopt a "herd immunity" approach, allowing people who are less likely to become seriously ill from the virus to return to normal life.

"The most compassionate approach that balances the risks and benefits of reaching herd immunity is to allow those who are at minimal risk of death to live their lives normally to build up immunity to coronavirus through natural infection, while better protecting those who are at highest risk. We call this focused protection," the scientists said in a petition known as the Great Barrington Declaration.

The intervention by scientists from several universities, including the universities of Oxford and Cambridge, comes as surging coronavirus infection rates have put Britain on the brink of tougher lockdown measures. The government's scientific advisers are calling for "urgent and drastic action."

Infection rates have doubled in the past 11 days.

On Tuesday, Britain recorded 14,542 new confirmed cases. Hot spots are popping up across the country, although most are concentrated in the north, where 16 million people are already under partial lockdown.

The authors and co-signers of the Great Barrington Declaration, named after the Massachusetts town in the United States where it was first drafted and signed in 2020, argue that pandemic lockdowns are having "devastating effects" on public health by upending routine health care and harming mental health.

They warn that tighter restrictions and lockdowns will lead to greater mortality. Professors Martin Kulldorff of Harvard University, Sunetra Gupta of Oxford University and Jay Bhattacharya of Stanford University drafted the declaration.

Many of Britain's scientific advisers say a herd immunity strategy would be "grotesque" and amount to writing off sick and disabled people. Other critics say it was the approach the Johnson government tried earlier this year, and that it led to more deaths than necessary.

The theory of herd immunity is based on the idea that once about 60% of the population has been infected, it becomes immune from further reinfection. That, in turn, provides some protection to those who are not immune because the virus will spread much more slowly or may just disappear.

Most of the government's advisers dismiss herd immunity as a viable strategy, arguing that immunity is only short-term.

Rupert Beale, a clinician scientist group leader at the London-based Francis Crick Institute, said herd immunity is unlikely to kick in before vaccines are ready. He also maintained that it is impossible to know who is likely to become seriously ill from the virus.

Many government advisers are now urging a national lockdown aimed at lowering the infection rate and avoiding hospitals becoming overwhelmed with the sick.

Professor Calum Semple of the University of Liverpool and a member of the government's main scientific advisory group on the pandemic, told the BBC on Wednesday that a "circuit-breaker" national lockdown was long overdue.

Another government adviser, Professor John Edmunds of the London School of Hygiene & Tropical Medicine, said Wednesday that localized measures are failing, and much more stringent lockdown restrictions are needed.

"These local restrictions that have been put in place in much of the north of England really haven't been very effective," he said.

The infighting among scientists comes as mayors of towns in the north of England have started to question the orthodoxy of lockdowns, fearing that tighter and prolonged shutdowns are causing irreparable damage to their local economies, as well as having a long-term impact on mental health.

Local leaders say they are better placed to know when and how to tighten restrictions, or whether they are needed at all. They fear central governments are not getting the right balance between protecting lives and saving livelihoods and businesses.

The signatories of the declaration also argue that lockdowns are having a series of negative impacts. They point to lower childhood vaccination rates, worsening cardiovascular disease outcomes and fewer cancer screenings that they say are affecting working-class people and young people the most.

Hospital admissions in England jumped by a quarter in one day this week, and worries are mounting about the ability of the National Health Service to cope as winter sets in. The government's testing system is also straining to cope with people wanting tests and complaining that they are unable to get them.

Further delays are likely, as it emerged this week that there are supply shortages from the diagnostics company Roche because of logjams in the supply chains of swabs, screening kits and reagents, the chemicals needed for the tests.

The infighting among scientists is also being mirrored among Johnson's cabinet ministers. Liz Truss, secretary of state for international trade, is publicly arguing against further lockdown measures, saying it would "set us back hugely."