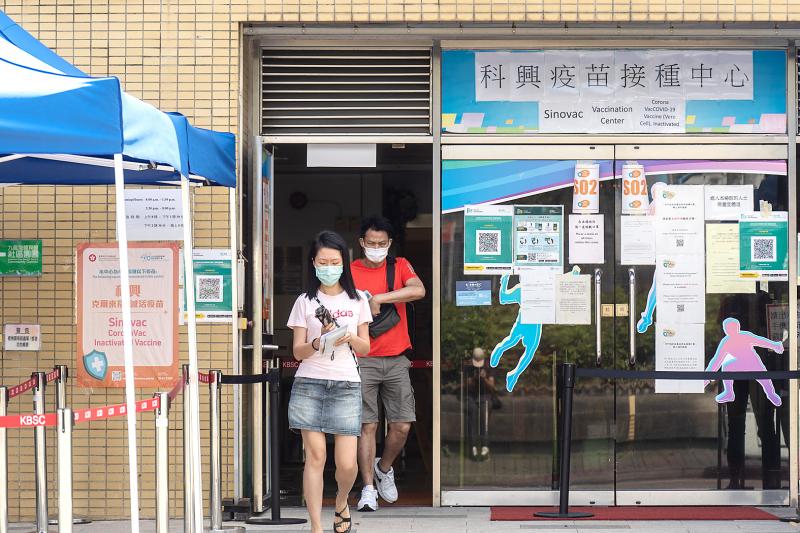 ALL ADULTS COVERED: Vaccine hesitancy and mistrust caused the rate of immunization to languish at about 10 percent, despite adequate supplies, an expert said

Hong Kong saw a jump in bookings for COVID-19 vaccine appointments after eligibility was widened to all residents aged 16 and older, as the territory works to boost inoculation rates seen as crucial to achieving herd immunity.

About 25,200 people reserved slots for BioNTech vaccinations at community centers in the 24 hours to 8pm on Friday, while another 6,100 booked appointments to receive shots made by China’s Sinovac Biotech, the government said.

Total bookings, which include first and second doses, more than doubled from 14,700 a day earlier.

The figures do not include private clinics, which offer Sinovac jabs.

The expansion, announced earlier this month, means all Hong Kong adults can access vaccines, amid a rollout effort that has been hampered in part by distrust in the local government and questions about the efficacy of Chinese vaccines. Hong Kong is one of the first places globally to roll out vaccinations to its full adult population.

About 409,400 people received the first dose of the BioNTech vaccine as of Friday, surpassing those for Sinovac. The BioNTech program was temporarily halted last month when packaging defects were found in some vials.

Still, only about 10.7 percent of the Hong Kong population has received at least one dose of a vaccine, according to Bloomberg’s COVID-19 Vaccine Tracker — less than half the rate of inoculations in Singapore.

The low rate is slowing the territory’s effort to reach herd immunity, pivotal to a full reopening of the economy.

Hong Kong has secured an adequate supply of vaccines for its whole population — and should be in an “enviable position” as one of the first regions to reach herd immunity, Lau Yu-lung (劉宇隆), a member of the government advisory panel on COVID-19 vaccines, wrote this month in a local medical journal.

“Instead, we remain far from this goal because of vaccine hesitancy, internal conflict and mistrust,” Lau wrote.

A government scientific committee on Thursday said that there was no need to introduce vaccines from AstraZeneca in Hong Kong, in part because of the availability of alternate vaccines.

Hong Kong has been ramping up efforts to incentivize skeptical residents to get vaccinated. The government this month outlined “vaccine bubbles” that would relax some social curbs only for vaccinated people.

Hong Kong Chief Executive Carrie Lam (林鄭月娥) said the new measures could be introduced toward the end of this month if the situation remained stable.

Bars and nightclubs are to be conditionally allowed to reopen at half capacity until 2am if all staff and customers receive at least one vaccine dose, according to Tommy Cheung (張宇人), a member of the advisory Executive Council, citing government officials.

Two people are capped per table and rules would be reviewed every two weeks, he said on Friday.

The latest expansion of eligibility also comes as the territory wrestles with a highly transmissible virus variant that triggered a 14-day ban on flights from India, Pakistan and the Philippines.

Hong Kong reported three local cases yesterday, one of which is untraceable and involves the N501Y mutant virus strain. The variant was first detected in South Africa. The territory quarantined about 60 residents of the building where the patient resided in Mid-Levels on Friday.
#covid 19  #vaccine  #biontech  #astrazeneca  #covid  #vaccines
Add Comment