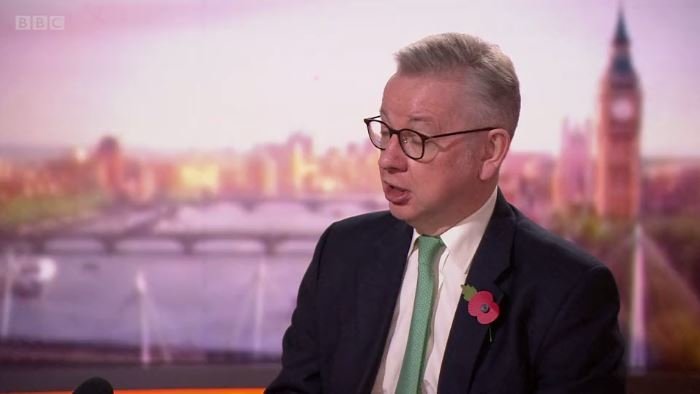 Michael Gove says it is his "fervent hope" that England's new lockdown will end on 2 December - but that ministers will be "guided by the facts".

"We do need to get the R rate below 1," the Cabinet Office minister told the BBC's Andrew Marr Show.

The strict measures are due to come into force from Thursday.

Pubs, restaurants, gyms, non-essential shops and places of worship will close, but schools, colleges and universities can stay open.

The prime minister is expected to deliver a statement in the Commons on Monday before a vote on the latest restrictions on Wednesday. Labour has said it will back the lockdown.

Boris Johnson said he expects the lockdown to last until 2 December, after which England's regional tiered system will be reintroduced.

But Mr Gove told the BBC decisions would "obviously be guided by the facts".

He said ministers believe "on the basis of the evidence that we have that we will be able to [lift restrictions]" by 2 December.

But he stressed that "we do need to get the R rate [the number of people that one infected person will infect] below 1".

Earlier, he told Sky News the lockdown could be extended beyond the December deadline.

What are the new restrictions?

*  People will be told to stay at home except for specific reasons
*  These include work which cannot be done from home, childcare or education, exercise outdoors, medical reasons, essential shopping, providing care for vulnerable people or for volunteering, and visiting members of your support bubble
*  Meeting indoors or in private gardens will not be allowed, but individuals can meet one other person from another household outside in a public place
*  Non-essential retail will close, but can remain open for click-and-collect delivery
*  Pubs, bars, restaurants will have to close, but can still provide takeaway and delivery, excluding takeaway of alcohol
*  Indoor and outdoor leisure facilities, such as gyms and swimming pools, will also close, along with entertainment venues and personal care facilities such as beauty salons
*  Places of worship will close, unless they are being used for funerals, to broadcast acts of worship, individual prayer, formal childcare, or essential services such as blood donation or food banks
*  Construction sites and manufacturing workplaces can remain open
*  Weddings and civil partnership ceremonies will not be able to take place except in exceptional circumstances, and funerals will be limited to a maximum of 30 people
*  Children will still be able to move between homes if their parents are separated
*  Clinically vulnerable people will be asked to be "especially careful" but people will not be asked to resume shielding
*  Overnight stays, staying in a second home, and holidays will not be allowed - including in the UK and abroad - although there are exceptions, such as work trips
*  People will be told to avoid all non-essential travel by private or public transport

Labour leader Sir Keir Starmer told the BBC there would "be no effective exit on 2 December unless the government uses this time to fix test, trace and isolate".

He has called for the lockdown to stay in place until the R rate is below 1.

Also on the Andrew Marr Show, Sir Jeremy Farrar, chairman of the Wellcome Trust and Sage member, said the proposed end date of the four-week lockdown was "useful" but people should not be "fixed on it" as it is not clear what the situation will be like in the last week of November.

He added it would be "much better to extend lockdown for another couple of weeks prior to Christmas" so people could enjoy that time. 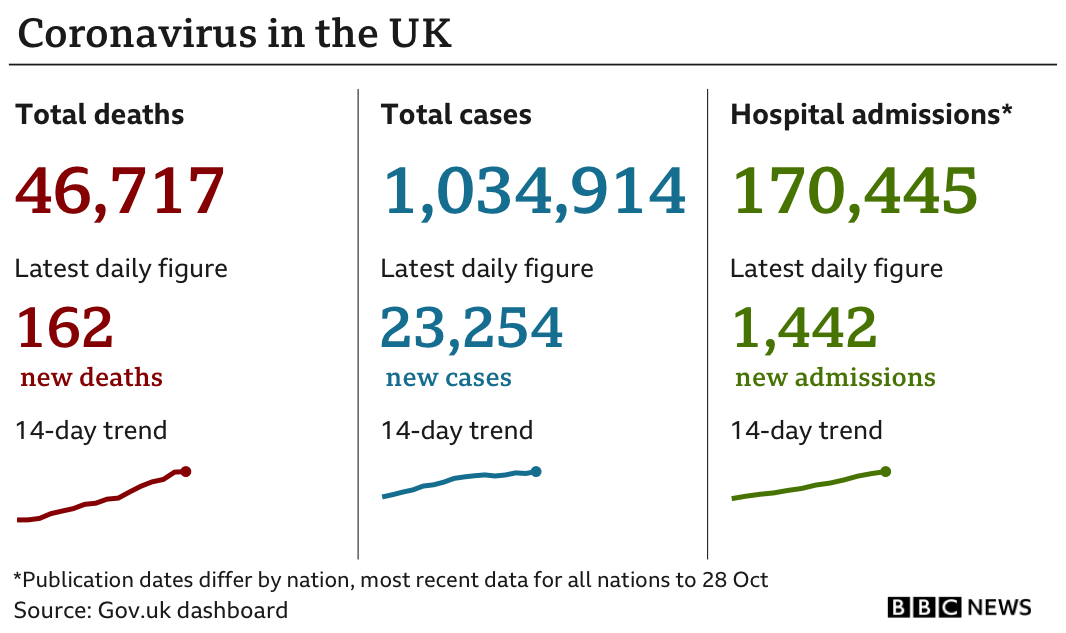 On Sunday, the UK recorded 23,254 new confirmed cases of coronavirus and 162 deaths within 28 days of a positive test.

Mr Gove said ministers were moved to introduce more stringent measures in order to prevent the NHS from being overwhelmed.

If action was not taken now "we would face a situation by 4 December [...] that the NHS would be full", he said, adding: "Every available space and every available corridor taken."

He added: "I don't believe it would be that case, but I do believe that we want to keep schools open and I believe that the measures that we are putting in place will enable us to do so."

Full details of the regulations are expected to be published ahead of a vote by MPs on Wednesday, but ministers have clarified some aspects of the new rules.

Health minister Nadine Dorries said children under school age will not count towards the limit of two people meeting outside, following concerns from new parents that they would be socially isolated.

She said children and adults who are dependent on round-the-clock care because of disabilities would also be an exception.

'Less than one in ten beds' taken by Covid patients

Ministers have issued stark warnings about the risk of the NHS becoming overwhelmed.

Hospitals are under huge pressure in a number of areas, particularly in the north west.

But what we are not being told is exactly just how full they are.

The figures presented by the government detail how many patients are in hospital with Covid - currently they take up less than one in 10 beds.

However, so far both NHS England and the Department for Health and Social Care have refused to reveal the number of available beds once you take into account patients being treated in hospital for other conditions.

We know the amount of non-Covid treatment for things such as cancer care and routine surgery is still not back to normal levels - and the requirement for social distancing and other infection control measures means capacity is reduced overall.

But it's still likely there are a significant number of available beds in many places.

Clearly it's a fast-moving picture and there will be a need to act before things spiral out of control.

But the public deserves to be given the complete picture if it's being asked to make such huge sacrifices.

Meanwhile, there has been criticism after the government's decision to extend the UK furlough scheme, covering 80% of employee wages, until December - hours before it was due to end.

Welsh First Minister Mark Drakeford said extending the scheme mid-way through Wales' "firebreak" lockdown was "not fair at all" after Chancellor Rishi Sunak rejected his requests to boost subsidies for wages.

Mayor of Liverpool Joe Anderson said the government "dismissed" the north of England's call for the furlough scheme to be introduced in tier three regions last month.

Scotland's First Minister Nicola Sturgeon is also seeking clarity over whether the support will be available to Scottish firms in the future if the nation enters a lockdown later in the year.

Mr Gove said the latest restrictions "go further than anything that has been put in place in Greater Manchester and elsewhere", adding that economic support was kept under review.

Writing in the Telegraph, Sir Iain said the Scientific Advisory Group for Emergencies (Sage) had "pressurised" the government into taking this decision, with its members "publicly lecturing" the government.

And England's Catholic Church strongly criticised the government for banning communal worship in the new lockdown. 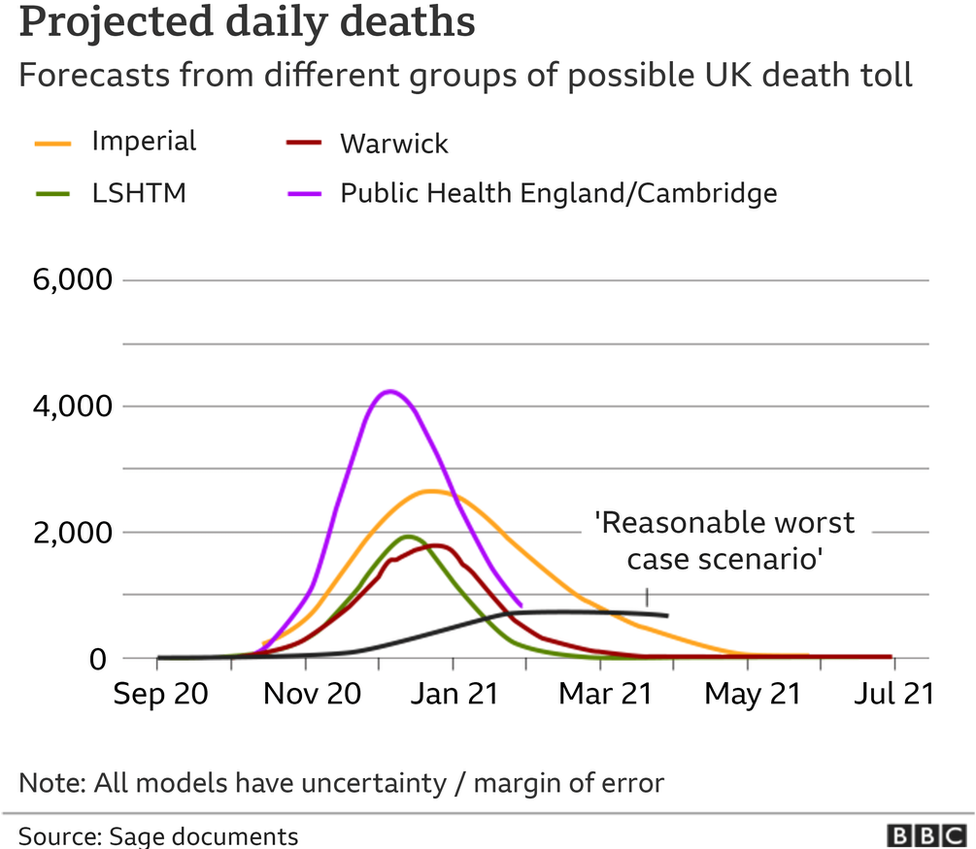 One key document shows several UK daily death projections by different modellers, compared with the first wave and the government's "reasonable worst-case scenario" - which was seen in a report in August

The prime minister told a Downing Street news conference on Saturday that the measures were to prevent a "medical and moral disaster" for the NHS.

He warned that Christmas may be "very different" but said he hoped taking action now would mean families can gather.

The UK recorded another 21,915 confirmed coronavirus cases on Saturday, bringing the total since the pandemic began to 1,011,660.

Another 326 people were reported to have died within 28 days of a positive test.

Elsewhere in the UK, Wales' 17-day firebreak lockdown is due to end as planned on 9 November and Scotland is advising that people should not travel to or from England, except for essential purposes, ahead of the nation's five-level system of restrictions coming into force on Monday.