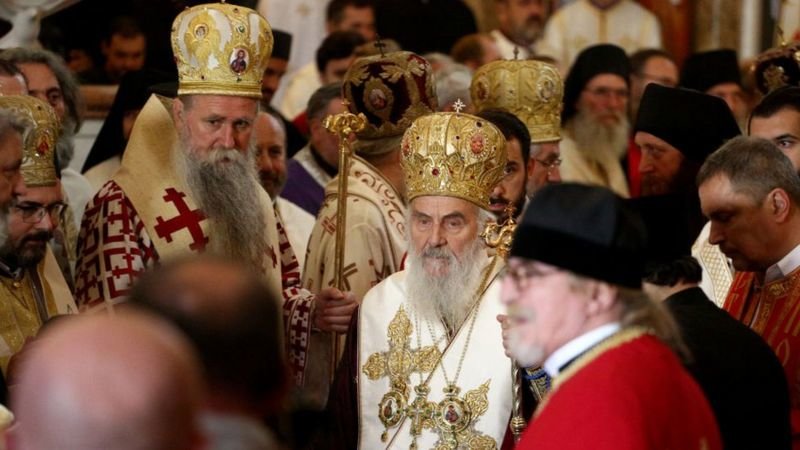 Serbia's leading religious figure has contracted coronavirus, days after attending a large public funeral for a senior bishop who died of Covid-19.

Patriarch Irinej, the 90-year-old head of the Serbian Orthodox Church, was admitted to hospital on Wednesday.

He led the funeral of the church's most senior cleric in Montenegro, 82-year-old Amfilohije Radovic, on Sunday.

Mourners gathered at the event without masks and many kissed the bishop's body as it lay in an open coffin.

This was despite a major spike in coronavirus cases in both Serbia and Montenegro, and a warning from the authorities that the event posed a risk to public health.

Amfilohije, who died on Friday, described pilgrimages as "God's vaccine" and avoided wearing a mask.

As well as Patriarch Irinej, several other people who attended the funeral are believed to have contracted Covid-19. Amfilohije's successor, meanwhile, was said to be suffering with "mild pneumonia".

"His Holiness is hospitalised in a Covid-19 hospital in Belgrade," Patriach Irinej's office said in a statement. "[He remains] without symptoms and is in excellent health."

The Serbian Orthodox Church is a powerful institution in both Serbia and Montenegro. And its leaders can be important allies for politicians - or dangerous adversaries.

That prompted Metropolitan Bishop Amfilohije, who died on Friday, to lead protests and give his blessing to the opposition parties which defeated the president's party in August's parliamentary vote.

The bishop was also highly involved in post-poll coalition negotiations. Prime Minister-designate Zdravko Krivokapic was a prominent, unmasked mourner at his funeral.

Serbia's president, Aleksandar Vucic, also attended - but kept his mask on. He faces a constant challenge balancing the Church's uncompromising stance on Kosovo's status with his goal of steering Serbia towards EU membership.

What else is happening in Europe?

European countries are responding to a second wave of infections, and many are seeing spikes in cases and hospital admissions.

*  Greece announced a second lockdown would come into effect from Saturday and would remain in place for three weeks. It comes after a new daily infection record of 2,646 confirmed cases was reported on Wednesday. Prime Minister Kyriakos Mitsotakis said "it was a difficult decision" but "measures must be taken... to overcome this second wave"


*  Greeks will only be able to leave their homes if they make an official request via a text message and then receive authorisation. But unlike the first lockdown, primary schools will stay open under the measures


*  In Italy, four regions will face the strictest form of lockdown from Friday. The country has a three-colour lockdown system and Lombardy, Piedmont, Val D'Aosta and Calabria have been declared "red zones" meaning people can only leave home for essential reasons


*  In England, a new four-week lockdown has begun. People have been told to stay at home and non-essential shops, pubs and gyms have been ordered to close


*  Elsewhere, Sweden's Prime Minister Stefan Löfven is self-isolating after someone in his circle came into contact with a person infected with Covid-19


*  And in Russia, Moscow's mayor said the city's coronavirus situation was getting worse. Infections have been climbing in the country at a sharp rate in recent weeks