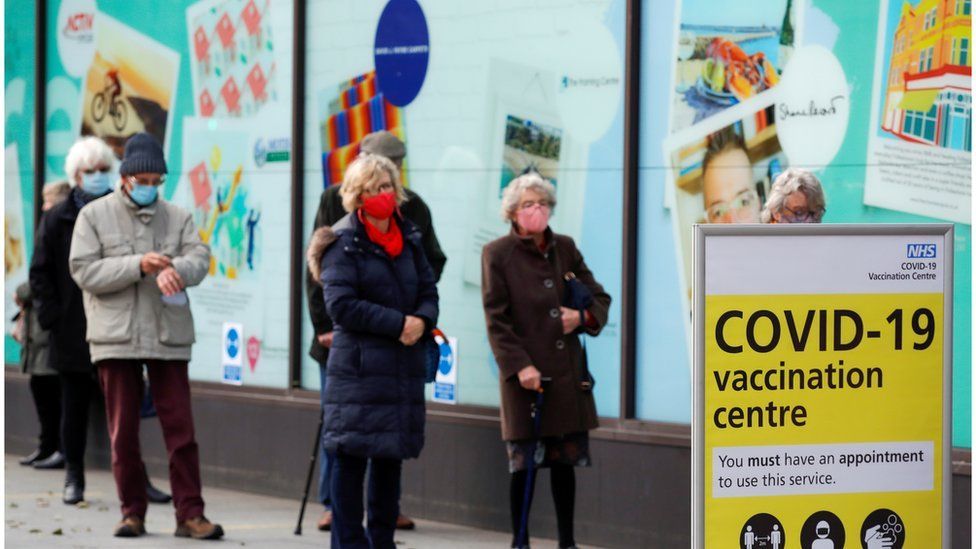 There is "early data" showing a reduction in transmission in people who have had a coronavirus vaccine, the health secretary has said.

Matt Hancock said hospital admissions were falling "much more sharply" than they were in the pandemic's first wave.

The government aims to offer a first jab to all adults in the UK by the end of July, with one in three adults already vaccinated.

Boris Johnson will unveil his plan for ending England's lockdown on Monday.

The PM is due to present his plans to MPs in the Commons in the afternoon, before leading a Downing Street briefing at 19:00 GMT.

A further 9,834 coronavirus cases were recorded in the UK on Sunday and 215 more people have died within 28 days of a positive Covid test, according to the government's daily figures.

The UK's devolved nations have the power to set their own restrictions, and have been moving at different speeds:

*  In Scotland, the government hopes to publish a route out of lockdown next week, but First Minister Nicola Sturgeon has urged people not to book Easter holidays

*  In Wales, First Minister Mark Drakeford has announced up to four people from two different households can exercise outdoors together from Saturday; he said he hoped the "stay-at-home" requirement could end within three weeks, with some non-essential shops and hairdressers possibly reopening at the same time

As part of the road map, Public Health England will publish new data on the impact of vaccines on transmission rates.

Mr Hancock told the BBC's Andrew Marr Show on Sunday that he was "absolutely delighted" with the progress of the vaccine rollout.

But he added that while hospital admissions were falling, the number of people in hospital - currently around 18,000 - was still "far too high". 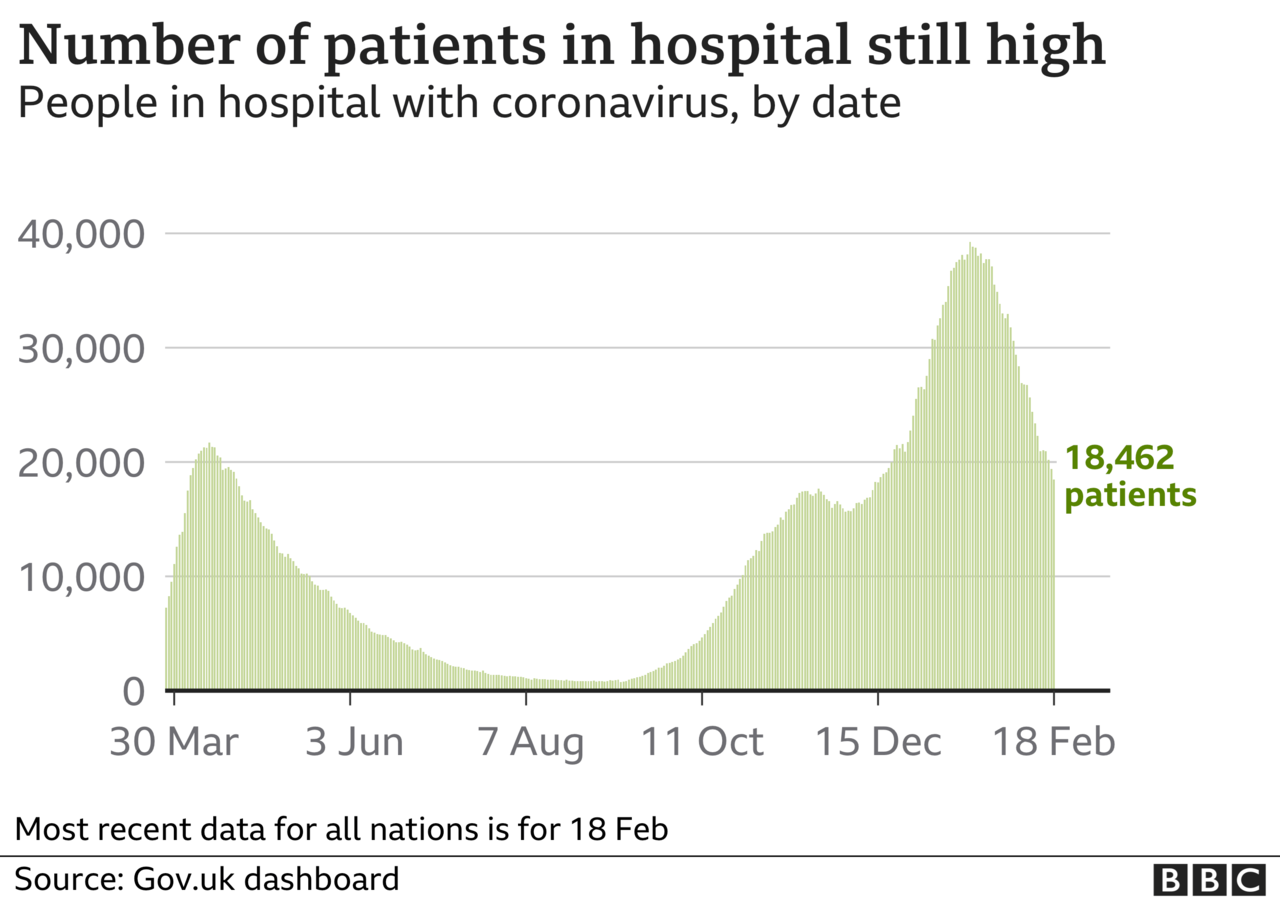 The health secretary reiterated the government's new plan to offer a jab to adults aged 50 and over and those in the top nine priority groups by 15 April, followed by all adults by the end of July.

The government's previous target was to offer all adults the first dose by September, but the PM has said he wants the rollout to "go further and faster".

Mr Johnson has said that this would give vulnerable people protection "sooner" and help to further ease lockdown restrictions across the country.

However, the order of priority for the under-50s has yet to be outlined by the Joint Committee on Vaccination and Immunisation (JCVI).

Prof Adam Finn, a member of the JCVI, told BBC Breakfast earlier that he expected a public announcement would be made on vaccine priorities at some point in the next week.

Lockdown has reduced cases more than some believed was possible - and now there are the early indications the vaccination programme is having an impact too.

Despite this, it looks likely the government will announce a very gradual lifting of restrictions in England on Monday.

Why the caution? Even if rates rebound only a little, there are still large numbers of vulnerable people.

Nearly half of hospitalisations have been in the under-70s, for example.

What is more, high levels of infection at a time when vaccines are being rolled out and immunity being built provides the perfect breeding ground for new variants.

Mutation may be unavoidable in the long-term, but encouraging them at this point would, many experts believe, be foolish.

The problem is that there are so many unknowns.

Will the arrival of spring help keep the virus at bay? Will the UK variant mean the re-opening of schools has a significant impact on infection levels?

But, on the flip side, being too cautious will prolong the costs of lockdown.

It is, to say the least, a tricky balancing act.

So far, more than 17 million people have received a vaccine since the rollout began in December last year.

Mr Hancock said ministers were "confident" the vaccine worked effectively against the old strain of the virus and the so-called Kent variant.

However, he warned the government did "not yet have the confidence" the jab was "as effective" against the South Africa variant and the variant first seen in Brazil, but that enhanced contact tracing and stricter border controls were reducing the cases of those variants in the UK.

The latest data showed "around a dozen" new cases of the South African variant in the UK, with an overall total of around 300 cases, Mr Hancock added.

Asked if the spread of the South Africa variant was "shrinking", he said: "I think that's a good summary yes".

Prof John Edmunds, a member of the government's Sage and Nervtag committees, told Andrew Marr that the vaccine rollout should turn to children "as fast as we can".

The infectious diseases expert said: "We're all at risk and we can all spread the virus, and so until we've all been vaccinated - I include children here - then there is going to be significant risk of a resurgence."

Prof Edmunds, who said he had two children of secondary school age, warned there would continue to be "major disruption in schools until we have vaccinated our children".

Schools remain the top priority for the easing of restrictions in England, with Downing Street still hoping they can reopen on 8 March. This would be followed by reuniting families and allowing people to have more social contact.

In the first confirmed easing of restrictions, care home residents in England will each be allowed one regular visitor from 8 March.

Those nominated visitors will be able to meet indoors and hold hands with their loved one, but must wear personal protective equipment and be tested beforehand.

Mr Hancock said on Sunday that Covid restrictions would be eased in stages, with "weeks" in between each one.

He told Times Radio that it takes a few weeks for the impact of easing measures to be seen, so there would be "weeks between the steps".

Mr Hancock added that social distancing measures and the wearing of face coverings would be likely to remain in place for a while.

Labour leader Sir Keir Starmer has welcomed the government's accelerated vaccine target but called on No 10 to "urgently" explain how it will prioritise the under-50s.

He told Sky News' Sophy Ridge on Sunday programme that he wanted all children in England back in school on 8 March, despite education unions calling for a more "cautious" and "phased" return. 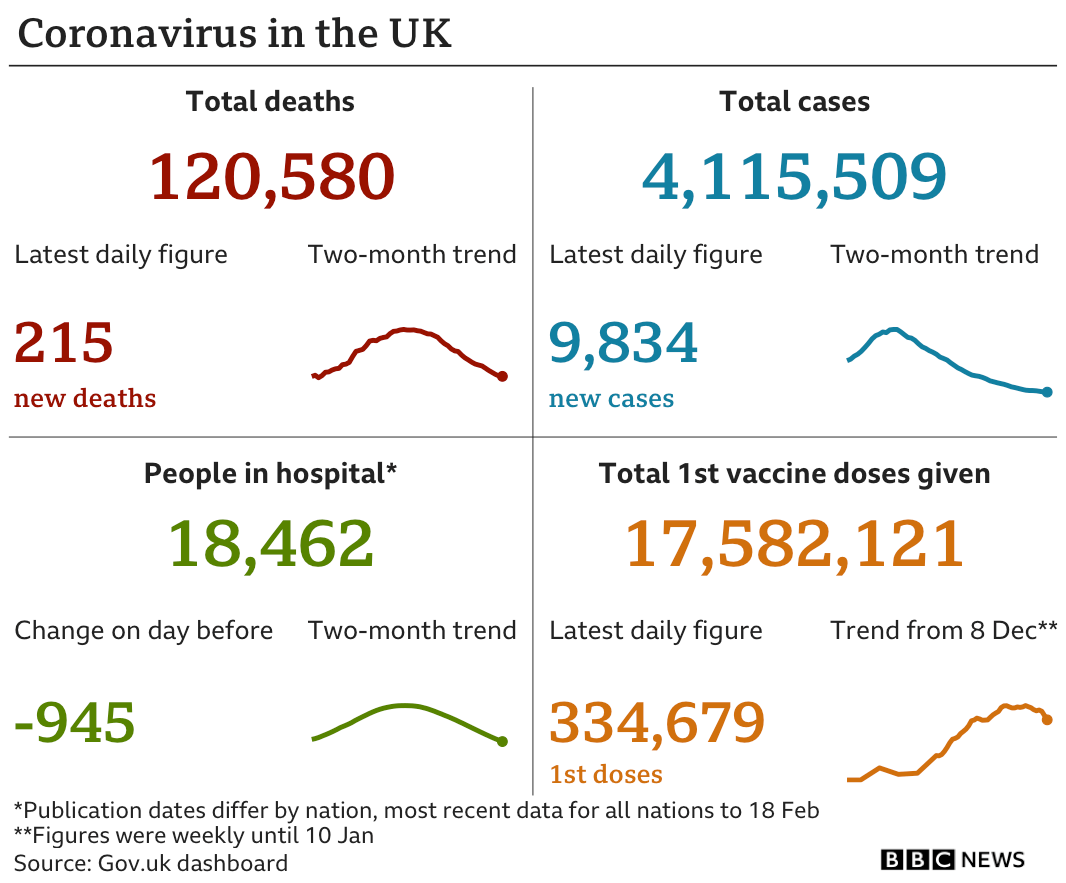