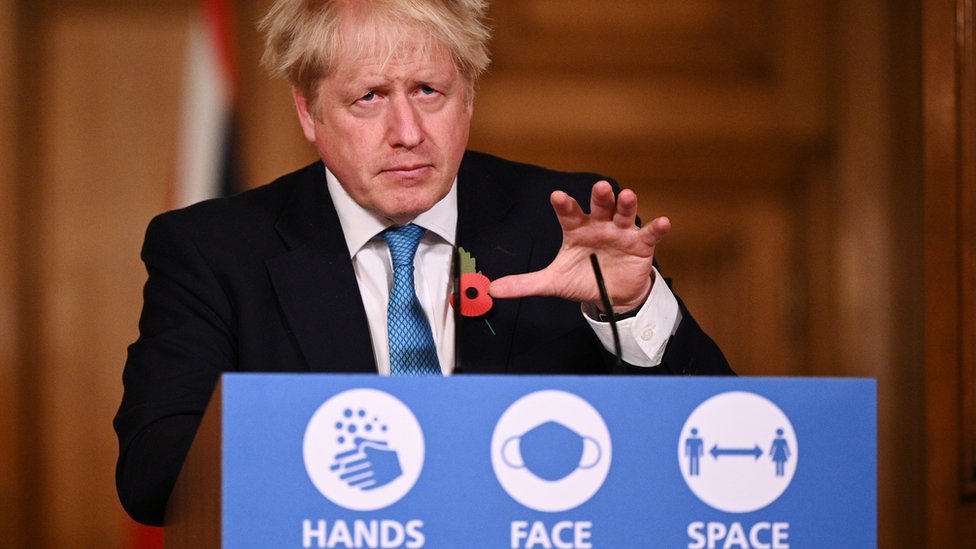 The prime minister has stressed that people in England should stay at home, as a second lockdown begins.

Boris Johnson said he knew people were weary but four weeks of measures would make a "real impact" on the virus.

Pubs, restaurants and non-essential shops were forced to close on Thursday as part of the new restrictions.

Earlier, Chancellor Rishi Sunak announced the furlough scheme to support jobs would be extended across the UK until the end of March.

Speaking at a press conference in Downing Street, Mr Johnson said the measures were "not a repeat of the spring" and there was "light at the end of the tunnel".

He said the restrictions in England would "automatically expire" on 2 December. There is expected to be another vote on the next steps needed to tackle the virus before the lockdown ends.

He added that although the challenge was "significant across the UK", the devolved nations were working together on a "joint approach", with the objective of having "as normal a Christmas as possible".

The devolved nations each make their own restrictions with Wales currently in a 17-day firebreak lockdown, while Scotland is in a tier system and Northern Ireland in the midst of a four-week limited lockdown. 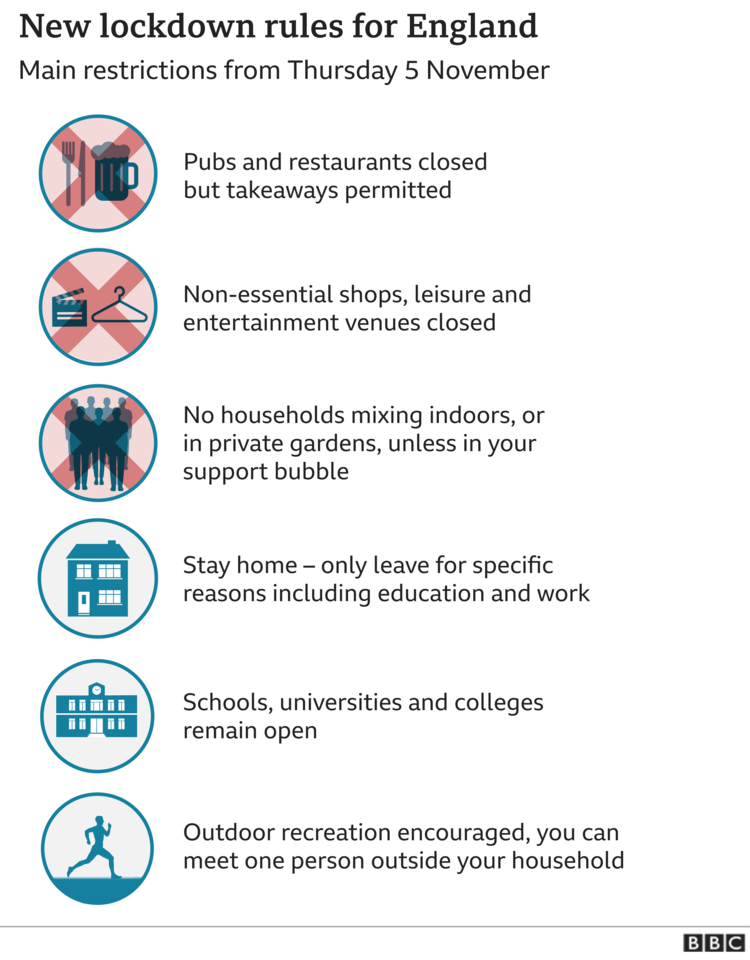 In addition to the extension of the furlough scheme, the prime minister said a further £1.1bn will be made available for local authorities to support businesses, with £2bn for the devolved nations.

He said the government will also put £15m towards a scheme to help to provide accommodation for rough sleepers during the pandemic. This money is part of funding previously announced by the government to tackle homelessness.

The UK recorded a further 378 coronavirus deaths and 24,141 confirmed cases on Thursday.

NHS England chief executive Sir Simon Stevens, who appeared alongside the prime minister, said about 30,000 staff in the health service were either off with coronavirus or were having to self-isolate, and "that has an impact".

"This second wave of coronavirus is real and it's serious," he said.

"The health service has been working incredibly hard to prepare and to catch up on the care that was disrupted during the first wave."

Sir Simon added it will be known "conclusively" by the end of the second national lockdown whether it had affected the increase in Covid-19 hospital admissions, but said the NHS was "hoping and expecting" they would not see the increases that infectious disease experts had warned about.

Earlier, the UK Statistics Authority criticised the way data has been presented by the government to justify England's second lockdown, highlighting the use of modelling in a TV briefing on Saturday showing the possible death toll from Covid this winter.

Shunning projections that have proved so controversial, NHS England chief executive Sir Simon Stevens tried to play it straight at the news briefing.

He presented a chart showing how the numbers in hospital have gone up since the summer with more than 11,000 in hospital in England. 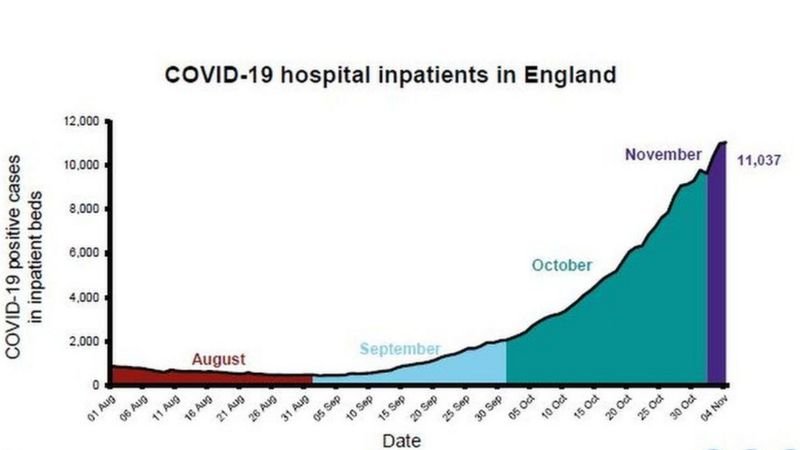 He then provided some important context - comparing that to the numbers in hospital with flu - around 3,000 in the depths of winter - or getting treatment for cancer, normally 7,000.

This shows the burden Covid is placing on the health service.

We don't know the latter because NHS bosses are not publishing them.

An important point on the day that the UK Statistics Authority called for greater transparency over the way Covid data is presented.

Unlike the first national lockdown in March, schools, universities, and nurseries will remain open, and people will be able to meet another person who they do not live with in an outdoor public place such as a park or beach.

The rules say people cannot mix with anyone they do not live with indoors or in private gardens and people should stay at home except for specific reasons including education and work, if it cannot be done from home.

* Germany and Sweden have been taken off the UK's travel corridor list, meaning people who arrive from those countries will have to quarantine for 14 days


* Foreign Secretary Dominic Raab is self-isolating after a close contact tested positive for the virus. He will continue to work remotely

* Anti-lockdown protesters have marched through central London, with a large police presence near Trafalgar Square and four arrests made near Charing Cross Station