The issue of ‘loss and damage’ remains a sticking point at COP27, particularly how to compensate poor countries hit by climate change.

US climate envoy John Kerry has tested positive for COVID-19 at the United Nations climate talks in Egypt, where negotiators were desperately trying to break a deadlock over loss and damage funding for developing countries battered by weather disasters.

Kerry’s illness has added worries to the negotiations, which were scheduled to end on Friday but have been continuing with no clear end in sight.

The talks at the COP27 summit in the Red Sea resort of Sharm el-Sheikh have stumbled on the controversial issue of “loss and damage” funding for less developed countries to deal with the effects of climate change.

“He is fully vaccinated and boosted and experiencing mild symptoms. He is working with his negotiations team and foreign counterparts by phone to ensure a successful outcome of COP27,” Kerry’s spokeswoman Whitney Smith wrote in a statement late on Friday.

Loss and damage remains the main sticking point between rich and poor nations, particularly the issue of how to compensate countries that have already been ravaged by climate-driven floods, droughts, mega-storms and wildfires.

Negotiations, at least those in public, hit a lull by Friday evening as press conferences and plenaries were postponed or cancelled. Diplomats said they hoped for late-night progress as they changed airline reservations for talks going into extended overtime on Saturday.

“I think we’re in for a bit of a long haul,” World Resources Institute’s International Climate Director David Waskow said.

“Loss and damage sits at the centre in terms of what needs to be done to get this over the finish line,” he said.

Representatives from nearly 200 countries have gathered at the COP27 in Egypt for two weeks with the aim of driving forward action on climate change as the world faces a worsening onslaught of weather extremes.
For many vulnerable countries, loss and damage is the defining issue of the conference, with some saying the success of the meeting hinges on the creation of a specific fund.

Richer countries, which have previously baulked at the issue of compensation over fears of open-ended liability, have accepted that countries in the crosshairs of increasingly destructive climate-driven disasters need funding help. However, they called for a broader set of donors as well as to prioritise the most climate-vulnerable countries as recipients.

Industrialised countries are also keen to steer the focus onto other critical issues, like finding agreement on emissions-cutting ambitions and reaffirming a goal to limit average warming to 1.5 degrees Celsius above pre-industrial levels, which scientists say is a safer guardrail to avoid the most dangerous climate effects.

A cascade of climate-driven extremes in recent months – from floods in Pakistan and Nigeria to heatwaves and droughts across the world – have shone a spotlight on the ferocious effects of a warming world for emerging economies, as well as small island states threatened by rising sea levels.

The Group of 77 and China coalition of 134 developing countries launched an opening gambit on loss and damage this week, with a proposal to create a fund at COP27 and operational details to be agreed later.

Pakistan’s Climate Minister Sherry Rehman, whose country chairs G77+China, told delegates on Friday they were willing “to find common ground” on the subject of the proposed fund. 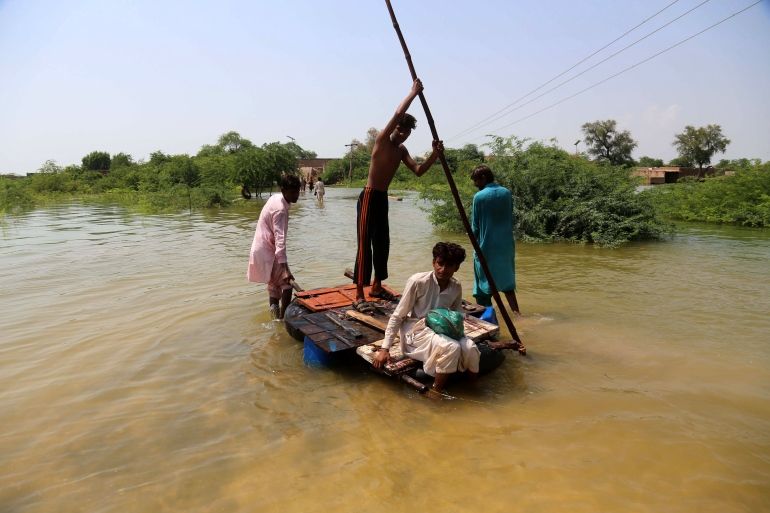 People move to higher grounds after their villages are inundated by flood following a breach in Manchar Lake to reduce overflow, in Jamshoro district, Sindh province, Pakistan, in September 2022
A compromise from the European Union, proposed late Thursday, suggested a fund specifically for the most vulnerable nations saying the money should come from a “broad funder base” – a code for countries including China and Saudi Arabia which have become wealthier since they were listed as developing nations in 1992.

“I have to say this is our final offer,” European Commission Vice President Frans Timmermans told reporters on Friday morning.

Even with new commitments, the world is on track to heat up by about 2.5C by the end of the century – enough, scientists say, to trigger dangerous climate tipping points.