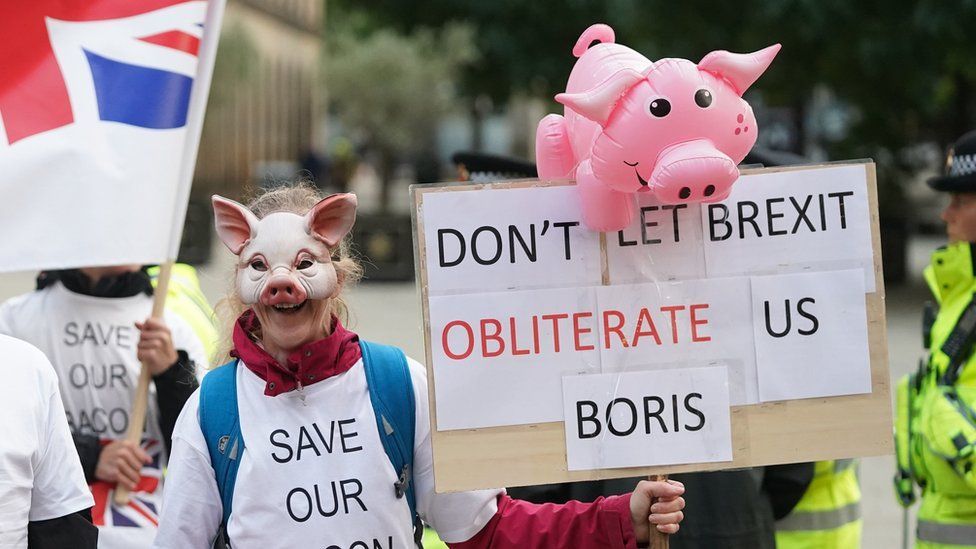 The government is looking at relaxing the language requirement of its immigration system to get butchers into the UK, says the environment secretary.

The pork industry has warned of a crisis that could see 120,000 pigs killed because of labour shortages.

Butchers are on the government's skilled occupation list, allowing them to work in the UK, but they need to be able to speak English to get a visa.

Pig farmers have been protesting at the Tory Party conference over the issue.

The Save British Bacon campaign said both Brexit and Covid had led to a shortage of skilled butchers, meaning rather than being killed for meat, pigs were being slaughtered and incinerated to make room on their farms - or because they had grown too large.

The farmers said they were in a "dire situation" and called on the government to make changes to get more workers into processing plants.
Asked about the issue at a conference fringe event, Environment Secretary George Eustice said some people in the sector had "raised issues around the language thresholds".

And, as a result, he said the requirement was "something I know the Home Office are looking at".

But Mr Eustice played down the idea of using temporary visas as a solution - like the government is introducing for poultry workers and HGV drivers - saying the issues in the pork industry were not seasonal.

Boris Johnson was asked about the issue by the BBC's Andrew Marr on Sunday, but faced fury from the industry for appearing to dismiss its concerns.

"I hate to break it you Andrew, but our food processing industry does involve the killing of a lot of animals," he said. "That is the reality.

"If I may say so, the great hecatomb of pigs you describe on farm has not taken place. Let's see what happens."