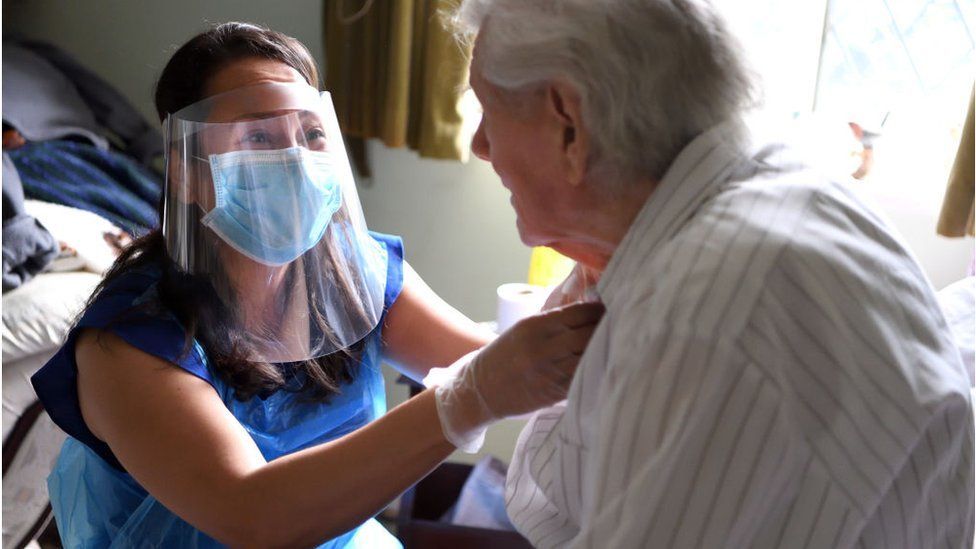 MPs have approved compulsory vaccinations for care home staff in England, but a number of Conservatives rebels voiced anger at the plans.

From October, anyone working in a Care Quality Commission-registered care home in England must have two vaccine doses unless they have a medical exemption.

The House of Commons approved the regulations by 319 votes to 246.

But Tory MPs criticised the government for not publishing an impact assessment of the policy before the vote.

Health minister Helen Whately told MPs the "impact assessment is being worked on".

Almost 30,000 more care home residents in England and Wales died during the coronavirus outbreak than during the same period in 2019, ONS figures released this month showed.

Ministers have previously expressed concern about the low take-up of the vaccine among some care home staff.

"It isn't good enough to expect us to vote on something that is difficult and controversial and complicated, and not share the information with the House that the minister has at her disposal. It is an abuse. It's not good enough."

Conservative MP William Wragg said he was "in despair", adding: "The government is treating this House with utter contempt. Ninety minutes on a statutory instrument to fundamentally change the balance of human rights in this country is nothing short of a disgrace."

Mr Wragg went on to raise the case of a care worker who fears losing her job as a result of the policy, asking: "Is that what we're prepared to do to our fellow citizens as a Conservative government?

Labour's Rachael Maskell added: "We're having to make a decision in the House this evening on the balance of risk and therefore we haven't been given the data because the impact assessment hasn't come forward."

Deputy Speaker Nigel Evans said it was a "totally unsatisfactory" situation and he would raise the issue with the Speaker, Sir Lindsay Hoyle.

Care minister Ms Whately said guidance would be forthcoming, but suggested managers could discuss the vaccine with staff or look at an alternative role for those who did not want to be vaccinated.

But she acknowledged there were not "that many roles" that did not involve being in the care home.

She said in that situation, if a staff member did not want to be vaccinated, then a notice period could follow with a "fair process".

Care organisations have previously warned that compulsory vaccinations could cause significant difficulties in a sector that already struggles to recruit enough people.

The British Medical Association, which represents doctors, warned compulsion was "a blunt instrument that carries its own risks".

Governments in Scotland, Wales and Northern Ireland have said they have no plans to make Covid jabs mandatory for care home staff.

The move to mandatory vaccinations for care home staff in England follows a consultation by the Department of Health and Social Care, launched in April, two months after the government said it had met its target of offering all front-line care workers a first dose of a vaccine by mid-February.

At the time, it said 47% of English care homes for older people had more than a fifth of staff yet to take up the vaccine, despite staff at all eligible care homes having been offered vaccines, with the vast majority of homes having had repeat visits by vaccine teams.

On Tuesday, the UK reported a further 36,660 cases and 50 deaths within 28 days of a positive coronavirus test.