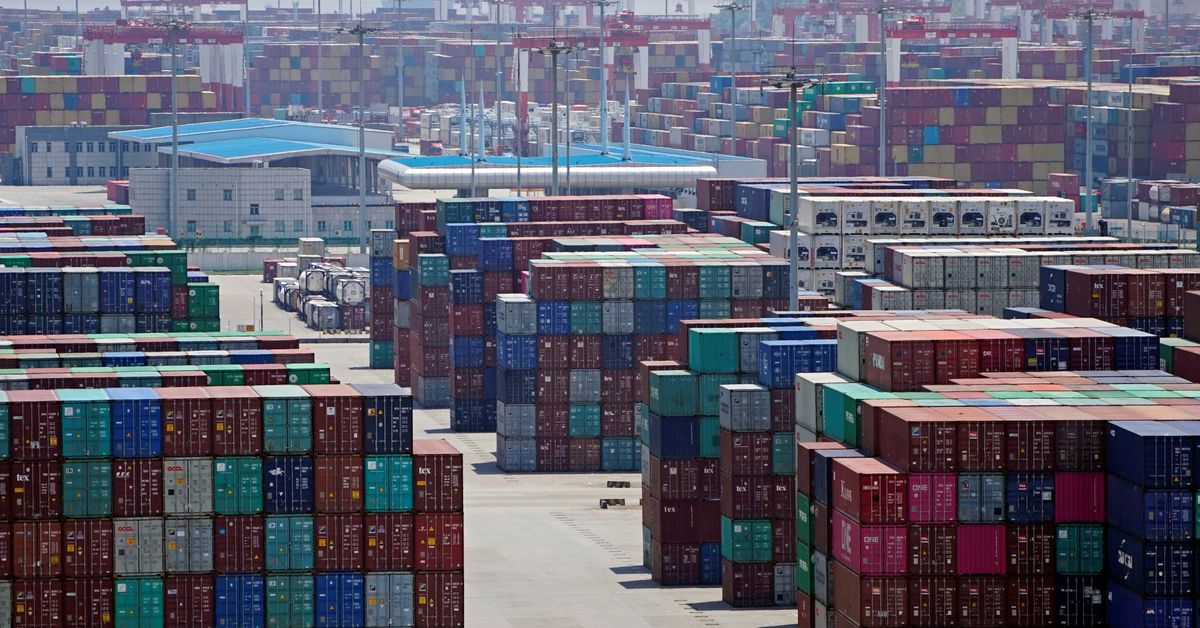 Exports in dollar terms grew 3.9% in April from a year earlier, dropping sharply from the 14.7% growth reported in March although slightly better than analysts' forecast of 3.2%. It was the slowest pace since June 2020.

Imports were broadly stable year-on-year, improving slightly from a 0.1% fall in March and a bit better than the 3.0% contraction tipped by the Reuters poll.

The weak figures show China's trade sector, which accounts for about a third of gross domestic product, is losing momentum as lockdowns across the country ensnared supply chains in major centres like Shanghai, heightening risks of a deeper slowdown in the world's second-largest economy and beyond.

"The virus outbreaks in China led to huge difficulties in the production chains and the supply chains," Chang Ran, a senior analyst at Zhixin Investment Research Institute said in a note on Monday. "Meanwhile, some countries in Southeast Asia have transitioned from recovery to production expansion, replacing Chinese exports to some extent."

"The sharpest falls were in shipments to the EU and U.S., where high inflation is weighing on real household incomes," he said. "The declines were also especially pronounced in electronics exports which suggest a further unwinding of pandemic-linked demand for Chinese goods."

Beijing's extraordinary efforts to curb the country's largest COVID-19 outbreaks in two years have clogged highways and ports, restricted activity in dozens of cities including Shanghai and forced companies from Apple supplier Foxconn to automakers Toyota and Volkswagen to suspend some operations.

Factory activity was already contracting at a sharper pace in April, industry surveys showed, raising fears of a steep slowdown that could also hit global growth.

Shi Xinyu, a foreign trade manager in Yiwu, a commodities trading hub, said only 20-50% of stores in the city are open due to COVID disruptions.

"(The weak import demand came amid) the downward economic cycle and COVID hit," Shi said. "Life is already hard enough and it happens we've got a leaky roof as it rains."

Additionally, heightened risks from the Ukraine war, persistently soft consumption and a prolonged downturn in the property market are also weighing on growth, analysts say.

With the national jobless rate at a near two-year high, authorities have promised more help to shore up confidence and ward off further job losses in a politically sensitive year.

Some analysts even warn of rising recession risks, saying policymakers must provide more stimulus to reach an official 2022 growth target of about 5.5% if Beijing doesn't ease its zero-COVID policy.

However, there are few signs of that happening. The country's top leaders said last week they would stick with their "zero-COVID" policy, stoking worries of a sharper economic downturn.

Exports may have found some support from a weaker yuan , which suffered its worst month in April in nearly two years.

Zhiwei Zhang, chief economist at Pinpoint Asset Management, does not expect export growth to perk up in May as supply problems persist.

"The contraction of imports is a signal, as many firms’ imports of parts of components probably got disrupted," Zhang said in a note. "The resumption of production is quite slow at this stage."

China posted a trade surplus of $51.12 billion in the month, slightly wider than a forecast for a $50.65 billion surplus. The country reported a $47.38 billion surplus in March.