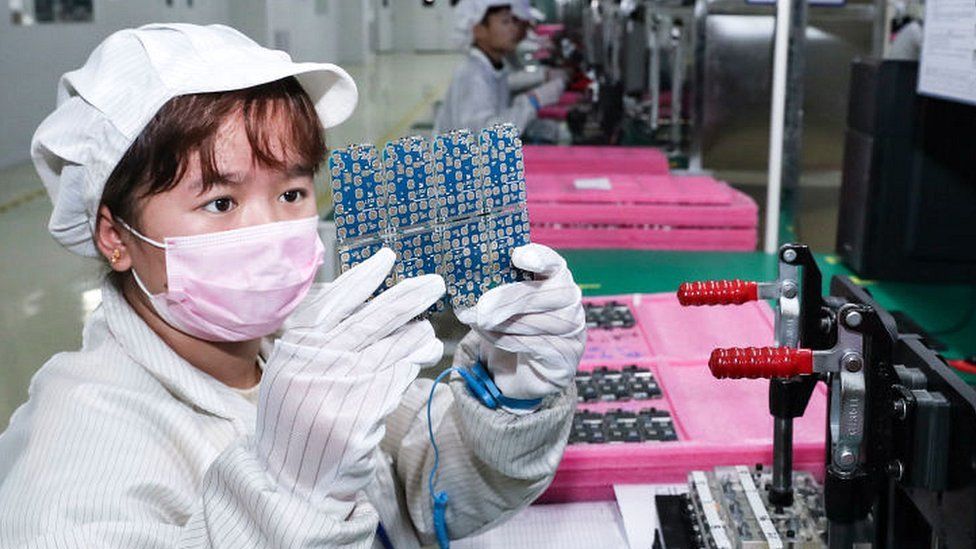 China lockdown: What do zero-Covid policies mean for UK prices?

Some of China's biggest cities have been hit by major Covid lockdowns this spring, and it's had a disruptive effect on the country's economy.

However, it's not just people in China who are going to be affected.

As one of the world's biggest exporters, any halt in production could have an impact on prices for consumers across the world, including the UK - which last year imported nearly £70bn worth of goods from China.

China produces more than a third of the world's electronic goods.

Mobile phones are one of the top categories of goods that the UK buys from China. Between 2020 and 2021, the UK imported £7.3bn worth of telecoms and sound equipment.

Several companies that supply components for Apple - Pegatron, Quanta Group and Compal Electronics - have had to close factories in the Shanghai area because of Covid lockdowns.

By mid-April, the production of three million iPhones had already been affected, according to analysis from investment firm Wedbush Securities, with knock-on effects expected on iPads and MacBooks. 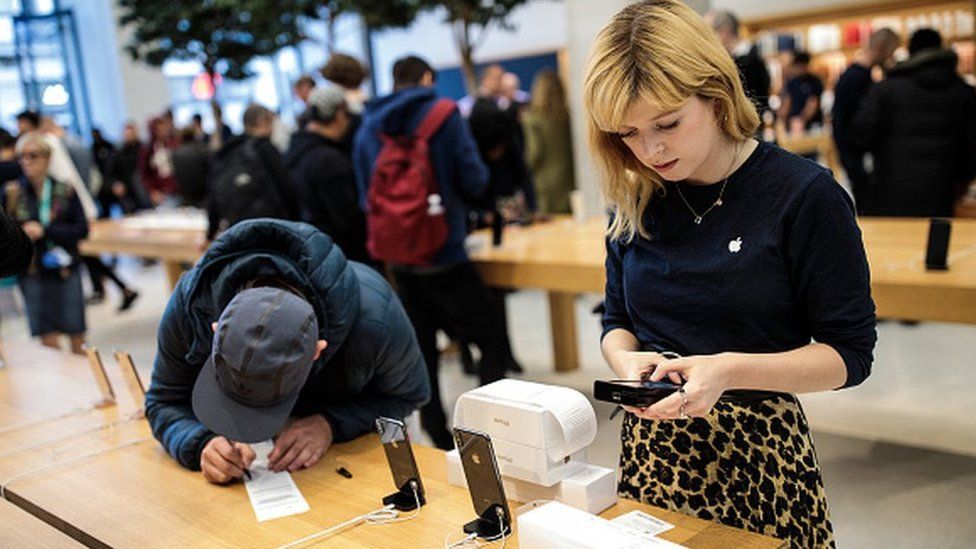 The production of iPhones has been significantly delayed

The sector was already experiencing supply problems because of a surge in demand last year.

Lockdowns could also affect the production of computers and printers.

This is not just about delays to exports - it is also because China needs to import key materials in order to produce the semi-conductors in these devices.

Covid restrictions mean that deliveries to Europe have been delayed by an average of seven days, says Alicia Garcia-Herrero from the Brussels-based think tank, Bruegel. 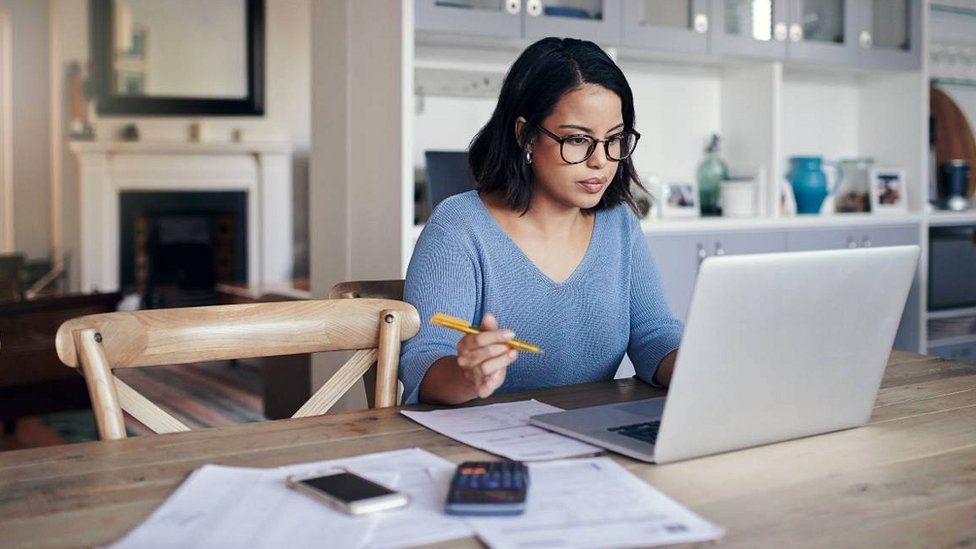 Transport delays could mean higher prices for computers and laptops

Currys PC World told the BBC that the impact of lockdowns was yet to filter through in terms of the availability of products. But it said it was now seeing increasing costs caused by transport problems in China.

China has tried to keep some factories running and ports open by having key workers stay on the premises. However, despite this, it is reported that Shanghai - the biggest container port in the world - is still not operating at normal capacity.

Lockdowns have also lengthened delivery times because Chinese businesses have started shipping their products using alternative ports, which are further away.

The UK doesn't source many cars directly from China but does buy a lot from the EU, with the bloc accounting for more than 80% of UK vehicle imports in 2020.

EU car production relies heavily on Chinese-made components - for example, most German tyres and brake pads are made in China, according to Chinese official data. 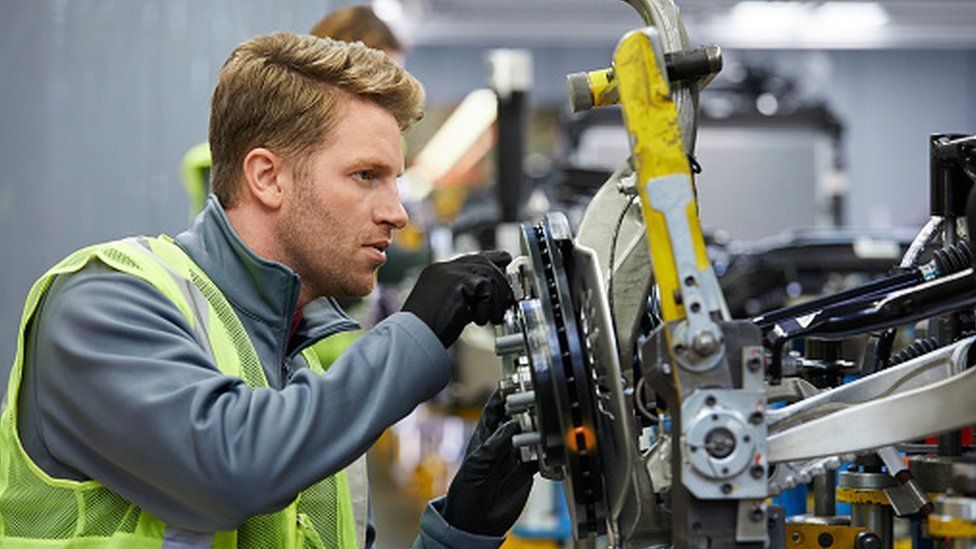 Manufacturing areas such as Guangdong, Jilin and Shanghai have all been under various lockdowns in recent months.

As with electronic goods, car production was also hit by the global chip shortage last year. The sector is now having to deal with transport delays and backlogs caused by lockdowns as well.

In March, the prices for some of the most popular cars in the UK were already as much as 26% higher compared with three years ago, according to one car-buying website.

Ms Garcia-Herrero says if China raises its prices because of increasing costs from the lockdowns, "the consumer in the UK will end up paying for it".

Clothing is the fourth largest category of goods imported by the UK from China.

Jiangsu province, 250 km north of Shanghai, accounts for over 12% of China's clothing production, according to official data.

Although many factories remained open by keeping workers in a "closed loop" system, transport problems have affected exports. In April, the province closed more than 100 toll booths on the main roads to Shanghai and other major export hubs, due to Covid restrictions. 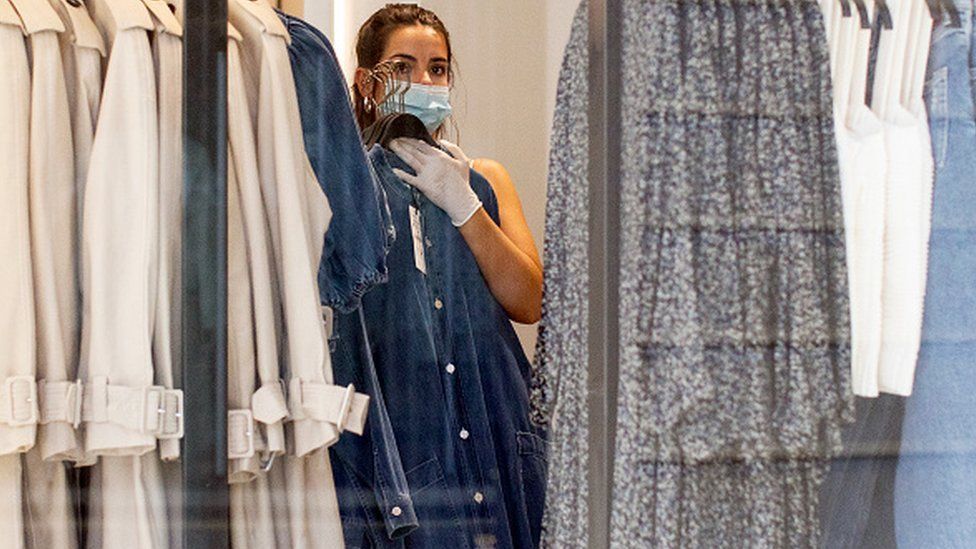 Clothing is among the top categories of goods imported from China

A spokesperson for Primark told the BBC that "to date, we have managed to keep any disruption resulting from the lockdown in Shanghai to a minimum".

However, clothing and footwear prices in the UK rose 9.7% in the year to March 2022, according to the Office for National Statistics - with price rises due to global pressures on supply chains and energy costs, according to the UK Treasury.

China is a major producer of chemicals used widely around the world, and major global chemical manufacturers have plants located in the Shanghai area.

For the UK, they represent the fifth biggest category of imports from China, and one of the most used chemicals is bleach. 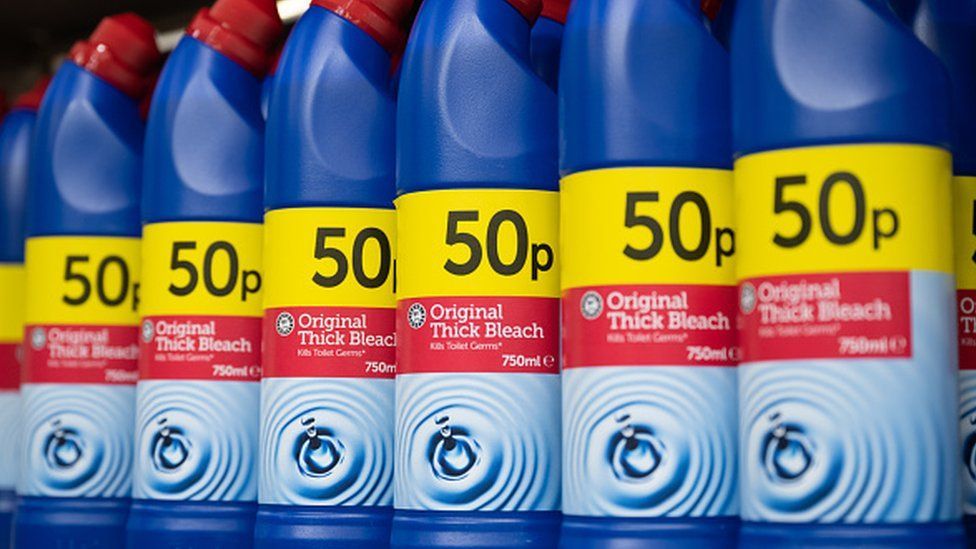 Some of the major industry players have said they've been able to keep factories open, but acknowledges they are not always operating at full capacity.

A spokesperson for Unilever, which makes brands such as Cif cleaning products and Domestos bleach, told the BBC that although the costs of raw materials were now at their highest for a decade, so far there has been relatively little impact from lockdowns in China.